Acasă Actualitate „We have to get rid of legacy things, … to go on... 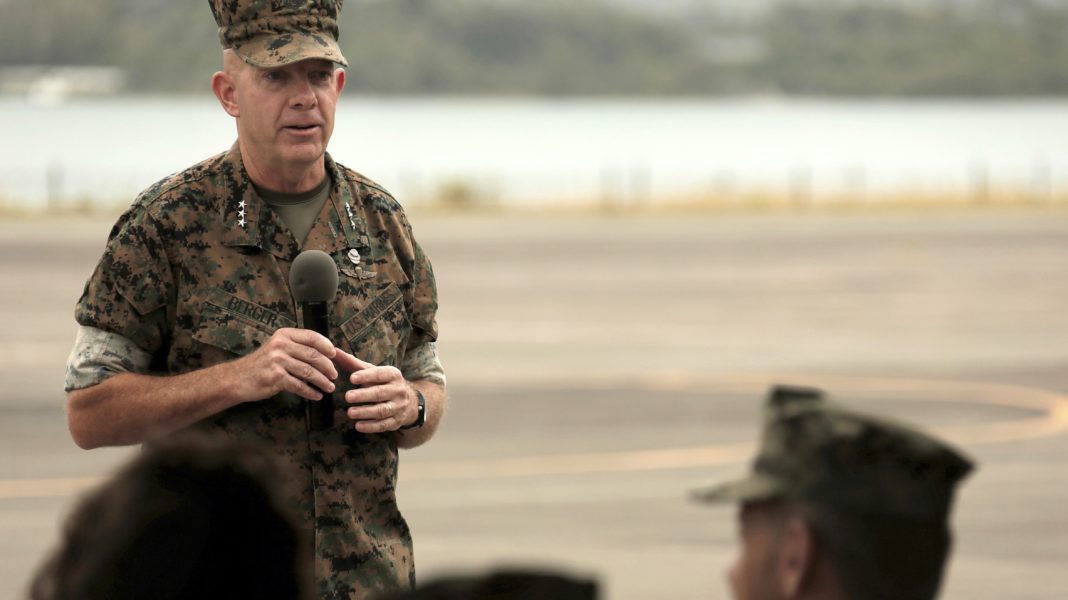 REAGAN NATIONAL DEFENSE FORUM: Gen. David Berger, commandant of the Marine Corps, says the service’s revamped force structure plan for 2030 — from organizational structure to weapon systems — will be finalized by early February.
The goal, he explained, is to remake the force into a “naval expeditionary force” that can hold the naval forces of an adversary at risk — both surface and subsurface. The Marines, he told reporters here on Saturday, have to figure out: “How do you build a capable expeditionary force that can operate within the threat and weapons engagement zone?”
“There are lots of changes we have to make,” he told reporters here today. “We have to get rid of legacy things, … to go on a diet.”
Specifically, Berger said he has his eyes on jettisoning “big heavy things, … big expensive things” and especially big, heavy and expensive “manned things.” This includes manned counter-armor systems, manned logistics vehicles and manned aircraft, he said.
And what do the Marines need to accomplish their transformation to fighting peer competitors such as Russia and China?
“Weapon systems that can find and kill enemy ships, at range, from ships or shore,” he said. In the interim, he said, this might include a Multiple Launch Rocket System (MLRS) on the back of a Joint Light Tactical Vehicle (JLTV).
In the longer term, he added, it might be something unmanned and autonomous.
“Picture in your mind some kind of vehicle, unmanned — perhaps autonomous,” Berger said. “It moves from this point to that on its own. Inside, it has more unmanned systems, ground and air. It’s launching them and recovering them and brining them back as a kind of mother ship.”
Berger noted that one of his biggest concerns is that the Corps is behind the curve in figuring out how to counter expected attacks on logistics trains.
“An area we are farthest behind in is logistics,” he said, noting wryly that the issue of logistics is “not fun to talk about.” But, he aid, “no one’s challenged our supply lines in 60 to 70 years;” so a lot of thinking must go into how to deal with that threat. One of the answers, he said, is dispersing forces. Another is rapid mobility.
Part of being able to understand capabilities gaps, he said, is experimenting and exercising. He mentioned the recently completed iteration of the annual Steel Knight exercise as one example. Steel Knight 2019 took place Dec. 6 along the California coast and across the western United States.
Breaking D readers also may remember that the Marines first tested Berger’s vision of a geographically dispersed Marine force arrayed against a peer competitor last month in the massive Marine Air-Ground Task Force Warfighting Exercise 1-20. Involving some 10,000 Marines, it was the Corps’ largest exercise in a quarter century.
Berger said that the Marines are in the end game of refining their decisions by pitting the proposed force structure against simulated adversaries in various scenarios “over and over and over.” The aim is to be confident that they have the right answers to be a able to “kill that, trim that down and add that.”
Berger said actual changes to the force structure will kick in during 2022, although smaller changes will be incorporated into the 2021 budget. The real structural realignment will be taking place between 2022 and 2024, he explained.
Part of the Marine’s new look will be closer integration with the Navy, especially as the Navy moves towards multi-domain operations. The two services want to more fully integrate their operations and spending, allowing the Marines to support the fleet from land using precision fires and F-35s based on small, ad hoc bases.
As Breaking D readers know, the Navy meanwhile is considering downsizing from its current goal of 355 ships, but it remains it remains unclear how many ships the Navy and Marines will need until the force structure plan is done and is fully vetted. (THERESA HITCHENS).