Acasă Actualitate Lockheed Martin delivered 134 aircraft this year: 81 to the US military,... 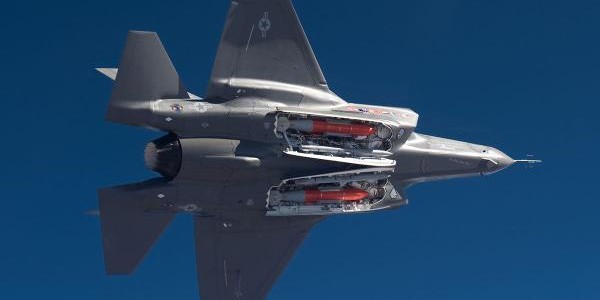 WASHINGTON: 2019 has been a pretty good year for the F-35 Joint Strike Fighter program. In October DoD announced a fairly dramatic rise in readiness rates, and yesterday Lockheed Martin announced it had exceeded its year-end delivery goal of 131 aircraft, pushing the per-unit price tag down to below the 2016 target of $80 million, a year earlier than planned.
Lockheed Martin delivered 134 aircraft this year: 81 to the US military, 30 to international partners and 23 to Foreign Military Sales customers, according to a company release. This represents a 47 percent increase from 2018, and nearly a 200 percent production increase from 2016. Next year, Lockheed Martin plans to deliver 141 F-35s, the release adds.
“This achievement is a testament to the readiness of the full F-35 enterprise to ramp to full-rate production and we continue to focus on improving on-time deliveries across the entire weapons system,” said Greg Ulmer, Lockheed Martin vice president and general manager of the F-35 program.
The per aircraft price for the multi-role fighter is now $77.9 million, a cost that is “equal to or lower than a less capable 4th Generation legacy aircraft,” according to Ulmer.
As Breaking D readers know, DoD for years struggled just to get its fleet of 440 F-35s in the air, with readiness rates at barely above half — 55 percent to be exact. One critical issue has been a seemingly endless shortage of parts, particularly the canopy adhesive related to the jet’s stealthiness, had effectively crippled the program.
And while readiness rates still haven’t met the 80 percent goal set by former Defense Secretary Jim Mattis, DoD acquisition chief Ellen Lord on Oct. 29 announced that F-35 readiness rates had jumped from the same time in 2018 to 73 percent.
In addition, congressional appropriators gave the Air Force a holiday gift in the 2019 spending agreement (signed into law by President Donald Trump on Dec. 20) : an additional $1.87 billion for 20 additional F-35s and associated spare parts. The appropriators added funds for 14 F-35A conventional takeoff and landing variant and six F-35B short takeoff/vertical landing variants. All total, the 2019 spending bill funded 98 aircraft — 62 F-35As, 16 F-35Bs, and 20 F-35Cs — at the whopping cost of $9.3 billion, crowning the F-35 as the biggest Pentagon procurement program ever.
While the spat with Turkey over its acquisition of the Russian S-400 air defense system led to the July decision by the White House to suspend Ankara from the F-35 program (and a loss of 30 aircraft sales for Lockheed Martin), Poland’s planned buy of 32 aircraft for $6.5 billion was approved in September.
And in November, Norwegian air chief Brig. Gen. Tonje Skinnarland declared Norway’s squadron of F-35As operational, placing Norway as the third European country to declare the plane operational, after the UK and Italy.
According to Lockheed Martin, there are now more than 490 F-35 aircraft operating from 21 bases around the globe; 975 pilots and 8,585 maintainers are trained; and the F-35 fleet has surpassed more than 240,000 cumulative flight hours. Further, “eight nations have F-35s operating from domestic bases, a base on their home soil, eight services have declared Initial Operating Capability and four services have employed F-35s in combat operations.”
Yep, it’s been a pretty good year for the F-35. (THERESA HITCHENS).