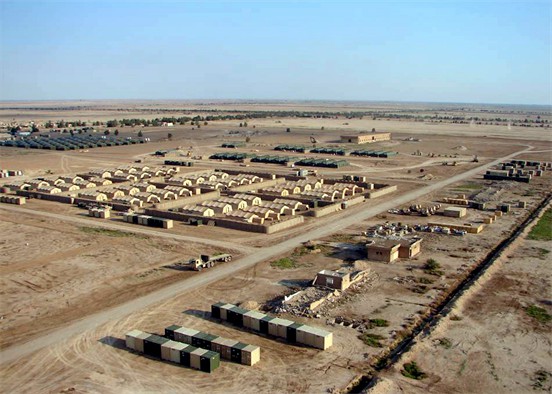 Forward Operating Base (FOB) Hammer, typical of a semi-permanent base in Iraq.
TEL AVIV: Contrary to declarations made by President Donald Trump, the U.S is not withdrawing forces from Iraq, but is building at least three semi-permanent new bases very close to the Iranian border in northern Iraq, Israeli sources tell Breaking Defense.
Tens of thousands of Iraqis marched in Baghdad on Friday calling for US forces to leave the country, but the protesters dispersed very quickly and were peaceful. And now Moktada al Sadr, the cleric who called for the protests, has withdrawn from the fray.
Israeli experts say that immediately after Trump’s declaration the U.S became aware that executing the decision would leave policymakers and the military with greatly reduced influence in a region that has seen rapid and extensive Russian penetration into the region.
After the assassination of Qassem Soleimani, commander of Iran’s Quds Force, the Iraqi government protested what it described as a “violation of international law” and its parliament passed a non-binding resolution calling for the withdrawal of US troops. Since, then the U.S. military has not withdrawn and indications are that the US presence will even become greater, exports here say.
The Iranian response to Soleimani’s killing resulted in the launch of ballistic missiles and cruise missiles at American bases in Iraq.The American base in Iraqi Kurdistan was also hit near the city of Erbil.
The US plans to establish one military base near the city of Sulimania, another large military base near the city of Halabja, which is only 14 km from the Iranian border, while the third military base is planning to set up south of the province of Erbil – Erbil.
Professor Uzi Rabi, director of the Moshe Dayan Center for Middle Eastern and African Studies, told Breaking Defense that the U.S has realized that withdrawing from Iraq will dramatically hurt the sanctions on Iran. “They have realized that in spite of the president’s declaration, they have to keep a real presence and they are doing it by building bases in the Kurdish areas. This was expected by anyone who really understand the powers operating in this strategic region,” the Israeli expert said.
Experts say that the assassination of the Quds force commander has made it more difficult for Iran to supply advanced missiles to the Houti rebels in Yemen.
The sources added that Soleimani was smuggling defense systems to Yemeni rebels loyal to the Iranian regime.
The operation was reportedly planned to be carried out by Unit 190 in the Revolutionary Guards, in charge of smuggling weapons to Iranian militia in the Middle East, with Soleimani in personal command.
The Israeli sources said the Iranian effort to arm its proxies in Iraq and Yemen forces the U.S to keep a military presence in the region. (ARIE EGOZI).