Acasă Actualitate Getting problem-plagued ballistic missile defense site online is an ever-higher-priority for the... 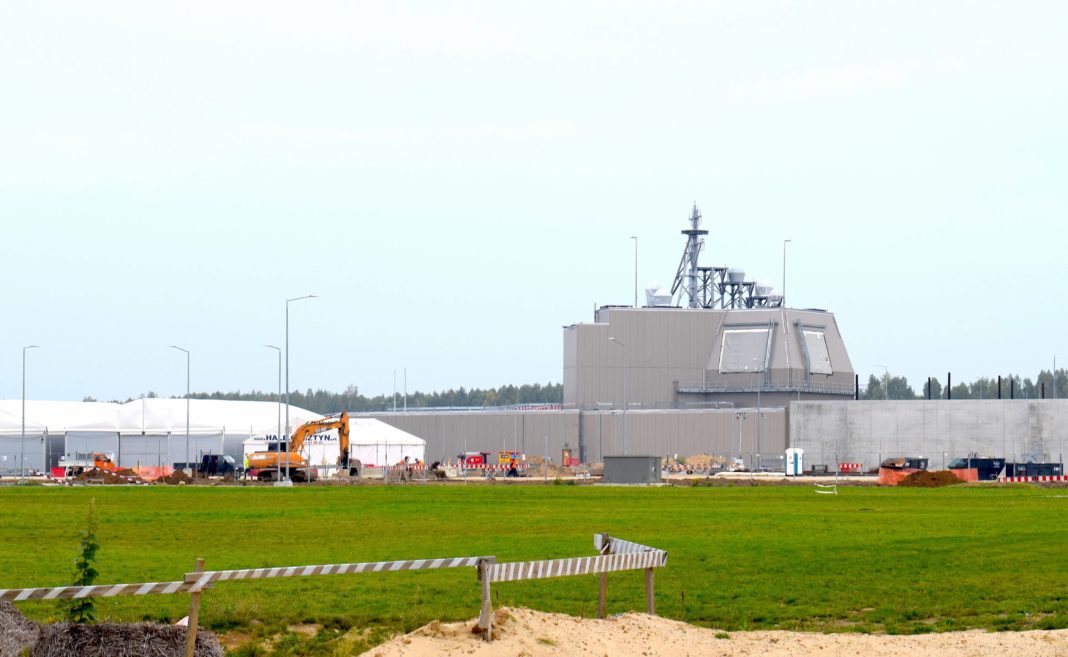 Aegis Ashore Missile Defense System site in Poland under construction last year
PENTAGON: The completion of a US-funded missile defense site in Poland – the bulwark of NATO’s eastern front – has been delayed for a second time, the head of the Missile Defense Agency said. US officials will decide this month if they need to find a new contractor to finish the project, originally slated to be completed in 2018.
The latest setback for the Polish Aegis Ashore site, designed to track and knock down Iranian intermediate-range missiles and provide a layer of security for Europe when combined with another Aegis site in Romania, will cost the US an additional $96 million in 2021. The completion date has also been pushed back to 2022, MDA director Vice Adm. Jon Hill, said this week.

CSIS graphic
Types and ranges of Iranian missiles (Graphic by Center for Strategic & International Studies)
The Government Accountability Office previously estimated the cost of the Polish site at $746 million before the latest cost increase; the additional $96 million would add 13 percent to the GAO estimate.
Problems at the site in Poland first came to light in 2018, but US officials at the time didn’t expect the construction issues to cost any more money than originally planned, and said they could get the site up and running by 2020.
The Aegis system in Poland is a key to completing the European Phased Adaptive Approach to countering the threat of intermediate-range missiles, which can travel up to 3,400 miles. The EPAA includes radar, missile and fire control sites in Romania and Poland; a ballistic missile defense radar in Turkey; and a command and control center in Germany. Spain also hosts several US Aegis destroyers at Rota.
During the rollout of the 2021 budget request at the Pentagon on Monday, Hill told reporters he is meeting with the Army Corps of Engineers in the coming weeks to decide whether to move on from the current contractor who has been unable to finish the work and find a new contractor.
“It’s tough, but we’ve got full agreement that something needs to be done. And so we’ll more than likely by the end of the month, have a ‘go path’ on what we’re going to go to,” he said.
Up to this point it has been unclear what has led to four years of delay and tens of millions of dollars in cost overruns, especially considering an Aegis Ashore site opened in Romania in 2016 without drama. But Hill said the majority of the base is done, and the Aegis SM-3 Block IB missiles are on site and in temperature-controlled storage. The problems, he explained, are the “auxiliary controls, you know, heating, power, cooling, the things that feed a combat system and that’s where that design and engineering that is inside that construction contract has slowed down and where the contractor is having problems.”
The original Aegis site was opened at the Deveselu Air Base in Romania in May 2016, to loud Russian objections. NATO insists the sites are being built to detect and counter Iranian missiles, contain no offensive capabilities, and couldn’t stop Russia’s massive arsenal of missiles, but Moscow has refused to accept NATO missile sites on former Warsaw Pact territory, calling it a “direct threat.”

Sydney J. Freedberg Jr. graphic from Google Maps imagery & data
Approximate ranges in miles between the Russian enclave in Kaliningrad and select NATO capitals. SOURCE: Google Maps
Since the work began on the NATO missile defense system, Russia has ramped up its own missile development and deployments. A report released by the Estonian government just today notes that Russia has short-range Iskander ballistic missiles permanently positioned 75 miles from the Estonian border and 28 miles from the Lithuanian border, “which allows Russia to threaten the territory of the Baltic states from two directions – from the oblasts of Leningrad and Kaliningrad – with these offensive weapons.”
Traveling with reporters to Brussels for NATO meetings Tuesday evening, Defense Secretary Mark Esper said the threat of proliferation of intermediate-range missiles is a global issue.

Sydney J. Freedberg Jr. graphic from Google Maps imagery & data
Approximate ranges in miles from Chinese territory to select US and allied targets. SOURCE: Google Maps
“Clearly, I’m more concerned about Asia, Indo-Pacific, where China has easily over a thousand of these missiles,” he said. “We are also working — it’s built into our budget — on how do you defend against these types of missiles? And that certainly will be part of the dialogue because you know, many of our NATO partners are concerned the Russians have these systems deployed, have had them deployed in violation of the treaty. And so how do we defend against them.”
Moscow has used the Aegis site in Romania as the pretext for stationing Tu-22M3 bombers in Crimea, and has said the site could be used to launch missiles into Russia, despite the protestations from NATO and the US that the system is purely defensive.
Overall, the 2021 request for Aegis missile defense is $1.8 billion to continue upgrades to the ship and land-based Aegis weapon system and procure additional missiles, including 34 Aegis SM-3 Block IB missiles for deployment on land at the Aegis Ashore sites in Romanian and Poland and at sea on Aegis ships. (PAUL MCLEARY).