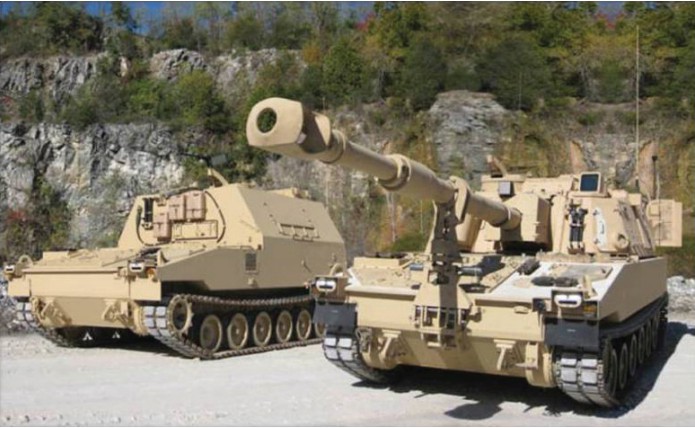 WASHINGTON: After 100 years of hauling 100-pound howitzer shells by hand, Army gunners are about to get some high-tech help. Last week, representatives from six small and mid-size tech companies trudged through the mud with soldiers at Fort Bliss, Tex., so they could watch close-up as troops moved 155 mm shells from pallets to their M109 Paladins. The six firms are under 12-week, $150,000 contracts to refine their ideas to augment or replace human muscle at every stage of the loading process, part of the Field Artillery Autonomous Resupply (FAAR) initiative run by Austin-based Army Futures Command.
“For every projectile that goes down range, that projectile is picked up no less than five different times by a soldier and moved manually – and each one of those projectiles is 100 pounds,” Maj. Chris Isch told the Army’s in-house news service. “We are looking for ways to automate that as much as possible.”

Robotic logistics, from self-driving supply trucks to AI predicting engine breakdowns, lacks the ominous glamour of so-called killer robots. But the sheer complexity of identifying friend or foe amidst the chaos of combat, and deep-rooted Pentagon policy on human control of lethal force, mean that autonomous weapons will take much longer to develop than autonomous supply and support systems, some of which are already in field-tests.
That said, Field Artillery Autonomous Resupply would definitely mark the Army more deadly. Artillery historically kills more troops than any other branch, and after years of letting Russia pull ahead in range and volume of fire, the Army is urgently upgrading its guns. The service’s No. 1 modernization priority is what it calls Long-Range Precision Fires, and while hypersonics and post-INF Treaty missiles have dominated the headlines, the LRPF portfolio also includes conventional howitzers. The Army had already begun upgrading the hull and automotive systems of its venerable M109 armored howitzer vehicle under its Paladin Integrated Management (PIM) program. Now it’s looking to upgrade the gun and turret under what’s called Extended Range Cannon Artillery.
Between a longer barrel, precision guidance and new rocket-boosted shells, ERCA has already doubled the Paladin’s range, from 30 km (19 miles) to 62 km (39 miles) in test-shots at Yuma Proving Ground. The goal is to double it again, to over 120 km (75 miles).
ERCA also plans to add an autoloader mechanism to feed the gun, instead of humans manhandling shells into the breech. That should increase the rate of fire from four shells a minute to 10. Assuming standard high-explosive rounds, that means the ERCA gun can go through 950 pounds of ammo in 60 seconds and a ton in just over two minutes.
How do you feed such a beast? Currently, ammo is shipped in crates and pallets to (relatively) safe supply dumps in the rear, where troops load the individual shells into a purpose-built armored vehicle for transport to the front. That M992 ammo hauler has an extendable conveyer belt to transfer shells directly into the howitzer vehicle, but the belt doesn’t always work that well in the field. Besides, the ammo hauler holds 95 rounds of high explosive and propellant, which would blow up horrifically if hit, so a standard tactic is to park the ammo transport under cover, well away from the guns, and have soldiers schlep the shells.

The Army’s multidisciplinary Cross Functional Team for Long-Range Precision Fires, already working on multiple missiles at once, couldn’t develop the ERCA gun and a new loading system at the same time, an officer explained at an AUSA robotics conference last fall. So the team turned to a sister organization within Army Futures Command, the Army Applications Lab, whose in-house Army Capabilities Accelerator reaches out beyond traditional defense contractors to universities, startups, and smaller firms, especially ones which have little experience working with the military.
Five Functions, Six Firms, 12 Weeks
The Applications Lab came up with the Field Artillery Autonomous Resupply concept and sought proposals to revolutionize every step of the process. An online solicitation lists five key functions:
Robotic ammo handling and transport for the supply depot to move shells from crates & pallets to the ammo vehicle, or even carry it directly to the gun;
Small unmanned ground vehicles or even drones to drive or fly a few shells at a time – at least 150 pounds payload, i.e. one shell plus packaging — from the ammo vehicle to a gun at least a kilometer away;
Automated ammo handling for inside the M109 howitzer itself, not only auto-loading the shell into the breech, but also setting charges, adjusting propellant loads for range, and more;
Exoskeletons, both powered and passive, to help soldiers handle 100-plus-pound objects without fatigue – the main limiting factor on sustained fire – or injury; and
Command & Control systems to coordinate munitions delivery when GPS and radio are being jammed, including self-directing robot swarms.
The response was vigorous: 83 submissions from 43 states and multiple foreign countries, which the Army weeded down to the six firms that went out to Fort Bliss last week. Each got a $150,000 contract to spend 12 weeks gathering feedback and refining their designs, with a final brief to the Army in Austin on April 1st. (UPDATE: Technically, the six firms are all subcontractors to Alion Science and Technology, which is administering the program for the Army). The Army will then decide which, if any, should advance further towards actual production.
The six companies in the current phase?
Actuate (formerly Aegis) develops computer vision software that analyzes surveillance feeds in real time to detect intruders and firearms. They’re based in New York City, hardly the usual breeding ground for defense contractors.
Apptronik builds exoskeletons and “human-centered robotics” designed to work with people. It’s a four-year-old spin-off of the University of Texas at Austin. The Army picked Austin to be Futures Command’s home town precisely because it’s a hub of high-tech innovation with few existing ties to the military.
Carnegie Robotics in Pittsburg is a decade-old spin-off of Carnegie Mellon University’s National Robotics Engineering Center. CMU has a strong relationship with the Army and is now host to the Army AI Task Force.
Neya Systems, also in the Pittsburgh area, develops aerial drones and off-road robots. It’s a division of employee-owned defense contractor Applied Research Associates.
Hivemapper is a Silicon Valley firm that turns surveillance video – including from drones – into digital maps, automatically updated by change-detection algorithms, for both the private sector and the Pentagon.
Pratt & Miller Engineering, based in Detroit and South Carolina, and most famous for its work on race cars, whose seven-ton EMAV robot just won a field-testing contract for the Army’s experimental Robotic Combat Vehicle – Light.
Now, the RCV is still experimental, and Pratt & Miller’s win hardly guarantees a production contract, it makes sense for them to offer a variant of the same robot for the artillery resupply program. It would definitely be simpler and cheaper for Army logisticians to use the same robotic chassis for both armed vehicles and ammo haulers.

“It’s about creating direct, candid engagement between commercial solvers and Army problem owners to open the aperture on the realm of the possible,” said Porter Orr, production innovation lead at the Army Applications Lab, in a statement to Breaking Defense. “The capability presentations …on April 1st…will be used to help shape thinking and inform future requirements, at a minimum.”
“While it’s possible that a single, ‘perfect’ piece of hardware could come from the FAAR cohort, that’s not the marker of success,” Orr continued. “Rather, it’s about giving Army stakeholders better access and insight into commercial solutions with a low, upfront investment, while also creating channels that make it easier for non-traditionals to work with the Army. The FAAR cohort is the first to launch as part of this new model, but the intention is that it will not be the last.”
Corrected 10pm to remove references to the Small Business Innovation Research (SBIR) process: While the Field Artillery Autonomous Resupply (FAAR) initiative is also exploring the use of the SBIR process, the contracts discussed in this article were awarded under a different vehicle. (SYDNEY J. FREEDBERG JR.).