Acasă Actualitate „NTS-3 is all about getting the data to the warfighter fast,” says... 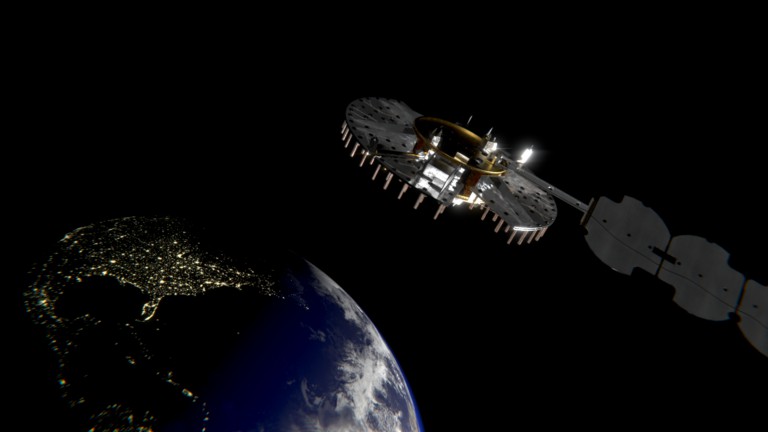 L3Harris NTS-3 satellite illustration
AFA 2020: Not only will the Space Force’s new positioning, navigation and timing (PNT) constellation, called NTS-3, provide jam-resistant capabilities to troops on the battlefield, the satellites will be able to rapidly redeploy to provide coverage where it’s most needed, says Bill Gattle, president of L3Harris Space Systems. “NTS-3 is all about getting the data to the warfighter fast,” he told me in a phone interview today.
NTS-3, being built by L3Harris under an $84 million contract, is one of the leap-ahead technology programs called Vanguards managed by Air Force Research Laboratory (AFRL). It is designed “to fill the gap” in current Global Positioning System satellites (GPS III) capability by rapidly bringing online the long-delayed, anti-jam M-Code for military users, he explained. It should launch in 2023.
Currently, full M-Code accessibility won’t be available until the follow-on GPS IIIF satellites, being built by prime contractor Lockheed Martin with L3Harris’s navigation payload, are launched around 2025.
“M-Code was first talked about in the mid-90s. It actually started development in the mid-90s,” Gattle said. “You’re talking 25 years, and we still don’t have it.”
The Space Force has asked Congress in its 2021 unfunded priorities list for an extra $30 million to accelerate payload development; the budget request only includes $4.4 million.
The new constellation will comprise a minimum of four — perhaps up to eight — satellites in Geosynchronous Orbit (GEO, some 36,000 kilometers in altitude) rather than in the Medium Earth Orbit (around 20,000 kilometers) where other GPS satellites orbit, Gattle said. Using GEO allows regional coverage with fewer satellites; the current GPS systems needs a minimum of 24 satellites to provide a global signal.
Moreover, the flying saucer-shaped satellites are small, and thus can be launched rapidly and cheaply, he said. The design is based on the so-called Espa rings used by SpaceX on its Falcon 9 to launch multiple satellites at once.
“It would not be hard to launch four to eight on a [single] rocket,” Gattle said. “It saves money and time.”
While the highly maneuverable birds can shift their coverage from one regional hot spot to another, they need to start somewhere. At the moment, Gattle said, AFRL hasn’t chosen which region the satellites will be initially deployed over — although he noted it is likely to be either the Indo-Pacific or Centcom’s areas.
In addition to being maneuverable, the navigational payload is fully digital — unlike current GPS satellites — so software can be upgraded as new capabilities are developed. This, Gattle said, will allow the satellites to keep pace with the threat.
Digitizing the Mission Data Unit (MDU) at the heart of the NTS-3 navigation payload provides the ability to change the satellite’s frequency to avoid jamming, he explained, and to increase power to blast the navigation signal through the white noise a jamming system creates.
“NTS-3 will experiment with a new digital signal generator that can be reprogrammed on-orbit, enabling it to broadcast new signals, improve performance by avoiding and defeating interference, and adding signatures for detecting spoofing attacks,” according to an AFRL fact sheet.
NTS-3 is the first “major DoD SatNav developmental program for experimentation since” 1977. NTS-1 was developed by the Naval Research Laboratory (NRL) and launched in 1974 with two experimental technologies that helped improve the precision of GPS. NTS-2 launched in 1977.
Braxton Technologies, of Colorado Springs, was picked in June 2017 to build ground stations for NTS-3 to allow testing of the satellite and the ground stations at the same time.
Interestingly, L3Harris has built the navigation system for every GPS satellite launched, and will do so for all 32 of the new versions currently planned. It also is moving toward digitizing the GPS navigation systems
The current GPS III satellites have an MDU that is 70 percent digital, according to the company’s website. There will be 10 GPS III satellites built; L3Harris has delivered the navigation payloads to Lockheed Martin for eight.
Two GPS III satellites are already on orbit, Gattle said, and a third is slated for launch in April.
Another two are slated for launch between April and early 2021. In addition, the Space Force’s unfunded priorities list for 2021 has asked Congress for another $255 million to speed the launch of the sixth and seventh GPS birds.
L3Harris also announced on Feb. 11 that it has passed Critical Design Review for a fully digital MDU for integration with the follow-on GPS IIIF satellites. L3Harris is under a $243 million contract with Lockheed Martin to provide the navigation systems for the first two of 22 planned GPS IIIF satellites.
The Space Force’s 2021 budget request also asked for $628 million to begin procurement of two GPS IIIF satellites. (THERESA HITCHENS).

Amidst the usual calls for government reform and corporate responsibility, the Cyberspace Solarium Commission makes...

Israeli sources said the Saudis had no clue something might happen