Acasă Actualitate „At this point we don’t want to see an either/or — we... 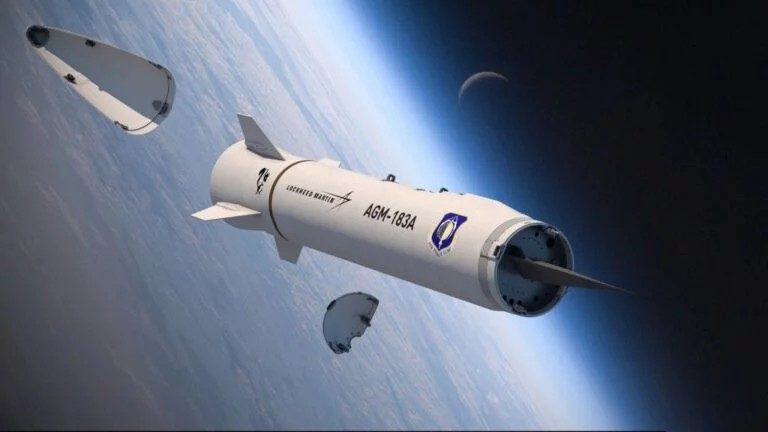 Lockheed Martin’s Air-Launched Rapid Response Weapon (ARRW)
PENTAGON: Hypersonic missiles will be deployed across the Army, Navy, Air Force and Marines, not as “niche” weapons but as a broad new capability, according to DoD’s two top officials charged with managing department wide development efforts.
“It’s not going to be one or two hypersonic weapons,” Mark Lewis, director of modernization at DoD’s Research and Engineering office headed by Mike Griffin, told reporters here today. “Hypersonics isn’t a single thing. It’s a range of capabilities. It’s intermediate range. It’s long range. It’s things coming off of ships. It’s things coming off of trucks. It’s things coming off the wings of airplanes and out of bomb bays.”
Lewis said the Pentagon’s focus this year on hypersonic weapons — weapons that can fly faster than Mach 5 — will be on transitioning from science and technology development work to prototype weapons that can be used in the field by all of the services.
https://youtu.be/wO9-EfPZPC8
Hypersonic weapons, and the technologies to counter them, are one of 11 cross-cutting modernization priorities that Lewis is managing. The Army, Navy, Air Force and DARPA all have at least one, if not more, efforts to build hypersonic missile capabilities. The Missile Defense Agency and the Space Development Agency (both of which fall under Griffin’s oversight) are working on technologies to detect and target enemy hypersonic missiles.
“I don’t know of any other part of the modernization portfolio where I see such close coordination between the services and the agencies,” said Lewis.
For example, DARPA’s Hypersonic Air-Breathing Weapons Concept (HAWC) — an air-breathing cruise missile — is first going transition to the Air Force, said Mike White, Lewis’s assistant director for hypersonics. “But we’re also looking at some other configurations that have a broader range of capabilities.” Indeed, Sydney reported way back in 2018 that DARPA has been hoping to interest the Navy in the concept as well.
White said one of the advantages of the Air Force having canceled its the Hypersonic Conventional Strike Weapon (HCSW), which was being designed as a boost-glide system rather than a cruise missile, is that the service can now focus on transitioning the HAWC program into an Air Force program of record.
White said that the advantages of an air-breathing cruise missiles are that they are smaller, more affordable and fit on a wider range of platforms. Thus, they can be carried on fifth-generation fighter jets and bombers in large numbers. Finally, he said, it is easier to put a seeker on a cruise missile.
On the other hand, Lewis added, the boost-glide variants have longer ranges. “That’s why at this point we don’t want to see an either/or — we actually want to see both technologies pursued,” he said.
Indeed, DoD also hopes DARPA’s Tactical Boost Glide will find its way into the arsenals of services besides the Air Force, even though the primary transition program is the Air force’s Air-Launched Rapid Response Weapon.
“There is DARPA work going on to look at using alternative launch platforms and alternative basing needs for the TBG,” White said.
Lewis said DoD’s hypersonic efforts further include figuring out how to build up an industrial base that can “produce hypersonic capabilities at scale.”
To that end, DoD acquisition czar Ellen Lord has put together a “hypersonic war room” headed by Lewis and her assistant secretary Kevin Fahey that is now in the midst of a study to look at “what is the state of our base, is it positioned to produce at the scales that we are anticipating?” The study also will look at where DoD needs to invest to ensure that the base is ready. That study, Lewis said, should be done within “the next couple of months.” (THERESA HITCHENS).