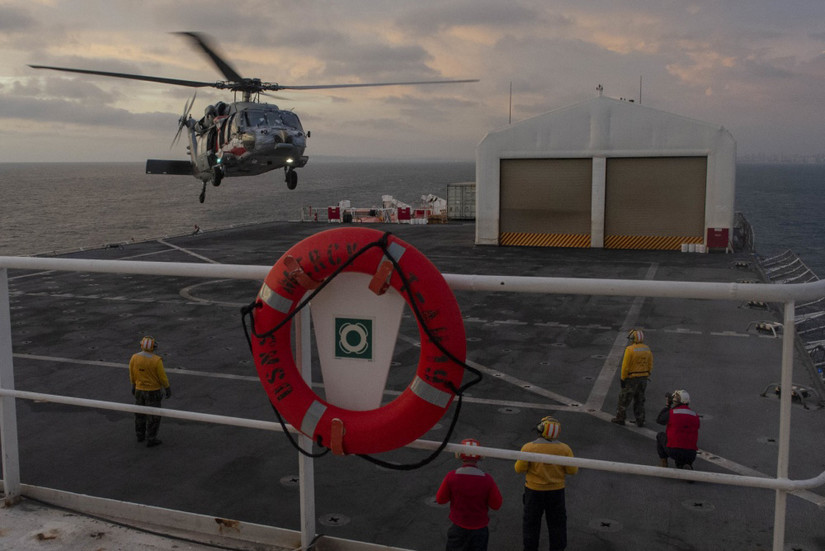 Coronavirus: DOD Response
The Defense Department is working closely with the Department of Health and Human Services and State Department to provide support in dealing with the coronavirus outbreak.
USNS Mercy to Care for Non-COVID-19 Patients in Los Angeles

In a matter of days, the Navy hospital ship USNS Mercy will sail from San Diego and dock in the port of Los Angeles to help lift the burden from local medical treatment facilities that need to focus their resources on patients affected by the coronavirus pandemic, a Navy official said recently.
Navy Rear Adm. Timothy H. Weber, commander of the Naval Medical Corps Pacific and director of the Medical Service Corps, spoke with reporters at the Pentagon by telephone to update them on the Mercy’s plans. He was joined by Navy Capt. (Dr.) John R. Rotruck, the ship’s commanding officer.

More than 800 medical professionals, assembled over the last few days, will embark on the Mercy, the admiral said. The doctors, nurses, corpsmen, other medical professionals and mariners will help communities hard hit by the COVID-19 pandemic, he added.
The Mercy normally handles combat casualty care, and its crew will not treat patients with the coronavirus, the admiral said. The ship and its staff will offer a broad range of medical and surgical support, with the exceptions of obstetrics and pediatrics.
Nearly 60 of the medical staff members are military reservists, Weber said. „We are honored to answer the call in a time of need,” he added.

„Today is a big day for the Mercy, Navy medicine and our national response to the coronavirus,” Rotruck said.  He noted that Los Angeles has seen some of the greatest impacts of the COVID-19 pandemic to date.
„We will be ready on arrival to support [the Federal Emergency Management Agency] and state and local efforts to protect the health of the American people in this whole-of-government approach directed by the president of the United States,” the captain said.

„We are not treating COVID-19 patients, and we are taking proactive measures to ensure anyone coming aboard is properly screened,” Rotruck said. The Mercy has infectious disease prevention measures that will be followed just as any hospital ashore would, he added.
„We will be bringing relief to where we are needed most,” the captain said. The Navy’s hospital ships are uniquely outfitted, for humanitarian and disaster relief, and those serving on the ships are highly skilled and highly trained, he added.
Stoltenberg Charts NATO’s COVID-19 Progress, Announces Survey Results

In the midst of the coronavirus pandemic, NATO is doing what it does best — working together to confront threats, Secretary General Jens Stoltenberg said.
The secretary general spoke March 19 at the alliance’s headquarters in Brussels as he unveiled the alliance’s 2019 annual report. „This is a global pandemic, which affects us all,” he said. „I express my condolences to those who have lost loved ones; my solidarity with all those who suffer from the virus; and my gratitude to the health workers and all those on the front line, who are fighting this crisis day and night often in very difficult conditions.”

Stoltenberg also commended military personnel in allied nations who are supporting efforts to combat the virus.
He said this is a time when resilience is tested to the limit, and when many NATO allies are having to make unprecedented decisions with tough social and economic consequences.
The alliance is working to limit the spread of the virus to reduce the risks to soldiers and civilians. But NATO still must ensure that its essential work continues to maintain deterrence and defense for allied nations, the secretary general said.
Stoltenberg  noted that some alliance personnel have tested positive and that some exercises have been modified or cancelled. Still,  he said NATO’s ability to conduct operations has not been undermined. „Our forces remain ready, and our work goes on,” he said.
Stoltenberg shifted to discuss his annual report on the alliance.

He called last year a time of great strides in adapting the alliance.He also spoke of a survey the alliance conducted last year as NATO marked its 70th anniversary. For the survey, 29,000 people across the alliance were interviewed. Stoltenberg said 81% of respondents believe the collaboration between North America and Europe on safety and security is important. „Allied citizens strongly agree with the core principle of collective defense,” he said.

A total of 76% believe their NATO allies would defend them if they are attacked, he said, and 71% agree that their own country should act in defense of another ally.
Finally, a clear majority — 64% — would vote to remain in NATO, and only 9% would vote against remaining, the secretary general said. „So while results naturally vary across different countries, overall support for the NATO alliance is strong,” he added.
„In 2019, we further boosted our investment in defense — spending across the alliance has increased in real terms by 4.6%,” Stoltenberg  said. „We continued to strengthen our deterrence and defense, delivering on our readiness initiative and increasing our ability to move our forces across the Atlantic and in Europe,” he said.
Alliance nations were united in calling out Russia’s violation of the Intermediate-range Nuclear Forces Treaty. „We remained committed in the fight against terrorism with our training missions in Afghanistan and in Iraq,” he said. „We enhanced our resilience by updating the baseline requirements for telecommunications infrastructure, including 5G, and we declared space as our fifth operational domain alongside land, air, sea and cyber.” Dumitru Sorin).