Acasă Actualitate DoD didn’t rule out changing its mind about whether Amazon or Microsoft... 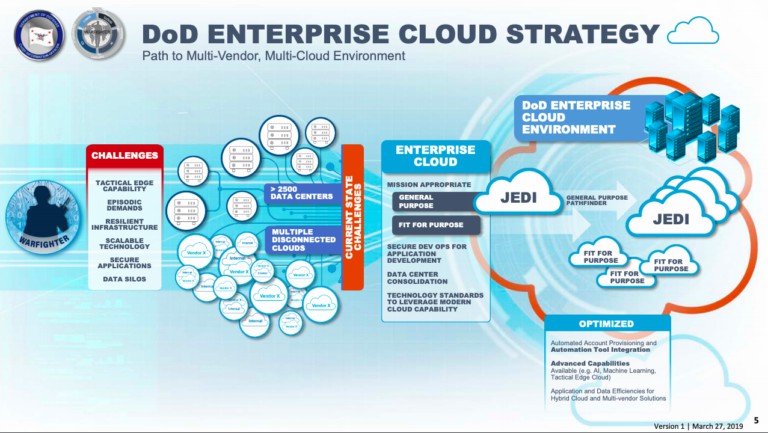 What it did rule out, unambiguously, was splitting the award between them.

DoD graphic
The Pentagon’s plan to consolidate many — but not all — of its 500-plus cloud contracts into a single Joint Enterprise Defense Infrastructure (JEDI). Note the suggestion that the single “pathfinder” contract for JEDI might evolve into multiple JEDI contracts.
UPDATED with detail of court ruling WASHINGTON: The Defense Department has no intention of splitting the Joint Enterprise Defense Infrastructure contract between Microsoft Azure and Amazon Web Services, a Pentagon spokesman told me this morning.
Amazon is suing the Defense Department to overturn the award, potentially worth $10 billion if all options are exercised, to Microsoft. In his email to me, public affairs officer Lt. Col. Robert Carver did not rule out the possibility that the award would be overturned, only the possibility that it would be split.
Carver was responding to speculation that a court motion earlier this month signaled a willingness to divide the contract between Microsoft and Amazon. True, the Defense Department has indeed filed a formal motion asking for a chance to “reconsider” certain technical aspects of the award to Microsoft that the judge had deemed questionable. But that narrowly phrased request does not mean the Pentagon is reconsidering the fundamental principle underlying JEDI, a principle upheld in a previous federal case: a single award to a single vendor.
With over 500 cloud-computing contracts already awarded by one agency or another across the sprawling Defense Department bureaucracy, DoD wants to replace as many of them as possible – but, explicitly, not all – with a single “general purpose cloud,” a common default option, run by a single contractor.
Here’s the core of Lt. Col. Carver’s response, emailed to Breaking Defense this morning after a week of back and forth:
“If the Motion for Voluntary Remand is approved by the Court of Federal Claims, DoD will conduct a re-evaluation of the existing proposals and, where appropriate, revised proposals, to ensure that the Court of Federal Claims’ noted concerns are addressed…. the re-evaluation will consist of an evaluation of the existing proposals, as well as narrowly-tailored revisions to the proposals,” Carver writes. “The Department will make a new award decision based upon those re-evaluations, which will be in conformity with the solicitation requirements and stated evaluation criteria. DoD will not ‘split the award,’ as the requirement remains for a single award and the solicitation calls for a single award.”

A Narrow Motion
How did we get here? In October, after much controversy, legal maneuvering, and delay, the Pentagon awarded the contract to Microsoft Azure. That shocked observers who’d presumed the favorite was Amazon Web Services, which had created a similar common cloud for the CIA and other intelligence agencies. Amazon soon filed suit, arguing President Trump’s unprecedented public criticism of their proposal had tilted the scales, which DoD denies.
What happened next? “On February 13, 2020, the Court granted AWS’s motion for a preliminary injunction, finding, among other things, that AWS would likely be able to show that DoD erred in evaluating the offerors’ proposals for Factor 5, Price Scenario 6,” as the Pentagon’s March 12th motion to reconsider put it. “[Accordingly], defendant, the United States, respectfully requests that the Court remand this case to the Department of Defense (DoD or agency) for 120 days to reconsider certain aspects of the challenged agency decision.”
Wedbush Securities analyst Daniel Ives, as was reported in the trade press, argued that this willingness to reconsider signaled that the Pentagon was preparing to split the buy and get the program moving again rather than spend months in litigation.
The Pentagon made it clear in its motion it’s only reconsidering limited aspects of the award. It also wants to limit the ability of either Amazon or Microsoft to update their original proposals.
Specifically, “DoD wishes to reconsider its evaluation of the technical aspects of Price Scenario 6, and intends to issue a solicitation amendment and to accept limited proposal revisions addressing the offerors’ technical approach to that price scenario…under both Factor 5 and Factor 9,” the DoD motion continues. “DoD also wishes to reconsider its evaluation of the offerors’ online marketplace offerings [and] to reconsider its award decision in response to the other technical challenges presented by AWS. DoD does not intend to conduct discussions with offerors or to accept proposal revisions with respect to any aspect of the solicitation other than Price Scenario 6.”
“A remand here is in the interests of justice because it will provide the agency with an opportunity to reconsider the award decision at issue in light of AWS’s allegations, this Court’s opinion, and any new information gathered during the proposed remand,” the DoD motion says. “During the proposed remand, the agency potentially could make decisions that would moot this action, in whole or in part, and may obviate the need for further litigation in this Court.”
None of this is admitting any error on the Pentagon’s part, an earlier statement to reporters emphasized. “While we disagree with the Court’s decision, we must address the findings in the Court’s Order with the intent of ensuring our warfighters will get this urgent and critically needed technology as quickly and efficiently as possible,” this statement ran. “As such, the Department determined that the best and most efficient path forward is to conduct a re-evaluation of the proposals in order to address the Court’s noted concerns.”
“The Department maintains the JEDI Cloud contract was awarded based upon a fair and unbiased source selection process,” the statement continues. “The process consisted of a fair evaluation of proposals based solely on the solicitation’s stated criteria and the proposals submitted.”
In other words: The Defense Department doesn’t think they did anything wrong on JEDI, but since the judge had a problem with one specific part of how they awarded the contract, they’re asking to fix that specific part.
And then what?
Well, it’s possible that the Defense Department could voluntarily withdraw its award to Microsoft and give the contract to Amazon. But given their confidence in their own judgment, that does not appear likely.
In our analysis, here’s the scenario the Pentagon is probably hoping for. They fix what the judge disliked about their selection process, they re-do that piece and Microsoft still comes out the winner, at which point they ask the judge to dismiss Amazon’s case.
The Pentagon isn’t conceding defeat on JEDI, not yet.
UPDATE It’s worth noting that the judge hasn’t yet ruled on whether there are any other errors in the Pentagon’s decision, only that the one error it’s found so far justifies a preliminary injunction: “Because the court finds the error with regard to defendant’s evaluation of intervenor-defendant’s Factor 5, Price Scenario 6 is sufficient to justify preliminary injunctive relief, the court does not evaluate in this opinion the remainder of the errors alleged by plaintiff.” So there could be another nasty surprise for the Pentagon yet to come. (SYDNEY J. FREEDBERG JR).