Acasă Actualitate After two years of intensive digital engineering, in 2020 the Army will... 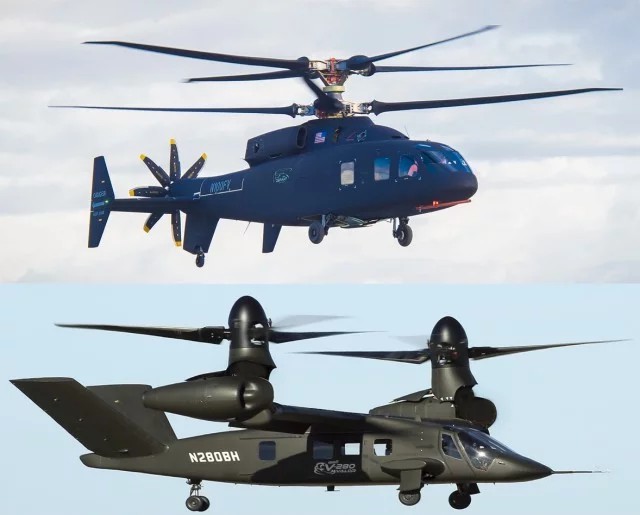 Army graphic from Bell & Boeing/Sikorsky photos
The two contenders for the Future Long-Range Assault Aircraft (FLRAA): The Sikorsky-Boeing SB>1 Defiant compound helicopter (top) and the Bell V-280 Valor tiltrotor (bottom)
WASHINGTON: A Sikorsky-Boeing team won a $97 million award to refine their SB>1 Defiant high-speed helicopter over the next two years, the Army announced today, while Bell Textron won $84 million for its V-280 Valor tiltrotor. The two designs are vying to replace the Reagan-era UH-60 Black Hawk, the Army’s workhorse air assault and medevac transport.
The difference in amounts purely reflects the different approaches the two teams proposed for what’s called Competitive Demonstration & Risk Reduction, Army officials told reporters. It doesn’t imply either team has an advantage going into 2022, when the service will choose one design as its Future Long-Range Assault Aircraft (FLRAA), with the first operational units flying in 2030.

FLRAA is just part of the flying “ecosystem” of manned and unmanned aircraft that the Army is developing under its Future Vertical Lift Cross Functional Team, which in turn is just one of eight CFTs working on 31 high-priority projects. But FLRAA has been unusually visible, literally, because – as part of a program called the Joint Multi-Role Tech Demonstration – both companies have prototype aircraft actually flying.
As we’ve reported previously, the SB>1 Defiant started flight tests a year later than the V-280 Valor, but Army officials reasserted today they’ll have enough test data on both aircraft.
“The flight envelope continues to expand for Sikorsky-Boeing, so they’re flying a bit more aggressively now than the V-280,” said Brig. Gen. Walter Rugen, head of the FVL CFT. “Towards the end of this fiscal year, maybe August, we’re going to see very comparable data on both.”
“Flight time is only one of the inputs that goes into a multivariable non-linear calculation,” added the Army’s aviation acquisition chief, Program Executive Officer Pat Mason. Not all flight hours are equally valuable, he told reporters, and flight hours alone are not enough. “[It’s] what you did in flight, what you’ve done in modeling and simulation, how you’re administering model design, how you [set up] your digital engineering development environment, what you’ve done in your component test, lab test, SIL [System Integration Lab] test. Taking the totality of those elements into consideration, what we see is a good competition between two vendors.”
So while the two aircraft will continue flying to provide more performance data, the lion’s share of the work over the next two years will be digital, explained the Army’s program manager for FLRAA. “The preponderance of this effort is associated with digital engineering and model-based systems engineering,” Col. David Philips said. That means taking the real-world data from physical tests and rigorously refining every aspect of the design to meet the Army’s needs from flight performance, combat survivability, affordability, sustainability, safety and more.
The program’s reached the phase of design refinement that’s traditionally handled by engineers with slide rules on “reams of paper,” Mason explained, but which will now be accomplished in painstakingly precise virtual models and simulations of every aspect of the aircraft.
“That is the future of design,” Mason said. “The key is that digital environment…. digital engineering and model-based engineering.”
The flight tests of physical aircraft are proving out their novel configurations – designed to achieve high speed and long range that are aerodynamically unattainable for conventional helicopters. But the digital design phase is especially suited for working out the software that’s essential to everything from flight controls to navigation to evading incoming anti-aircraft missiles.

Rather than have each vendor fit the electronic jigsaw together in their own unique, proprietary way, the Army insists that FLRAA, its sister design the FARA scout, and a whole family of drones all use the same Modular Open Systems Architecture. MOSA is meant to ensure that all the aircraft can easily share data on everything from maintenance diagnostics to enemy targets, and that the Army can easily replace specific components (hence “modular”) using whatever vendor offers the best technology (hence “open”).
To ensure different vendors’ products plug and play together, Mason said, “we specify what we need in those interfaces, and we flow those out in models.” Those models will include simulations of the aircrafts’ physical characteristics, but, since they’re software themselves, they can contain the actual prototype code for the Modular Open Systems Architecture.
In other words — let’s get digital. (SYDNEY J. FREEDBERG JR.).

Our first responders and medical heroes are trapped on a figurative beach as the crest...