Acasă Actualitate The company is using extensive automation and a new generation of high-efficiency... 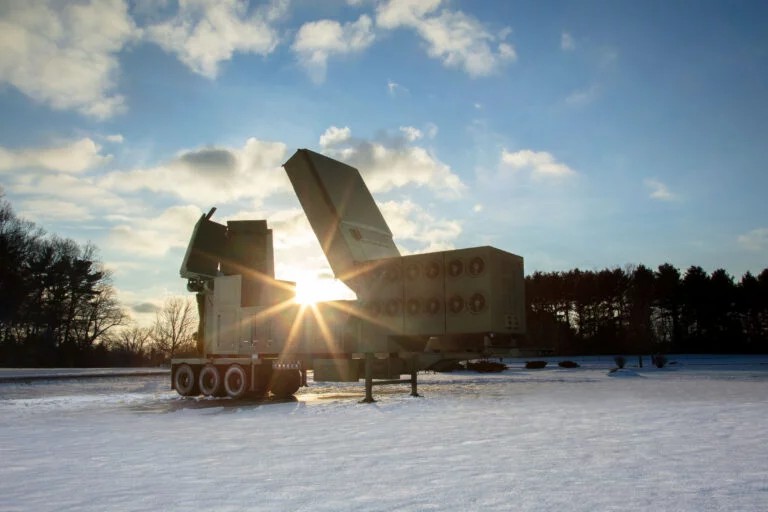 WASHINGTON: Last October, the Army gave Raytheon a new kind of contract for a new kind of radar. Originally envisioned as simply an upgrade for the iconic but aging Patriot missile defense system, the Lower-Tier Air & Missile Defense Sensor has evolved into a multi-purpose radar that can share data with multiple kinds of command posts and launchers, not just Patriot, over the Army’s new IBCS network. Its components use gallium nitride (GaN), instead of the traditional gallium arsenide (GaS), which means less electrical energy wasted as heat and more pouring out of the radar to detect incoming threats at greater distances.
The program also takes a new approach to acquisition, using both the Other Transaction Authority (OTA) and Section 804 Mid-Tier Acquisition processes to shortcut around the cumbersome conventional process known as DoD 5000. Even the manufacturing process uses new forms of automation to speed up the process, helping to meet the Army’s ambitious timeline.
In this interview, sponsored by Raytheon, the company’s Integrated Air & Missile Defense director, Bob Kelley, talks to Breaking Defense about what makes LTAMDS different.
Q: What’s special about the way the Army and Raytheon are developing LTAMDS?
A: I think this is a great example of an Other Transaction Authority and Section 804 type of rapid prototyping program. It’s very ambitious to go from a sense-off in the spring/early summer timeframe at White Sands Missile Range in 2019, to fielding radars to US Army soldiers in 2022. It is an ambitious schedule, but thus far we are on or ahead of schedule.
I think a lot of that has to do just with the level of collaboration and transparency that you get from these types of acquisition programs. The OTA is a rapid prototyping program. This is not a [standard] 5000-series DOD acquisition program.
The Army is looking for an urgent material release in fiscal year ’22. And so, you back that up, you’ve got to deliver radars for testing in ’21, and you had contract award in October of ’19.
Within 4 months of contract award, we had the first main array antenna, the one that goes on the front – there are two smaller ones to the rear. The first large front array is complete. Call it a prototype zero. That will be ready to start running contractor tests on this year.

Q: What’s your manufacturing process like to build these systems?
A: We have our own nationally certified GaN Foundry on our site of our manufacturing facility in Andover, Massachusetts. So we’re literally manufacturing the GaN chips about a couple hundred yards away from where we turn those into circuit cards, so that we can make GaN radio frequency elements to go onto the front of a radar antenna.
So once those GaN chips are made, they come over to the circuit card assembly line, and from that point on there is very little touch labor. What you have is you have people that are supervising machines that are making these chips. It’s not that people can’t make great circuit cards, but you’re going to be far more efficient and you’re going to make a lot more.
The machines are calibrated that every single card will be identical. Now, you need the humans there to make sure that it’s identically right, not identically wrong, because if the first one’s wrong they’re all going to be wrong. But we take a lot of steps with a lot of quality control and testing to make sure that those are all done properly.
Something else that’s new this time around is adding some larger robots to our factory. We literally have a robot taking those circuit cards — that were assembled on a circuit card assembly line by machines — and delivering those circuit cards to another robot, and that robot will put them in place and install them on onto the radar.
It allows us to have more identicality throughout the entire manufacturing process, but also to manufacturer these products much faster.
A Patriot radar is still a very viable radar on the battlefield today, and we have partners that are purchasing them, but there’s a lot of human touch labor on there, because some of the designs are a few decades old. This makes it so that we can create and manufacturer a radar in a much shorter period of time — and that’s one of the things that is what’s allowing us to go quickly here and meet the Army’s ambitious timeline.
Q: You mentioned Gallium Nitride – why is your ability to make that for LTAMDS so important?
A: From our perspective, it’s the power efficiency. So our radar takes power in and then it needs some of that power to power all the internal systems inside the radar: There’s a whole bunch of signal processors, there’s a cooling system — just like your car, there’s all these auxiliary things that have to be operating to make the radar work.
Then you’re left with an amount of power that you are going to try to turn into radio frequency power, to push out and do things that radars do – detect, identify, classify, discriminate. The ranges and altitudes that you can do that at is a function of the efficiency of your RF transmitters and how much power you’re putting in.
What you’ll see with gallium nitride is the efficiency, the output, the power output efficiency is unparalleled by any technology that’s out there today. With the same amount of input power, you can see much further, see much higher and see much clearer.
That’s important when you want to build a ground-based air defense radar that has to be able to be driven around, that you want to be able to deploy on, say, a C-17 aircraft from the United States to some hotspot in the world. Well, that will limit you on the size that your radar can be.
What you want to have is the most efficient radar that you can make, so with that size you can get the most performance and capability out of your radar. And we believe that’s what we’ve done.
This is not our first gallium nitride radar we’ve made. But with the improvements we’ve made to our gallium nitride over the past five to 10 years, we’re calling this next-gen GaN technology. The efficiency on this radar far exceeds the efficiency on any other GaN radars that we produce. The main LTAMDS array is roughly the same size as the array on a Patriot, but provides more than twice the performance of the Patriot that’s out there today on the battlefield.

Q: What’s the importance of the side arrays? Patriot didn’t have them.
A: The battlefield used to be linear – the good guys were on one side, the bad guys were on the other side – so bad things were going to come at you from generally the way you were facing. Well, the battlefield is nonlinear today. Now I can maneuver these missiles to attack from any direction I want. I know what your capability for sensing is; if I want to stay out of that, go all the way around you and come in from the rear, I can do that to you.
You can be attacked by tactical ballistic missiles, cruise missiles, electronic attack in the form of jamming, UAVs, fifth gen fighters. And they can bring them all in the same time and space to overwhelm your sensor capability. It’s gotten to the point now, with the evolution of the threat and where the threat is going, that there is a requirement to have 360 degree protection. That’s why we ended up with three fixed and staring arrays, so that we are always looking in all directions.
Q: It’s not just about LTAMDS itself – you also have to make this work with Northrop Grumman’s Integrated Air & Missile Defense Battle Command System network, IBCS.
A: There’s a lot of intersections with IBCS as it gets ready to go into its limited user test, coming up in the next couple of months. This is the first US Army radar that is being designed and manufactured to be a native to the IBCS network. With Patriot and Sentinel, there are these adaptation kits that will adapt those radars and those shooters to the IBCS integrated fire control network. Those kits are not required with this radar: It is being designed and optimized specifically to operate in that network.
It was actually part of the requirement: You had to demonstrate that you understood how to do that and make it happen.
We get the interface document from the United States government and they say, “This is what you have to interface with.” It’s that simple.
[Editor’s note: IBCS is a Northrop Grumman product, not one of Raytheon’s, but the US government owns the necessary data rights and can share the interface control documents with other contractors whose products need to plug in. That’s actually a novel approach to contracting and central to the military’s pursuit of interoperable open architecture.]
This interview transcript was edited for clarity and brevity. (SYDNEY J. FREEDBERG JR).

„I have mobilized the Department of the Air Force into a wartime acquisition posture,” said...