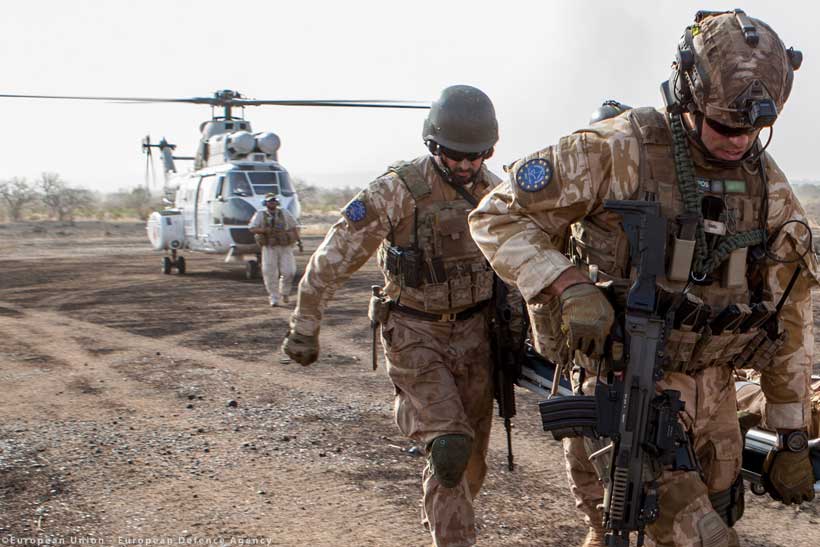 Building on the experience of EU civilian and military operations in 2003 and on the discussions on these two issues between the UK, France and Germany, this paper sets out how the collective capability of the EU can be strengthened, including the ability to plan and run certain operations, and describes how consideration of the options involved would take place between EU Partners and NATO Allies.

NATO is the forum for discussion and the natural choice for an operation involving the European and American allies. In accordance with the EU/NATO permanent arrangements adopted in Nice, in a crisis contacts and meetings will be intensified so that EU and NATO can discuss their assessments of the crisis and clarify their intentions regarding possible engagements. The experience of 2003 shows that these arrangements are fundamentally sound, providing for intensified consultation, while respecting fully the decision-making autonomy of both organisations.

Where NATO as a whole is not engaged, the EU, in undertaking an operation, will choose whether or not to have recourse to NATO assets and capabilities, taking into account in particular the Alliance’s role, capacities, and involvement in the region in question. That process will be conducted through the “Berlin plus” arrangements.

In order to improve the preparation of EU operations having recourse to NATO assets and capabilities under Berlin plus arrangements, we propose that a small EU cell should be established at SHAPE and to invite NATO to establish liaison arrangements at the EUMS. It will also ensure full transparency between EU and NATO embodying their strategic partnership in crisis management.

We also propose to enhance the capacity of the EUMS to conduct early warning, situation assessment and strategic planning through the establishment within the EUMS of a cell with civil/military components. It will in particular: –

· Link work across the EU on anticipating crises, including opportunities for conflict prevention and post-conflict stabilisation;

Regarding the conduct of autonomous EU military operations, the main option for this will be national HQs, which can be multi-nationalised for the purpose of conducting an EU-led operation.

In certain circumstances, the Council may decide, upon the advice of the Military Committee, to draw on the collective capacity of the EUMS, in particular where a joint civil/military response is required and where no national HQ is identified.

Once such a decision was taken, the civilian/military cell in the EUMS would have responsibility for generating the capacity to plan and run the operation. This would not be a standing HQ. Rather it would be a capacity rapidly to set up an operations centre for a particular operation. The centrewould operate separately from the strategic role of the EUMS, under a designated Operation Commander. This would require the necessary resources, including augmentation personnel, to be made available at short notice, by the EUMS and member states. A core staff, essentially “double hatted” from the EUMS, would be required to maintain the necessary level of readiness. To that effect the personnel of the EUMS could be reinforced, if necessary.

In the light of the lessons learned, further developments of the scope or nature of this capacity could be examined. It would require further decision by the Council.(Simona T.).

See the Future of Vertical Lift in Action!