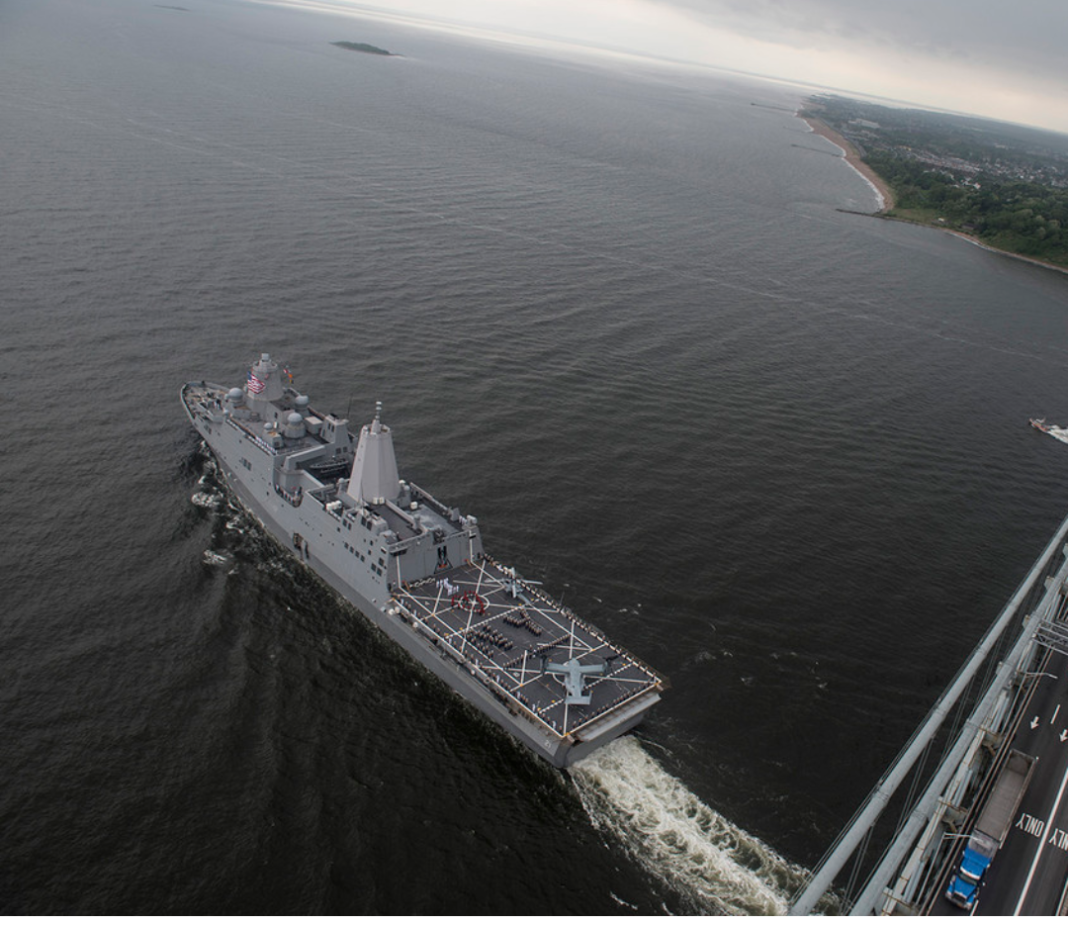 Its motto is simple and powerful:

Anyone who boards the US “Strength forged through sacrifice. Never forget.”

The U.S. Navy’s USS New York, an instrument of freedom and peace, was commissioned Nov. 7, 2009 in New York City. Cutting through the water with a bow forged from 7.5 tons of World Trade Center steel, the USS New York carries much more than just the name of the Big Apple wherever it travels.

The USS New York runs very much like the bustling city it’s named for; it’s the ship that never sleeps! From bow to stern, take a USS New York minute to catch up with crew members.

This sleek San Antonio-class landing platform, dock vessel has the primary mission of carrying Marines and equipment anywhere in the world. It can remain under the radar and place many Marines on the beach very quickly to build combat power ashore before the enemy is even aware.

The crew of nearly 400 sailors and Marines will tell you that what’s special about this ship is what it stands for.

The skipper may be in charge of any ship, but the USS New York or any other Navy ship doesn’t sail without boatswain’s mates. Boatswains, or “bosun” and “boats” as they are known in the Navy, form the core of a ship’s manpower. These sailors are in charge of how the ship runs by taking care of the entire ship, performing many of the crucial tasks required to put and keep it underway. Boatswain is the original “rate,” or job, from which all others diverged as sailors’ duties became more specialized.

Anyone who boards the USS New York will, as the ship’s motto says, “Never Forget.” Reminders of Sept. 11, 2001, extend beyond the ship’s bow, built with 7.5 tons of World Trade Center steel.

A steel plate recovered from the World Trade Center rubble is displayed above one of the most-used passageways.

A firefighter’s helmet reminds sailors of the first responders who sprung to action.

Even the ship’s daily prayer ritual—the chaplain chooses the name of someone who died in the attacks to honor—makes it impossible to forget.

“I know we’re not going to be immune from design flaws,” Air Force RCO head...

The SecDef wants more money for the Navy’s shipbuilding account, and one way to get...