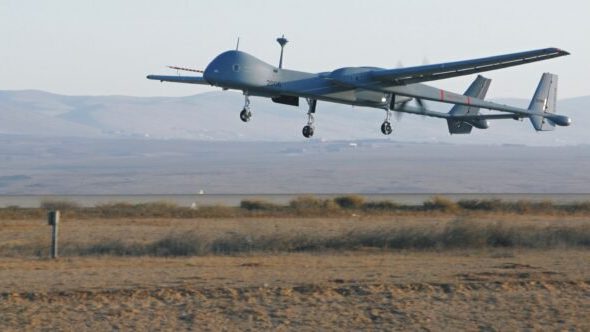 “Last year 78 percent of the IAF’s operational flight hours were performed by UAS. This year the number jumped and is 80 percent,” Lt. Col. S. told me at the Tel-Nof Air Force base, where the largest Israeli drone, the Heron-TP flies from. Breaking Defense was granted exclusive access to the White Eagle squadron there.

TEL-NOF AIR BASE: Israel’s Air Force, long dominated by some of the world’s best fighter pilots, has completed the shift from pilots to drones, with more than 80 percent of all Israeli Air Force flight hours executed by unmanned aircraft.

“Last year 78 percent of the IAF’s operational flight hours were performed by UAS. This year the number jumped and is 80 percent,” Lt. Col. S. told me at the Tel-Nof Air Force base, where the largest Israeli drone, the Heron-TP flies from. Breaking Defense was granted exclusive access to the White Eagle squadron there.

The Heron, the squadron commander said, is performing a long list of missions, including many that were performed until recently by manned aircraft. The IAF has already replaced some manned squadrons with new UAS squadrons to perform the same missions. Reflecting this shift, the number of Herons, a Medium Altitude Long Endurance (MALE) drone, has grown by 50 percent recently. Its flight hours have soared by more than 25 percent since the beginning of 2018. “Some of the force’s manned squadrons, can perform similar missions to the ones we perform, but we have the advantage of long endurance,”  Lt. Col. S. said.

Israel Aerospace Industries (IAI) builds the Heron. The aircraft’s maximum takeoff weight of has ballooned to 11,904 pounds — an increase of 881 pounds — allowing the addition of more refined and, presumably, power-hungry sensors. The aircraft also has a longer loiter time since it can carry more fuel.

“Most of our missions require long endurance and high altitude. The max operational altitudes of the UAS is up to 45.000 feet,” the squadron commander said. “The high degree of redundancy put into this UAS enables very long, uninterrupted missions, some times under very complex conditions.”

After an interview in the commander’s office, we headed out to the flight line. Some Heron-TP’s were being prepared for flight. What was obvious is the huge compartment in the fuselage that can house a variety of payloads. I asked about specific “boxes” in the fuselage. The squadron commander just smiled: “We have here what we need.”

These drones are deployed on many missions, including persistent surveillance of areas such as Syria where the Iranians are upgrading rockets to be used by the Hezbollah in Lebanon and the Sinai desert.

The timeline of Leonardo DRS’s 50 years of innovation is peppered with notable technologies and capabilities that have given militaries around the world a warfighting edge. Here’s a look.

On the tarmac, technicians tested a 1200HP PT6 engine. The power plant allows the Heron to fly as fast as 220 knots and go up to 45,000 feet, the commander said.

What was missing in the view around us when we walked on the tarmac was the presence of the “outside pilot,” using controllers that are required for many other drones. This job has been eliminated because the Heron-TP uses an automatic takeoff and landing system, which also functions in inclement weather. To begin a mission, the commander simply pushes a button. The large drone taxis out of its hangar, continues to the runway and takes off. The same sequence is used once the mission is complete.

While takeoff and landing are automated, Lt. Col. S escorted me to an area where a mission commander and a payload operator command the drone after takeoff. They sit in front of screens and joy sticks.

On this day, German pilots were being trained in an adjacent control station. Germany has leased Herons for a nine-year stretch from Israel for operations in Mali and Afghanistan. The German version can carry “unique air-to-ground missiles,” according to German sources. But they have not yet used an armed version. For the next two years, the Germans will remain in Israel.

So far no decision has been made to arm the German drones. (Arie Egozi).