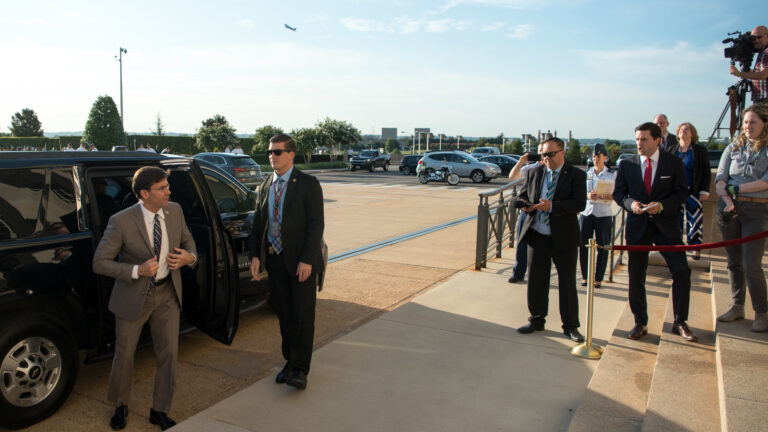 London is on the verge of a much-delayed and debated decision about allowing Huawei to build “non-core” components of its 5G network.

Secretary of Defense Mark Esper arrives at the Pentagon for his first day, July 24, 2019.

While Esper didn’t say so aloud, this almost certainly included a plea to the UK government as it wrestles with whether to allow 5G tech from Chinese tech giant Huawei, which is now fighting heavy US sanctions. He’s also likely to have leaned on Germany, which recently rolled out its own 5G system while warning of threats from unspecified “nation-states.”

A big part of the problem with vague concept of “non-core”? One of 5G’s defining features is that it blurs the digital division of labor between the network’s core and individual cell towers. 5G makes the towers much more capable and gives them new roles, not just in smartphone networks, but in omnipresent Internet of Things functions on household devices and modern cars.

The 5G issue is one Esper tactfully did not raise in public during an earlier speech in London on the Chinese and Russian threats. That makes it all the more surprising he mentioned it in today’s remarks at a domestic cybersecurity conference hosted by the Homeland Security Department just outside DC.

“Our ability to share information and operate on common communications networks serves as a force multiplier – but, it also comes with increased risk,” Esper said this afternoon. “To guard against this, we must help our allies develop their own cyber resiliency. One of the ways we are doing this is by encouraging them to maintain secure and reliable networks, particularly with respect to future telecommunications infrastructure. This is especially critical for countries with whom we have strong defense relationships.

“Two weeks ago, I traveled to Europe where I spoke with a couple of our NATO allies about the risks associated with allowing Chinese companies to develop 5G networks in their countries,” Esper continued. “The PRC is perpetrating the greatest intellectual property theft in human history. Every Chinese company has the potential to be an accomplice in Beijing’s state-sponsored campaign to steal technology.

“Nations that partner with Chinese firms put the security of their networks at risk,” Esper concluded. “This not only jeopardizes military interoperability and intelligence sharing, but can also compromise commercial institutions such as banks, hospitals, and media outlets. This is why it is so important that we work together from the very start to preserve the integrity of our cyber networks.”

The Context: From Ren Zhengfei to Boris Johnson

Although Esper did not mention Huawei by name, it is the most prominent of the Chinese companies suspected of planting backdoors in their code on behalf of Beijing’s espionage agencies, and the Trump administration has both banned any Huawei sales in the US — where it already had very little market share — and many US exports to Huawei — including critical software and hardware components the Shenzhen-based company would be hard-pressed to replace.

The company’s founder and CEO, Ren Zhengfei — whose own daughter and heir-apparent was arrested in Canada last year at Washington’s urging — recently warned his employees it was in a “live or die moment” and then made a public offer to license the company’s 5G technology to all comers. (Even if the business deals could be worked out, fixing the security vulnerabilities would be a bear).

While Prime Minister May leaned towards letting Huawei in, her successor — and longtime Trump ally — Boris Johnson reportedly came under heavy US pressure to ban the Chinese firm, with the longstanding US-UK intelligence sharing agreement and perhaps the trade deal Johnson needs so desperately thanks to Brexit both potentially on the line. Johnson’s defence secretary, Ben Wallace, recently called for Huawei to show “fair play” if it wanted access to Britain. But he acknowledged the final decision has been delayed by the crisis over Brexit.

Meanwhile, the National Security Advisor who carried Trump’s warning on Huawei to London, John Bolton, has since been ousted by the mercurial president. That leaves Esper, who’s served in the Pentagon since 2017, as a key voice of continuity in the campaign to contain China launched by his predecessor, Jim Mattis.( Sydney J. Freedberg Jr.).

How do you keep a laser focused on a target moving at hundreds of miles...

The Defense Department is shaping the joint all-domain environment by tying sensors to shooters in...