INCISIV National
Acasă Actualitate A new system will retrain 20,000 DoD employees to work within the... 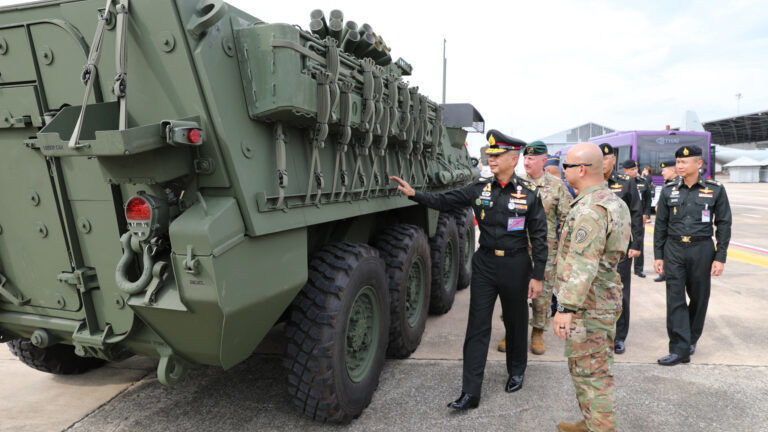 THE PENTAGON: In tandem with the Pentagon’s latest update of its civilian casualty policy, the way the US prioritizes and sells weapons overseas is also undergoing a series of deep reforms to more closely align sales with broader US policy objectives, and curb potential misuse by allies.

Lt. Gen. Charles Hooper, director of the Defense Security Cooperation Agency, cut the ribbon Wednesday on the brand new Defense Security Cooperation University, an effort launched under his direction to bring the 20,000 US government employees involved in the security cooperation effort into the fold, and more closely align their work with Pentagon doctrine and overall strategic direction.

Speaking to a small crowd at the event near the Pentagon, the DoD’s chief policy official, John Rood, offered a vision of a world in flux that makes such changes necessary. “The world is changing. Some of the global power that our traditional allies used to exercise has eroded a bit, and we’re seeing other countries where we have a budding relationship” gaining in economic, political, and military might, he said.

Rood singled out India as an emerging ally “that’s really growing…so tapping into that, building security cooperation activities [with] Vietnam and other emerging partners” that are rapidly modernizing is critical to keep US influence in the world from waning as the economic clout shifts.

His comments largely reflect 2018’s National Defense Strategy which acknowledged the hard truth that countries like China have emerged as major economic and military rivals, forcing Washington to lean into that competition. Part of the new way of doing business means US policymakers will ask allies to assume a greater role in providing regional security to counter Chinese and Russian influence — while buying American gear instead of cheaper kit from China or Russia.

The school — actually a collection of existing offices across the country tied together by a virtual network of new training activities — is being run by longtime Pentagon official Cara Abercrombie. She said that the immediate goal is to certify 20,000 government employees over the next two years in the new curriculum.

Part of Hooper’s vision is to revamp the training for both US officials and allies on avoiding civilian casualties by understanding and adhering to the laws of war.

In a solicitation posted to a government contracting website in May, the DSCA said it’s looking to award “a possible contract to improve international partners’ capabilities to prevent civilian casualties and mitigate other harm to civilians that may arise from partner security operations.” The solicitation is broad, asking for ideas for everything from helping foreign countries investigate civilian casualty incidents, to identifying technologies that can guide weapons operators, how to predict collateral damage, and new ways to inform the public about operations.

Like the Pentagon’s new top-to-bottom effort to prevent civilian casualties, DSCA has hosted a series of public information sessions with the human rights community to help develop new training programs to push the legal and ethical use of US-provided weapons. A DSCA spokesperson described it as “a robust effort to enhance our building of foreign partners’ capacity to prevent civilian casualties associated with the use of U.S. provided systems and capabilities.”

In the end, however,  the US government’s commitment to demanding allies use US-made weapons in accordance with the law of war has been uneven. The Trump administration has expressed little concern over selling arms to Saudi and the UAE even as their war in Yemen has killed thousands of civilians over the past four years using American-made aircraft and bombs. An attempt earlier this year by Congress to block arms sales to Saudi was vetoed by President Trump, sending a clear signal as to Washington’s ultimate priorities.

Despite that, Hooper’s office has brought aboard a former Air Force intelligence officer, Loren Voss, to act as senior advisor for Civilian Harm Mitigation. Voss, who worked for Central Command and in the Executive Office of the UN Office for the High Commissioner for Human Rights, came aboard in May. A DSCA spokesperson emailed that the job includes efforts “to lead the community to find practical ways to build this important partner capacity through the development of policies, processes, and programs.”

Speaking after the ribbon cutting event, Abercrombie told me the school’s coursework will revolve in part around “the strategic perspective of how security cooperation aligns with our national strategic objectives. This is not just about an individual foreign military acquisition or sale.” She added that part of the new training will include “a basic level awareness of cultural differences and cross-cultural communication” skills for officials assigned to specific regions.

The DSCA’s efforts come in part as a response to the Conventional Arms Transfer Policy signed by President Trump in April 2018, which calls for the US to “facilitate ally and partner efforts, through United States sales and security cooperation efforts, to reduce the risk of national or coalition operations causing civilian harm.”

Asked earlier this year about tension between the White House and the Hill over the sale of weapons to Saudi Arabia and the kingdom’s use of those munitions in Yemen, Hooper acknowledged there’s “an inherent tension in what we do,” because, while the US wants to equip allies, “we want to make sure that those weapons and articles and services are used in a responsible manner, in a manner that is consistent with our values. Sometimes that is tough.”

The HAC report rebukes the Air Force for a lack of transparency in shifting spending...