Acasă Actualitate The question is, does this emperil Turkey’s NATO membership? 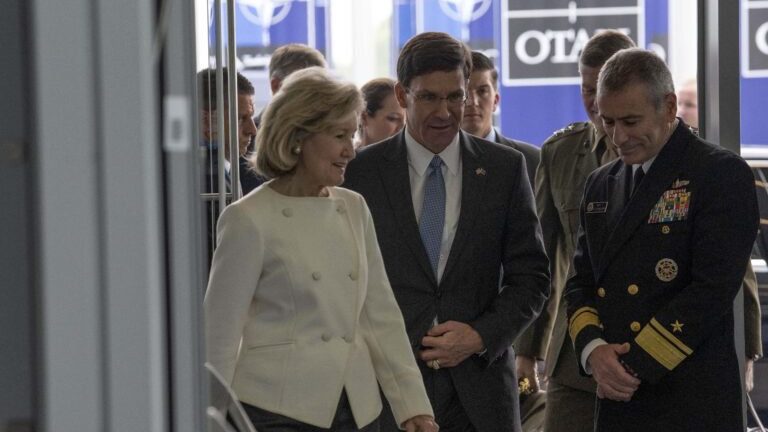 WASHINGTON: Defense Secretary Mark Esper will travel to Brussels next week to demand NATO members implement “collective and individual diplomatic and economic measures” on Turkey as punishment for its incursion into Syria, he said today in a statement, setting in motion a process that could lead to historic penalties against a NATO ally.

It’s not clear what exactly those penalties might be, but a number of NATO states have already halted weapons sales and military aid to Ankara, as Congress readies its own punishing round of sanctions on the Turkish military that would effectively cut it off from the West.

The Trump administration today imposed a slew of economic sanctions on Turkey raising steel tariffs by 50 percent and halting negotiations over a $100 billion trade deal with the country. The Treasury Department also levied sanctions on Turkey’s ministries of defense and energy, as well as three senior Turkish officials.

Overseas, the European Union and some NATO countries have already started to move. EU foreign ministers today unanimously condemned Turkey’s bloody incursion, which has already seen its proxy forces film a roadside execution of a Syrian politician, as well as those of a number of Kurdish fighters. The Turkish actions “seriously undermines the stability and the security of the whole region,” the ministers said, but they stopped short of issuing a EU-wide arms embargo against Ankara.

NATO members Germany, France, Norway and the Netherlands have already stopped shipping weapons to Turkey. German media reports the country exported $268 million worth of weapons to Turkey in 2018, about one third of Ankara’s total military imports, and in 2019 Germany was Recep Tayyip Erdagon’s biggest supplier of military hardware.  EU members Sweden and Finland have also halted arms shipments.

In Washington, the White House sanctions, meant to stem the blistering criticism President Trump has received from his own party for abandoning the Kurds after several years of relying on them as the blunt instrument to take Raqqa and other areas from the Islamic State, was met with an unenthusiastic response from some top Republicans on Capitol Hill.

Senate Majority Leader Mitch McConnell, normally a staunch Trump ally, said today “withdrawing U.S. forces from Syria would re-create the very conditions that we have worked hard to destroy and invite the resurgence of ISIS.” Leaving the field in the hands of Russia and the Syrian government, which has a long and bloody history of horrific human rights abuses, “would also create a broader power vacuum in Syria that will be exploited by Iran and Russia, a catastrophic outcome for the United States’ strategic interests.”

The top Republican on the House Foreign Affairs Committee, Mike McCaul, was also unimpressed. “We appreciate the Administration’s planned sanctions, but it does not go far enough to punish Turkey for its egregious offenses in Syria,” he said.

The fast-moving response to Turkey’s invasion of northeastern Syria over the weekend, meant to push formerly US-backed Kurdish fighters away from its border, is threatening to further isolate a NATO state that has been bucking the alliance for several years.

Turkey’s purchase of the Russian S-400 air defense system severely strained relations with the rest of the alliance, leading to the Trump administration to take the extraordinary step of removing it from the F-35 program earlier this year.

In a statement pulling no punches in criticizing the country with NATO’s second-largest military, Esper said “President Erdogan bears full responsibility for [the invasion’s] consequences, to include a potential ISIS resurgence, possible war crimes, and a growing humanitarian crisis. The bilateral relationship between our two countries has also been damaged.”

Monday evening, a senior administration official confirmed that all US troops, except perhaps those at the southern at Tanf base, are leaving Syria. “US forces are currently executing a deliberate withdrawal from Syria,” the official said, but when pressed, wouldn’t qualify how many, or if Tanf is being abandoned.

Another official pled American impotence in the face of Turkey’s decision to move into Syria with thousands of Free Syrian Army fighters, many of whom have radical Islamist sympathies. “Nothing we did one way or the other was going to deter the Turks from doing what they were going to do,” the official said. “Erdogan was going to act regardless of what we did.”

Italy: dozens of mafia bosses could be released due to coronavirus