Acasă Actualitate Only one contender for the Army’s future scout is derived from an... 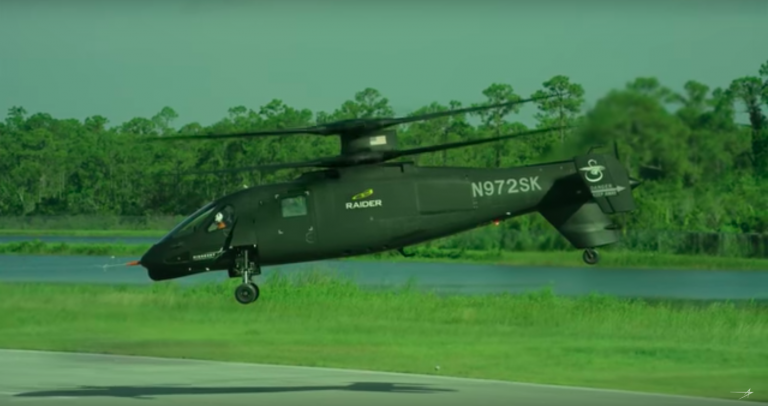 AUSA: Sikorsky’s Raider-X compound helicopter is one of highest-profile contenders for the Army’s Future Attack Reconnaissance Aircraft. While three of the four other competitors on FARA — AVX, Bell, and Karem, but not Boeing — have unveiled their designs, only Sikorsky’s is derived from a real aircraft already flying.

Specifically, Raider-X is basically a scaled up version of the smaller but essentially similar S-97 Raider (pictured below for comparison). While S-97’s history has been mixed, with one of the two prototypes totaled in a (fortunately non-fatal) accident two years ago, the fact that it actually exists and is making test flights gives Sikorsky a double advantage, First, it gives them real-world data to refine their simulations and engineering design. Second, it gives the Army tangible evidence that the design works, with its novel mix of ultra-rigid coaxial rotors and a pusher propeller in the back for thrust.

Our own Rick Whittle conducted an in-depth interview on Raider-X with Sikorsky’s lead test pilot, Bill Fell, and flew in Sikorsky’s FARA simulator at AUSA — check out the video above.

A new system will retrain 20,000 DoD employees to work within the National Defense Strategy,...

DoD has “so many hundreds of programs that we really couldn’t do a fair evaluation...