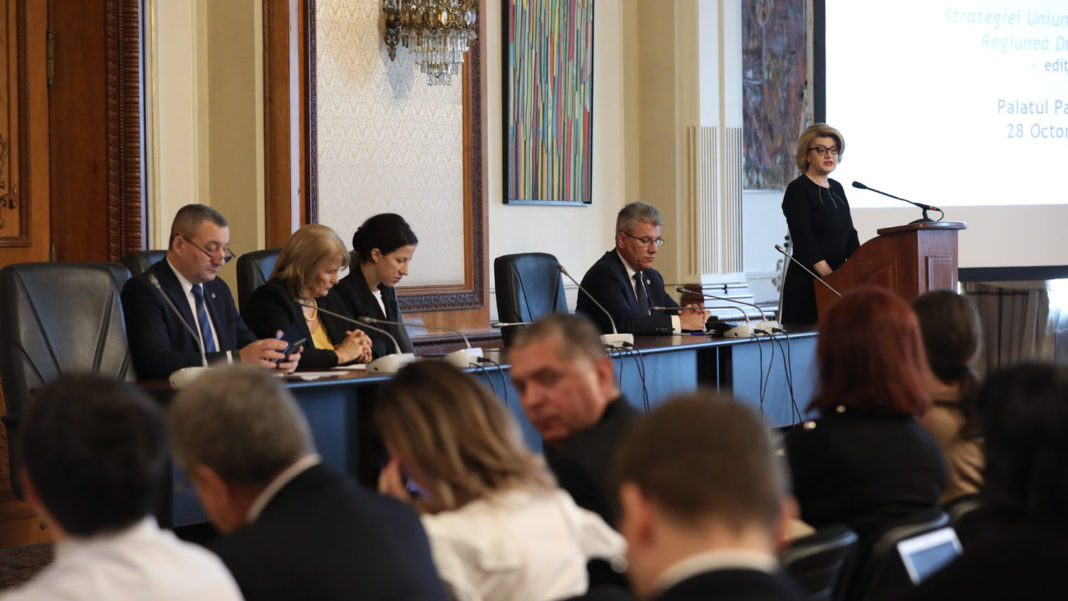 ·      The Romanian Presidency of the EU Strategy for the Danube Region

In addition to keynote inputs and discussions with experts, some best practice projects from the Danube Region were presented and debated, accordingly.

Follow up: the Annual FORUM will stand with the conference as a side event of the Danube strategy, as part of  the EU Strategy for the Danube Region (EUSDR), according to the oficial understandings leveraged with The Office of the Lower Austrian Provincial Government, Department for International and European Affairs in its function as Chair of the Working Community of the Danube Regions. ”

As Presidency of the EUSDR (November 2018-October 2019), Romania is doing its best to reach consensus among the participating countries for ensuring full implementation of the Danube Strategy main objectives. Romanian Presidency proposed the goal to re-launch the Strategy by bringing it higher on the political agendas of EUSDR states and by stimulating further involvement at the technical level.

The ongoing revision process of the EUSDR Action Plan represents a very important step in the direction of the making the Strategy more inclusive, more efficient and better corelated to EU policies. This complex process requires both political and technical inputs from all involved countries and stakeholders. Romania plays its role as facilitator of consensus within the Revision Process of the EUSDR Action Plan.

Throughout its mandate, Romania promotes four priority topics and directions of actions:

Officially launched in 2011, it is one of the four macro-strategies existing at the level of the European Union, being co-initiated by Romania and Austria and representing a mechanism for the cooperation of the Danube basin countries for the economic, social and territorial development of the macro- the Danube region. Fourteen states are participating in the EU Strategy for the Danube Region: nine Member States of the European Union (Austria, Romania, Bulgaria, Czech Republic, Croatia, Germany as Federal State and the Länder of Baden-Württemberg and Bavaria, Slovakia, Slovenia, Hungary) and five non-EU countries (Bosnia-Herzegovina, Montenegro, Serbia, the Republic of Moldova and Ukraine).

Almost 10 years after its initial launching, the EU Strategy for the Danube region entered its first process of reviewing its main structure, objectives, targets, actions and projects. Since in June 2018, the ongoing process of updating the EUSDR Action Plan represents a very important step in the direction of relaunching Danube Strategy and aligning it to the post 2020 EU framework.

The revision of the EUSDR Action Plan is a complex process that requires both a political and a technical involvement of all stakeholders. The Romanian EUSDR Presidency continued the efforts made by Bulgaria during its 2018 mandate as Presidency-in-office of EUSDR,  of launching an inclusive, transparent and comprehensive process of consultations for the Revision of the Action Plan. The Romanian Presidency of EUSDR is committed to work with all EUSDR countries, DG Regio/European Commission and other relevant stakeholders to the benefit of the Danube region and its citizens. Overall, the re-launching of the EUSDR and the Process of Revision of the Action Plan involve a lot of efforts and a strong willingness on part of member states of EUSDR countries.

In preparing the new programming period for cohesion 2020+, the EU Strategy for the Danube Region is revising its Action Plan. All EUSDR actors , including National Coordinators, Priority Coordinators and Steering Groups and Stakeholders from Danube countries, are currently involved in drafting their inputs for the new Action Plan of the EUSDR.

According to the UPDATED TIMELINE FOR THE REVISION OF THE EUSDR ACTION PLAN, endorsed at the meeting of the EUSDR National  Coordinators (14-15 February 2019), the first draft of the  Consolidated Proposal for the new Action Plan should be finished by the end of May 2019, based on the document endorsed through consensus on 15 February 2019 allowing for Structuring the Consolidated considerations of the NCs and PACs regarding the Revision.

As the Strategy is a bottom-up process, beside key-stakeholders, all interested citizens from the Danube Macro Region are being offered the opportunity to bring in their proposals for the new Action Plan. Therefore, on the 4th of April 2019, Danube Strategy Point launched an online consultation that allows to collect inputs from the general public. The persons interested to take part in the Revision Process are invited to send their proposals for new strategic projects and actions as a valuable input for the future Strategy.

Moreover, during the 8th Annual Forum of EUSDR from Bucharest (27-28 of June 2019), the Romanian Presidency of EUSDR provided space for Public Hearings for a broader exchange with stakeholders and civil society on the Revision Process’ working documents.

In order to see the progress made in the revision process during the 2019 mandate as Presidency of EUSDR, one can jointly with PACs and NCs below:

ONLINE CONSULTATION ON THE REVISION OF THE EUSDR ACTION PLAN