Acasă Actualitate Chinese companies are offering drones for export that they claim can stage... 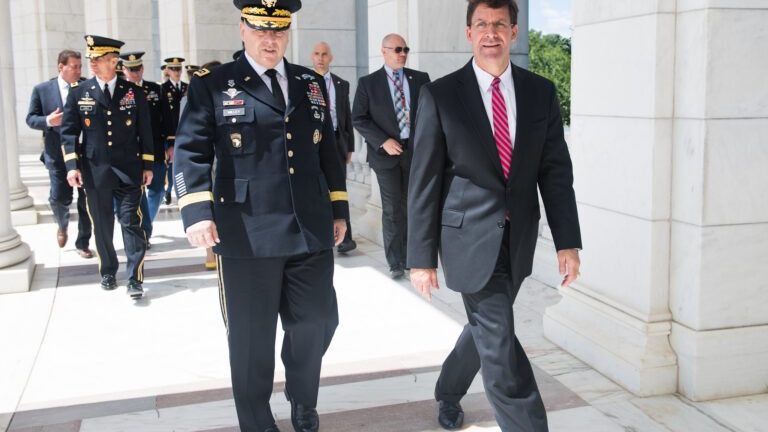 Beijing is using artificial intelligence, not only to repress domestic dissidents and minorities, the Defense Secretary said, but to develop and export autonomous weapons.

WASHINGTON: Chinese companies are offering drones for export that they claim can stage lethal airstrikes autonomously, without the kind of human oversight the US military insists on, Defense Secretary Mark Esper said today.

It’s just one of the many warning bells Esper is ringing with industry and allies about China’s all-out push on advanced technologies like AI and 5G. “Don’t write off what we’re saying as United States scaremongering or [Defense Department] scaremongering about China,” Esper implored today. “Don’t think we’re overstating the problem. There are serious issues out there and we’ve been asleep at the switch here for quite some time.

“China believes it can leapfrog our current technology and go straight to the next generation,” Esper warned a conference hosted by the congressionally-chartered National Security Commission on Artificial Intelligence. “In addition to developing conventional systems for example, Beijing is investing in low-cost long-range, autonomous and unmanned submarines, which it believes can be a cost-effective counter to American naval power.”

In the air, Esper went on, China is offering advanced drones for export. While the secretary didn’t mention it, this is something the US has been very cautious about doing, helping to create the demand that China now seeks to meet.

“As we speak, the Chinese government is already exporting some of the most advanced military aerial drones to the Middle East, as it prepares to export its next-generation stealth UAVs when those come online,” Esper said. “In addition Chinese weapons manufacturers are selling drones advertised as capable of full autonomy including the capability to conduct lethal targeted strikes.”

Now, Esper clearly stressed the word “advertised,” which suggests the secretary is at least somewhat skeptical the Chinese drones are actually as capable as their makers claim. (The senior State Department official in charge of US weapons exports recently offered a damning review of Chinese weapons.) That said, it’s much easier to create an indiscriminate weapon than one that avoids collateral damage. An AI that can detect, for example, a roughly human-sized object with a roughly human-like body temperature is much easier to program than one that can tell a civilian from an armed combatant. And an unmanned system that opens fire on its own, without seeking approval from a human overseer, doesn’t need the kind of secure, jam-proof, long-range communications networks that are required for human oversight.

Esper took some shots at Russia as well. Moscow has used “the latest technologies against democratic nations and the ideals of free and open societies,” he said. (It’s worth noting that President Trump is publicly skeptical of claims Russia hacked the Democratic National Committee or otherwise interfered in US elections. At the same time, the top national security officials from across the administration today issued a pledge to protect the security of voting, noting Russia and China would try to influence the elections). “We shouldn’t doubt their abilities on the battlefield either,” Esper went on.

But Esper reserved most of his rhetorical fire for China, emphasizing it was the No. 1 threat – not just to the US but to its allies and to private companies. “Cooperation with Beijing has consequences, not just for democracy and human rights, but also for the strength of our partnerships abroad,” he said. “If our allies and partners turn to Chinese 5G platforms, for example, it will inject serious risk into our communication and intelligence-sharing capabilities. Our collective security must not be diminished by short and narrow-sighted focus on economic opportunity.”

(He’s referring, among other things, to controversy over whether Britain’s decision to permit some Huawei technology in its 5G networks could compromise its membership in the Five Eyes intelligence-sharing alliance with the US, Australia, Canada, and New Zealand).

Meanwhile, Esper promised, the United States would abide by strict limits on AI. (That said, the US, like most major powers, has opposed a broad international ban on “lethal autonomous weapons systems.”)

“While technology is constantly changing, our commitment to the law, to ethics and to duty does not,” Esper said. “Some in the private sector have raised concerns about working on AI with the United States military. Unlike some parts of the world, American corporations have a choice.”

“Let me be clear: The question is not whether AI will be used by militaries around the world – it will be,” Esper concluded. “The real question is whether we let authoritarian governments dominate AI and by extension the battlefield, or whether industry, the United States military, and our partners can work together to lead the world in responsible AI research and application.” (Sydney J. Freedberg Jr.).

With one icebreaker down, the US has one left in port — with no new...