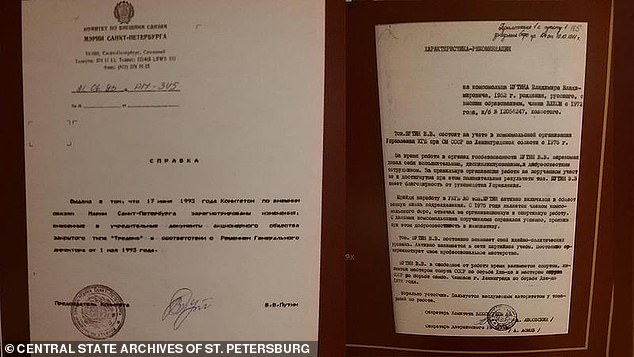 Newly-released files reveal how the Russian leader was praised for being ‘morally stable’ and a ‘conscientious, disciplined employee’ while a young man in the KGB

A KGB profile belonging to Russian President Vladimir Putin has been released to the public at an exhibition of declassified Soviet documents at the central state archive in St. Petersburg.

The six-paragraph profile, published yesterday by Russian news channel 78, remarks on ‘the well-deserved authority he enjoys among colleagues.’

According to Russian state news agency TASS, the exhibition in St Petersburg, is dedicated to ’90 personalities and their accomplishments in politics, military affairs, science, culture and the arts.’

The exhibition also features forms filled out by the Russian president, who was then a member of the All-Union Young Communist League.

Vladimir Putin, 67,  became president of Russia in 2000, having formerly headed the Russian Federation’s FSB, successor to the Soviet KGB.

Putin served in the USSR’s spy agency for 16 years, between 1975 and 1991, after graduating from a Moscow KGB school.

Putin rose to the rank of Lieutenant Colonel before resigning in 1991 to enter politics in Saint Petersburg.

German newspaper Bild found Putin also had a Stasi identity card while working as a KGB agent in Dresden from 1985-1990:

Putin was stationed in the German Democratic Republic (East Germany) in 1985, working in the city of Dresden until 1990, where he lived with his now-divorced wife Lyudmila Putina. Their second child was born there in 1986.

The State Security Service, more commonly known as the Stasi, was East Germany’s official security service and worked closely with the KGB.

The Stasi has been described as one of the most effective and repressive intelligence and secret police agencies ever to have existed.

The exhibition in St Petersburg’s central state archives is entitled ‘Outstanding figures in national history of the 20th and 21st centuries’.

The Russian president has previously credited his past in the KGB for preparing him for the presidency.

As an intelligence agency the KGB was notorious for assassinations and hostile disinformation campaigns, a tradition Putin has continued as president of the Russian Federation.

Last year, the Russian president was accused of approving the botched Novichok assassination attempt on the life of former Russian spy Sergei Skripal and his daughter Yulia in Salisbury.

How Russian spies have died in the UK

It was one of the most audacious acts of the Cold War which could have come straight from the pages of a spy novel.

In 1978, Georgi Markov was jabbed with an umbrella which fired a poison pellet into his leg as he crossed Waterloo Bridge in London while he waited for a bus.

He died three days later – and for almost 40 years, mystery has surrounded the whereabouts of his killer.

Ex-KGB agent Alexander Litvinenko was poisoned in London in 2006, a killing which a judge said was probably approved by President Vladimir Putin.

The defector died after two agents slipped radioactive polonium 210 into his tea pot at a Mayfair hotel in central London.

The 43-year-old had been an officer with the Federal Security Service (FSB), but he fled to Britain where he became a fierce critic of the Kremlin.

He died after an agonising six-day battle in hospital.

Alexander Perepilichnyy, a key witness in a £140million tax fraud investigation, collapsed while jogging outside his £3million mansion in Weybridge, Surrey, in November 2012.

The Russian had ingested gelsemium – a very rare toxic plant found only in China, a coroner heard.

Tests carried out by leading botanist Professor Monique Simmonds of Kew Gardens found a chemical in Mr Perepilichnyy’s stomach that could come only from a variety of gelsemium – a known method of assassination by Chinese and Russian contract killers.

Alexander Perepilichnyy collapsed while jogging outside his £3million mansion in Weybridge, Surrey, in November 2012

A radiation expert who investigated the ‘assassination’ of Alexander Litvinenko was found dead in a mysterious suicide five months after a trip to Russia.

Matthew Puncher, 46, bled to death at his home from multiple stab wounds inflicted by two knives in his home in Drayton, Oxfordshire in May 2016.

A pathologist said he could not ‘exclude’ the possibility that someone else was involved in the death – but concluded the injuries were self-inflicted.

Boris Berezovsky, was found dead in his in Berkshire bathroom with a ligature round his neck in March 2013.

His friends in the secret service say he planned to give Putin evidence of a plot involving oligarchs to topple the strongman in a coup.

Theory has it that the exiled Russian tycoon was slain by Western secret services linked to the plan to overthrow the Kremlin leader.

A coroner recorded an open verdict saying he either took his own life or he was killed and the scene was staged to look self-inflicted.

Bankrupt property tycoon Scot Young was the fifth member of a close circle of friends to die in unusual circumstances.

The 52-year-old suffered fatal injuries after falling from a window on to railings after being hounded over debts by Russian mafia members.

They had previously dangled him out of a window at the Dorchester Hotel, in Park Lane, threatening to drop him next time if he did not pay up, his close friend alleged.

Mr Young, who was once worth an estimated £400m, claimed to have lost his fortune when a vast Russian property deal, known as Project Moscow, collapsed in 2006.

Meanwhile in 2012, German Gorbuntsov survived despite being shot several times with a sub-machine gun on the Isle of Dogs in East London.

The Russian banker allegedly had evidence relevant to the attempted murder of Russian billionaire Alexander Antonov.

Mr Poteyev had overseen the Russian sleeper agents in the US as a deputy head of the ‘S’ department of Russia’s Foreign Intelligence Service.

Crucially, the Osprey is able to haul the F-35’s heavy engines out to the ship,...