Acasă Actualitate Russia is moving forward on a new multi-billion arms deal with a... 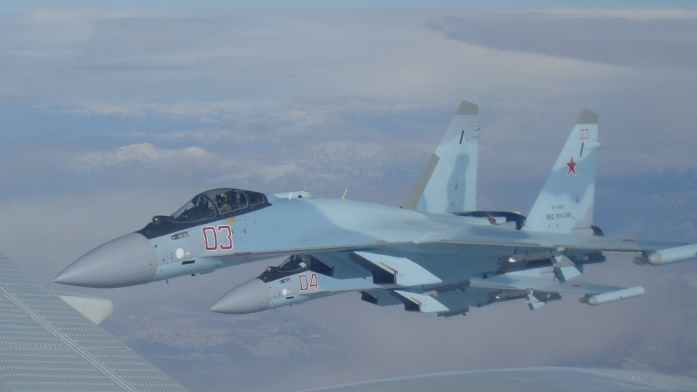 Despite receiving billions in US military assistance, Egypt has inked some big deals with Russia in recent years for aircraft and helicopters. And Moscow says it want to do more.

WASHINGTON: Russia is moving forward on a new multi-billion arms deal with a US partner, marking a new challenge for the Trump administration as it decides whether it’s own sanctions packages are worthy of enforcement.

On Monday, a senior State Department official warned Egypt about the impending delivery of dozens of Russian Su-35 warplanes, a clear signal that Moscow’s inroads with the government of Egyptian President Abdel el-Sisi are paying dividends. The Su-35 deal highlights closer military coordination between Moscow and Cairo, even as Egypt reaps $1.3 billion in security assistance from Washington each year.

The delivery of 20 Su-35 fighter jets “puts them at risk of sanctions and it puts them at risk of loss of future acquisitions,” Assistant Secretary of State for Political-Military Affairs R. Clarke Cooper told reporters at the Dubai Airshow. “Cairo is clearly aware of this,” he added.

In Dubai, Cooper said the Su-35 and other Russian weapons systems would complicate Egypt’s ability to conduct joint operations with the United States and other NATO countries. This is the same losing argument the Trump administration made to Turkey during the windup to its now-completed purchase of the S-400 air defense system, which led to Turkey being kicked out of the F-35 program.

But it’s not clear Cairo cares.

The Egyptians may be heartened by the Trump administration’s refusal so far to slap sanctions on Turkey under the Countering America’s Adversaries Through Sanctions Act (CAATSA) however, which gives the president a menu of sanctions to select from, including cutting off access to loans from financial institutions and denying US visas to foreign government officials.

“The Egyptian leadership views the US threats as not credible, based on a long history of Egyptian/US relations where the US has made threats and even withheld assistance, but in the end has always capitulated,” said Andrew Miller, who was director for Egypt and Israel military issues in the Obama administration’s National Security Council.

Given that history across multiple US administrations, the Sisi government feels comfortable testing Trump on this issue because “they view the relationship as being more to the benefit of the US than to Egypt, and that gives them confidence in taking these risks,” Miller added.

Last week, Secretary of State Mike Pompeo and Defense Secretary Mark Esper sent a letter to the Sisi government warning of possible sanctions over the sale. “Major new arms deals with Russia would – at a minimum – complicate future US defense transactions with and security assistance to Egypt,” the letter, obtained by the Wall Street Journal, said. We asked the State Department and Defense Department for comment about the letter and the possible sanctions. They declined to comment.

Egypt and Russia have been forging their own path as of late, despite Cairo being a long-time customer for US weapons, including Abrams tanks, Apache helicopters and F-15 fighter planes. But Russian Defense Minister Sergei Shoigu visited Cairo last week for the sixth session of the two countries’ joint commission on defense cooperation, where talks focused on regional security and increasing defense cooperation. “The Russian defense ministry is ready to help strengthen the national armed forces and the defense capability of Egypt,” Shoigu said, according to a Russian readout of the meeting.

The $2 billion Su-35 deal, with deliveries scheduled to begin next year, represents just the latest move by the Sisi government in its budding relationship with Moscow, despite President Trump’s public embrace of the Egyptian dictator.

In an odd twist, US and European sanctions against Moscow for its 2015 invasion of Ukraine helped spur the relationship. As part of the penalties slapped on Russia, France cancelled the planned sale of two Mistral helicopter carrier ships to the Russian navy, for which Paris returned about $1 billion that Moscow had already paid for the ships.

Egypt stepped in to buy the two ships — with money borrowed from Saudi Arabia — and quickly reached a deal with Russia to buy the 50 KA-52 helicopters Moscow had already built for the ships. Russian officials said last month that negotiations over the delivery of the helicopters, along with Russian communications equipment, is ongoing.

Egypt turned to Moscow for the Su-35 aircraft after being frustrated in repeated attempts to get a foothold in the F-35 program, a move closely watched in Israel, which remains the only country in the region to receive the fifth-generation aircraft. While the Israeli air force has already used the F-35 in combat in Syria, the country is eagerly awaiting a new test aircraft to be delivered next year, which will allow it to modify the plane with Israeli-made technologies.

The modified F-35 “will enable us to begin the work of upgrading the capabilities of this aircraft so that it answers our special operational requirements ” Lt. Col. S. from the IAF test center said. “All our platforms have been upgraded to enable stretching the flight envelope while using the unique weapon systems made by Israeli industries.”

He added that some of the work revolves around speeding up maintenance issues to “help us to keep the aircraft on the ground for the shortest possible time when we install certain systems,” along with enhancing the aircraft’s capabilities in air-to-air and air-to-ground missions using technologies developed in Israel.

According to Shimon Arad, a senior researcher in the Israeli Institute for National Security Studies, Israel’s aerial superiority has eroded in recent years, due to a combination of improvements in regional air defense systems (Russian S-300 and S-400s) and the acquisition of advanced fighter planes. “For Israel to maintain aerial freedom of action in the next decade, it must have exclusive regional access to fifth-generation fighter planes, such as the F-35.”

States like the United Arab Emirates and Saudi Arabia have expressed interest in the F-35, in part because it would allow them to integrate into US and European operations in the region more easily as NATO buys up more and more of the fifth-generation plane. (Paul McLeary).

Arie Egozi contributed to this piece from Tel Aviv.

The proximal origin of SARS-CoV-2

While the Defense Department IG said the award to Microsoft was fair, it was not...