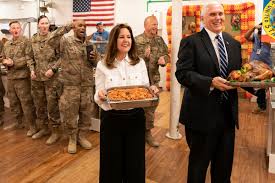 WASHINGTON: In the best American military tradition, one of the signature marks of Thanksgiving is the astonishing logistics of moving tons of turkeys, thousands of yards of yams, cans of cranberries and pallets of pecan pies.

View other videos in the Own the Edge series
How vast is this enterprise? Just Army Central Command is going to feed about 50,000 troops, government civilians, contractors and coalition partners across 19 countries.

Thanksgiving meals for all overseas troops will include:

Here’s one example from an official story about Thanksgiving at: “My mom sent me a pecan pie, as she knows I love it,” said U.S. Army Spc. Roman Smith, a truck mechanic in the 1-252 Armor Regiment, who is on his first deployment supporting Operation Spartan Shield.

Smith, who is married with a three-year-old son, said that he is keeping in touch with family through Facetime and texts and that the pecan pie reminds him of being home in North Carolina.

The first Thanksgiving set the standard of shared support in the face of an uncertain world.

This excerpt is fromThe Desolate Wilderness, an account of the Pilgrim’s:
Being now passed the vast ocean, and a sea of troubles before them in expectations, they had now no friends to welcome them, no inns to entertain or refresh them, no houses, or much less towns, to repair unto to seek for succour; and for the season it was winter, and they that know the winters of the country know them to be sharp and violent, subject to cruel and fierce storms, dangerous to travel to known places, much more to search unknown coasts.

That pretty well describes the challenges many members of the military face each year. It’s one of the reasons senior American civilian and military leaders have made it a point of honor to visit troops at Thanksgiving to provide proof they are remembered on this, the most American holiday.

Minister of Health Zweli Mkhize said on Tuesday the country had significantly fewer infections than...