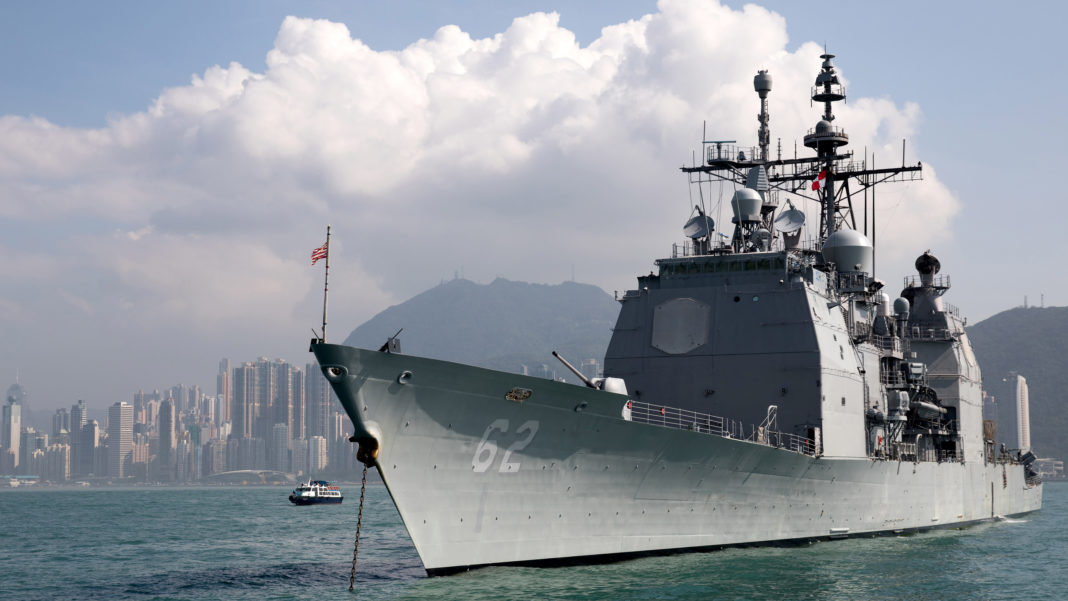 China said Monday, December 2nd, it will suspend U.S. military ship and aircraft visits to Hong Kong and sanction several American pro-democracy and human rights groups in retaliation for the signing into law of legislation supporting anti-government protests in the semi-autonomous territory.

While the nature of the sanctions remained unclear, the move followed Chinese warnings that the U.S. would bear the costs if the Hong Kong Human Rights and Democracy Act was approved.
The steps are “in response to America’s unreasonable behavior,” foreign ministry spokeswoman Hua Chunying said in Beijing, adding that the legislation seriously interfered in China’s internal affairs.
The law, signed last Wednesday by President Donald Trump, mandates sanctions on Chinese and Hong Kong officials who carry out human rights abuses and requires an annual review of the favorable trade status that Washington grants Hong Kong.
The legislation was backed by U.S. lawmakers who are sympathetic to the protesters and have criticized Hong Kong police for cracking down on the pro-democracy movement.
Police say their use of tear gas, rubber bullets and other force is a necessary response to escalating violence by the protesters, who have blocked major roads and thrown gasoline bombs back at officers in riot gear.
Hong Kong has been living with almost nonstop protests for six months. The movement’s demands include democratic elections and an investigation into the police response. More fundamentally, the protesters and others in Hong Kong fear that China is eroding the rights and freedoms they have under a “one country, two systems” framework.

Hua said China would sanction organizations including the National Endowment for Democracy, the National Democratic Institute for International Affairs, Human Rights Watch, the International Republican Institute, Freedom House and others that she said had “performed badly” in the Hong Kong unrest.
“China urges the United States to correct its mistakes and stop any words and deeds that interfere in Hong Kong and China’s internal affairs,” she said, adding that China could take “further necessary actions” depending on how matters develop.
Hua accused the groups of instigating protesters to engage in “radical violent crimes and inciting separatist activities.”

“These organizations deserve to be sanctioned and must pay a price,” Hua said.
China has long accused foreign groups and governments of fomenting the demonstrations in Hong Kong, singling out the U.S., former colonial overlord Britain, and democratic, self-governing Taiwan, which China claims as its own territory to be annexed by force if necessary.
Among the groups to be subject to the unspecified sanctions, the National Endowment for Democracy receives funding directly from Congress, while others generally draw their running costs from a mixture of private and public grants.
Derek Mitchell, the president of the National Democratic Institute, said in Hong Kong last week that accusations it was colluding with protesters were “patently false.”
The institute has no role in the current protests, and “to suggest otherwise spreads misinformation and fails to recognize the movement stems from genuine grievances,” he said.
While China has in the past suspended U.S. military visits, the sanctions on the various groups could bring conditions for civil society in Hong Kong one step closer to those in mainland China.
Beijing imposes restrictions on non-governmental organizations, and is particularly concerned about those involved in humanitarian causes, gender equality, the environment or minority rights.
In Hong Kong, several hundred people who work in advertising started a five-day strike Monday to show support for the anti-government protests. They said they would not go to work, respond to work emails or take part in conference calls.
Some held up signs with protest slogans at an early afternoon rally to launch the strike in Chater Garden, a public square in the central business district.
Antony Yiu, an entrepreneur in advertising and one of the organizers, said they want other business sectors to join them.

“The government seems to be still ignoring the sound of the majority of the people,” he said. The advertising industry wants “to take the first step to encourage other businesses to participate in the strike to give more pressure.”
More than 10,000 people marched on Sunday to try to pressure the government to address the demands after pro-democracy candidates won a landslide victory in district council elections one week earlier.
Hong Kong leader Carrie Lam has said she’ll accelerate dialogue but hasn’t offered any concessions since the elections.
The protests are blamed for driving the economy into recession. Tourism, airline and retail sectors have been hit particularly hard, with retail sales down about 20%.
“The willingness of tourists coming to Hong Kong has been significantly affected,” the city’s financial secretary, Paul Chan, said Monday.
He said the government will run a budget deficit for the first time in 15 years because of falling tax revenues and greater spending to try to offset the economic slowdown.

China reacted furiously Thursday, November 28, 2019, to President Donald Trump’s signing two bills aimed at supporting human rights in Hong Kong, summoning the U.S. ambassador to protest and warning the move would undermine cooperation with Washington.
Hong Kong, a former British colony that was granted semi-autonomy when China took control in 1997, has been rocked by six months of sometimes violent pro-democracy demonstrations.
Thousands of pro-democracy activists crowded a public square in downtown Hong Kong on Thursday night for a “Thanksgiving Day” rally to thank the United States for passing the laws and vowed to “march on” in their fight.
Trump’s approval of the bills was not unexpected. Neither was the reaction from Beijing, given China’s adamant rejections of any commentary on what it considers an internal issue.
Nevertheless, the clash comes at a sensitive time and could upset already thorny trade negotiations between the two nations.
Chinese Vice Foreign Minister Le Yucheng told U.S. Ambassador Terry Branstad that the move constituted “serious interference in China’s internal affairs and a serious violation of international law,” a foreign ministry statement said.
Le called it a “nakedly hegemonic act.” He urged the U.S. not to implement the bills to prevent greater damage to U.S.-China relations, the ministry said.
In a statement about the meeting, the U.S. Embassy in Beijing said, “the Chinese Communist Party must honor its promises to the Hong Kong people.”
The U.S. “believes that Hong Kong’s autonomy, its adherence to the rule of law, and its commitment to protecting civil liberties are key to preserving its special status under U.S. law,” it said.
The U.S. laws, which passed both chambers of Congress almost unanimously, mandate sanctions on Chinese and Hong Kong officials who carry out human rights abuses in Hong Kong, require an annual review of Hong Kong’s favorable trade status and prohibit the export to Hong Kong police of certain nonlethal munitions.
“I signed these bills out of respect for President Xi, China, and the people of Hong Kong,” Trump said in a statement. “They are being enacted in the hope that leaders and representatives of China and Hong Kong will be able to amicably settle their differences leading to long term peace and prosperity for all.”
Prominent Hong Kong activist Joshua Wong, who was among those who lobbied for the U.S. laws, said it was remarkable that human rights had triumphed over the U.S.-China trade talks. Wong told Thursday’s rally that the next aim is to expand global support by getting Britain and other Western nations to follow suit.
Since the Hong Kong protests began in June, Beijing has responded to expressions of support for the demonstrators from the U.S. and other countries by accusing them of orchestrating the unrest to contain China’s development. The central government has blamed foreign “black hands” bent on destroying the city.
C.Y. Leung, a former chief executive of Hong Kong, said at a talk at the Foreign Correspondents Club of Hong Kong that he doubts the U.S. or supporters of the bills “ever had the interest of Hong Kong in mind.”
He suggested Hong Kong was being used as a “proxy” for China and the legislation was a way to hit back at Beijing.
While China has repeatedly threatened unspecified “countermeasures,” it’s unclear exactly how it will respond. Speaking on Fox News, Trump called the protests a “complicating factor” in trade negotiations with Beijing.
At a daily briefing, Chinese Foreign Ministry spokesman Geng Shuang responded to a question about how Trump’s endorsement of the legislation might affect the trade talks by saying it would undermine “cooperation in important areas.”
Asked Thursday if the U.S. legislation would affect trade talks with Washington, a Chinese Commerce Ministry spokesman said he had no new information to share.
Recently both sides expressed confidence they were making headway on a preliminary agreement to avert a further escalation in a tariff war that has hammered manufacturers in both nations.
On December 1st A huge crowd took to the streets of Hong Kong on Sunday, some driven back by tear gas, to demand more democracy and an investigation into the use of force to crack down on the six-month-long anti-government demonstrations.
Thousands turned out, from hardened youthful protesters in black outfits and face masks to parents with their children.
Marching near the waterfront on the Kowloon side of Victoria Harbour, they sought to keep the pressure on city leader Carrie Lam after pro-democracy candidates won district council elections a week earlier.
“If we don’t walk out, the government will say it’s just a youth issue, but this is a Hong Kong problem that affects all of us,” Lily Chau said as she pushed her toddler in a stroller. “If we are scared, the government will continue to trample on our rights.”
Many held up a hand to indicate the five demands of the movement and shouted “Five demands, not one less” and “Disband the police force.”
Police in riot gear were out in force for the third march of the day — and the one where violence seemed most likely. They fired pepper spray and tear gas in some areas. Protesters dug up paving stones and threw them in the street to try to slow the police down. (Frone Adrian).