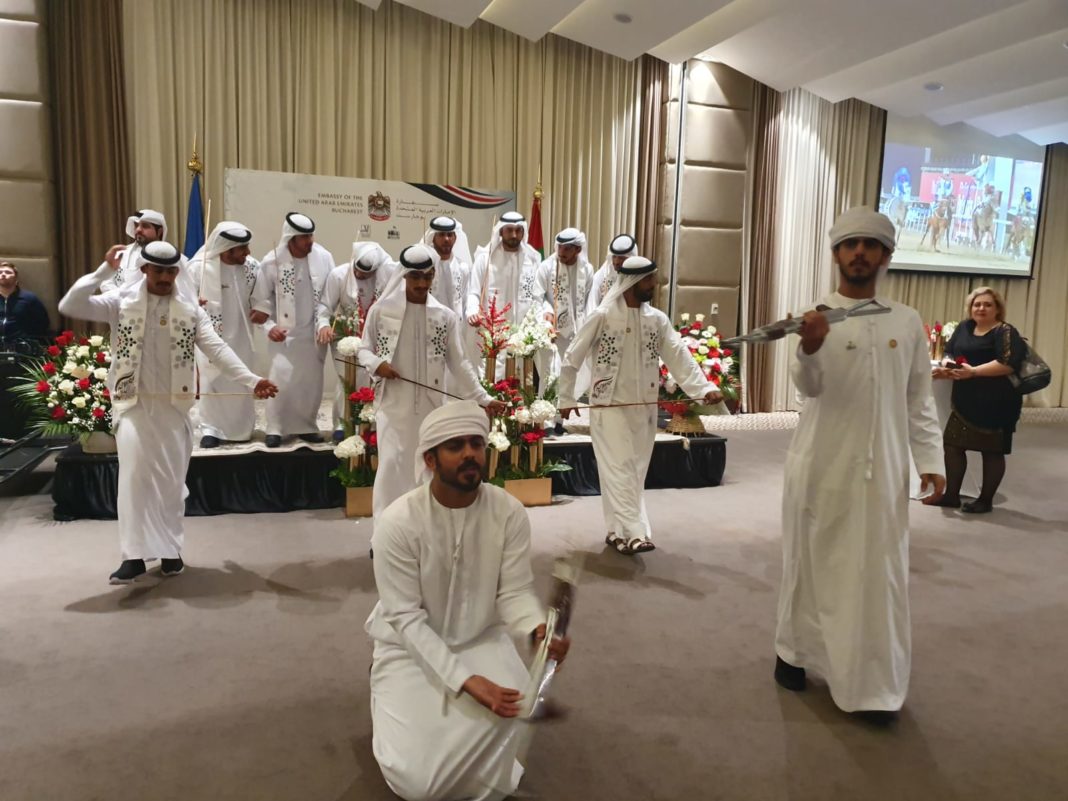 We cherish the friendship and collaboration between the mentioned countries, Romania and the UAE, and we would be looking forward to the Expo 2020 Dubai’s Overseas co-operation results, as Burj Khalifa in Dubai and the Times Square in New York City the USA were dressed up in the Romanian flag, with the occasion of the National Day of Romania.

Happy National day for both the UAE and Romania!

The UAE celebrated the 48th anniversary of the union of the seven emirates. This occasion marks a sincere reflection of the federation’s journey over 48 outstanding years of monumental events and achievements, building on the foundation that was first laid down by the late Sheikh Zayed bin Sultan Al Nahyan and his brothers, the fellow founding fathers. Since then, His Highness Sheikh Khalifa bin Zayed Al Nahyan, President of the UAE, has followed in their footsteps, leading our nation on a journey of continuous progress and prosperity at all levels.

This national occasion is an opportunity to celebrate the UAE’s achievements over the past years. Following the directives of His Highness Sheikh Khalifa bin Zayed Al Nahyan, President of the UAE, and under the leadership of His Highness Sheikh Mohammed bin Rashid Al Maktoum, Vice President and Prime Minister of the UAE and Ruler of Dubai, and the supervision of His Highness Sheikh Mohammed bin Zayed Al Nahyan, Crown Prince of Abu Dhabi and Deputy Supreme Commander of the UAE Armed Forces, the UAE government has keenly invested in developing its people and national capacities, ensuring great progress towards making the UAE one of the best countries in the world by the time of the union’s golden jubilee, as planned in the UAE Vision 2021.

The UAE has planned strategically. Through foresight to anticipate and analyze future opportunities and challenges in vital fields, and execute long-term pre-emptive plans to achieve national goals, using modern technologies, and harnessing them to serve the country’s people and ensure their happiness. It has focused on development in all sectors, transforming plans into tangible realities through record achievements on both regional and international levels, setting the UAE among the world’s most advanced countries. These achievements are in line with the aspirations of the wise leadership for the future of the UAE, to reach the objectives of the UAE Centennial 2071 launched by His Highness Sheikh Mohammed bin Rashid Al Maktoum, a comprehensive, long-term vision spanning over five decades, to enhance the UAE’s reputation and soft power.

For the sixth consecutive year, the UAE maintained its position as one of the largest international donors in the field of official development aid (ODA) in relation to its gross national income (GNI), after ranking first in 2013, 2014, 2016 and 2017. UAE foreign assistance during the last 10 years (2009-2018) amounted to approximately AED 170 billion (USD 46 billion).

The UAE has continued to exert tremendous humanitarian efforts to achieve peace and prosperity in the world through its foreign aid, development and humanitarian programs. The UAE has maintained its position among the largest international donors in terms of official development aid, which, relative to the UAE’s gross national income, amounts to 1.31%, almost twice the target of 0.7% set by the United Nations as a global measure of donor efforts.
The UAE seeks to make a tangible positive impact to the ultimate goal of humanity:  that of eradicating poverty and achieving sustainable development by 2030. The country is at the forefront of efforts to combat poverty and provide foreign aid to those in need, especially those most vulnerable. The UAE’s projects in developing countries have diversified to include the sectors of infrastructure, education, health, energy, food aid, agriculture and the environment.
The UAE has thus emerged as one of the world’s leading advocates of alternative and renewable energy solutions worldwide. Seeking to help address the consequences of climate change, the UAE contributes to the development of the renewable energy sector in island countries such as the Caribbean and Pacific Islands, and has established two funds to provide solutions and support renewable energy programs in island states. Over the past 10 years, the UAE’s total assistance to the renewable energy sector reached about USD 1.25 billion. The UAE’s assistance to the renewable energy sector remains one of the driving forces for the economy, promoting job growth and empowering women, contributing to the achievement of sustainable development goals and environmental benefits.

These significant achievements reflect the UAE’s civilization and culture and the respect and appreciation it has drawn both regionally and globally, under the guidance of  wise policymakers and leaders who have worked tirelessly to ensure the UAE enjoys a prestigious regional and international stature. The UAE has proven a model of wisdom, moderation, coexistence and peace, and renowned for its achievements and excellence.
Through his vision, the late Sheikh Zayed bin Sultan Al Nahyan – may his soul rest in peace – guided the UAE towards the adoption of a successful and active foreign policy based on balance, moderation, and non-interference in internal affairs of other countries, in acknowledgement of the role and responsibility the UAE holds at regional and international levels.
The UAE emerged as an inspiring model of tolerance, coexistence and human fraternity, working over the years to lead international efforts towards closer relations between cultures, religions and civilizations, building bridges that contribute to the progress of nations and enhance security and stability.
These values of tolerance and fraternity were highlighted this year in the UAE capital of Abu Dhabi, which witnessed the birth of the Document on Human Fraternity, signed jointly by Pope Francis of the Catholic Church and Sheikh Ahmed El-Tayeb, Grand Imam of Al-Azhar. This historic statement is a unique model among calls for reconciliation and peace, dialogue and closer ties between nations, cultures and civilizations. The document aims to establish new experiences between nations and cultures, characterized by friendship and fraternity and aiming to strengthen human relations, build bridges of communication, ensure harmony and goodwill, and fight extremism, violence and terrorism.
The announcement of the Abu Dhabi document coincided with the declaration of 2019 as the Year of Tolerance by His Highness Sheikh Khalifa bin Zayed Al Nahyan, President of the UAE. This stressed the importance of tolerance in terms of sustainable institutional work through a set of legislations and policies aimed at deepening the values of tolerance, dialogue, acceptance and openness to different cultures, especially among new generations, which positive repercussions reflect on society in general.
Combined with several initiatives and large-scale projects within the same framework, the Declaration aimed to position the UAE as a global capital of tolerance. They feature research contributions and social and cultural research in the field of tolerance and dialogue of cultures and civilizations, and the introduction of legislation and policies aimed at institutionalizing the values of cultural, religious and social tolerance, and finally to promote dialogue, tolerance and acceptance of the other. Initiatives launched to promote dialogue between peoples and religions include the “National Programme for Tolerance”, the “Mohammed Bin Rashid Award for Tolerance” and the “International Institute for Tolerance” in addition to the establishment of several centers to fight extremism.
In terms of women’s empowerment, the UAE has continued its efforts to raise the status of Emirati women in line with the Resolution No. (1) of 2019 issued by the President, His Highness Sheikh Khalifa bin Zayed Al Nahyan, to increase the representation of women in the Federal National Council (FNC) to 50%. The decision was issued in the run-up to the FNC elections scheduled to take place in October.
The UAE now leads in several regional and global indicators on gender equality and women’s achievements, education and literacy, and female employment, and also ranks first in the world for “treating women with respect” according to the Social Progress Index, among many other indicators. In addition, women contribute to the ownership of nearly half of the SMEs in the UAE, and the government’s socio-political policies stress the need for a more equitable approach to the development of the family.
The UAE supports the participation of Emirati women in decision-making as a core component of their economic empowerment. Federal laws now require the appointment of women to the boards of all government institutions. Women represent 50% of the FNC and 27% of the new cabinet composition, with 8 female ministers.
Moreover, the UAE has made remarkable progress in reducing the gender gap in girls’ education in schools and higher education, with women comprising more than 70% of UAE university graduates. Economically, women make up 46.6% of the total workforce, holding 66% of public sector jobs, 30% of which are decision-making positions. Furthermore, there are 23,000 businesswomen managing projects worth about US$15 billion in the UAE.
In the field of foreign investment and talent attraction, the UAE Cabinet approved a resolution granting foreign investors ownership of up to 100% in 13 different economic sectors. A new system of visas introduced provides investors and their families with long-term visas of up to 10 years. In addition, residence visas of up to 10 years have also been granted for specialized competencies in the fields of medicine, science, research and technology, as well as for scientists and innovators.
The UAE is proud to host Expo 2020 Dubai, the world’s first event to highlight the creativity and achievements of humankind. It will welcome more than 200 participants from countries, companies, organizations and educational institutions, highlighting the country’s ability to gather the world under one roof.
Expo 2020 Dubai will contribute to the growth of the UAE economy, injecting AED 122.6 billion (USD 33.4 billion) between 2013 and 2031. During the 2020-2021 event, Expo 2020 Dubai will contribute 1.5% of the country’s GDP.
UAE diplomacy will continue its journey and set the UAE at the forefront, to serve as an example of success and excellence, as a source of success and distinction over the coming years. (Catalin Dinca)

United States Defense Secretary Mike Esper said that the US military is preparing a response...

BUILDING COHESION FOR A SHARED PROSPERITY IN A DANUBE REGION