Acasă Actualitate NATO’s aging eye in the sky to get a last overhaul NATO... 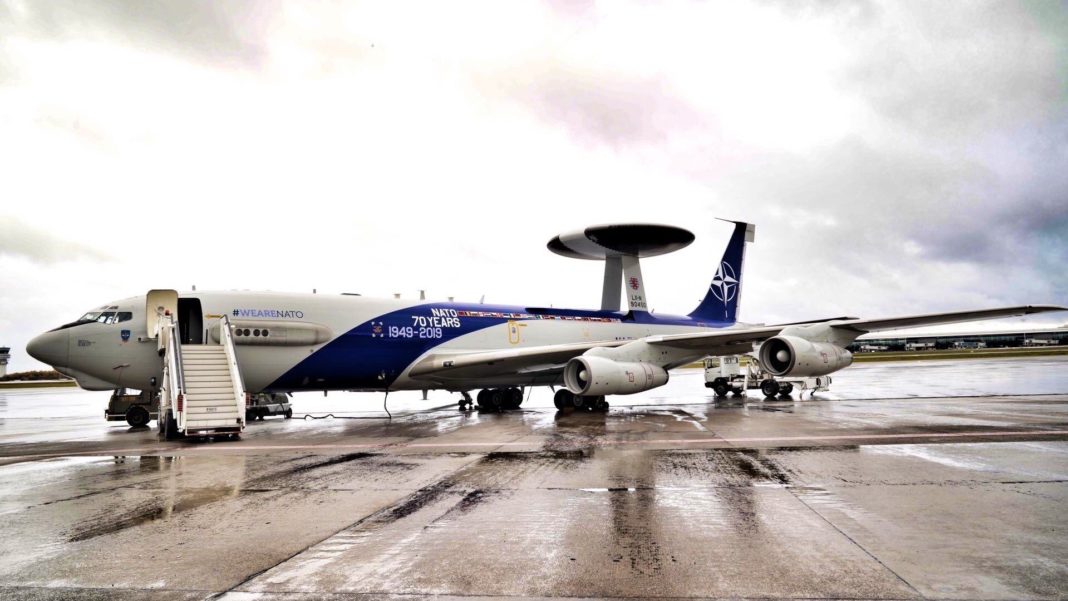 NATO and U.S. aircraft-maker Boeing agreed Wednesday a $1 billion contract to refurbish the military alliance’s aging fleet of surveillance planes, ensuring that they can continue to serve as the organization’s eye in the sky until 2035.

The agreement, which was not actually signed Wednesday, was made public just days before U.S. President Donald Trump joins his NATO counterparts in London for a Dec. 4 summit marking the 70th anniversary of the world’s biggest security alliance.
Trump is expected to make fresh demands on his European and Canadian partners to significantly step up defense spending. Critics say he is intent on drumming up business for the U.S. defense industry.

NATO’s contract announcement provides a timely reminder that money is going to Boeing, although other European contractors will be involved in the refurbishment, which is expected to be completed by 2027.
Purchased in 1977 at the height of the Cold War, when Jimmy Carter became U.S. president and as a missile crisis with the then Soviet Union was beginning to fester in Europe, the 14 Boeing E-3 planes cost almost $8 billion.
“The modernization will ensure NATO remains at the leading edge of technology,” NATO Secretary-General Jens Stoltenberg told reporters at a military airport outside Brussels, not far from the alliance’s new billion-dollar headquarters.

He said the upgrade will provide the Airborne Warning and Control planes, known as AWACS, “with sophisticated new communications and networking capabilities so these aircraft can continue their vital mission and contribute to our security.”
The planes were deployed in U.S. skies after the September 11, 2001 attacks on New York and Washington to help protect cities and nuclear power plants. They were used during the Russia-Ukraine crisis, to assist Turkey during the war in Syria and to help the coalition fighting the Islamic State group.
Beyond their role as NATO’s eye in the sky, the planes can be used for air-policing, support in counter-terrorism or evacuation operations, and provide help during natural disasters. They can stay aloft for 8 hours at a time and watch over an area of more than 120,000 square miles.
Developed years before the internet and mobile telephones were in common use, they seem almost quaint in an age where a pilotless drone has flown for 40 consecutive hours, and stealth technologies wreak havoc with many modern surveillance systems.
But the maintenance program will see their computer hardware and software upgraded to turn around double the intelligence information, data and imagery that they currently handle, whether it be of air, ground, sea or space origin.
The surveillance aircraft, which are based in Germany, are among the few military assets that NATO owns as an alliance. Member nations own all the other equipment. A new drone program has also been set afoot, with the first of five Global Hawks delivered to a base in Italy last week.

NATO experts have warned for years that this plane-based surveillance platform will not work after 2035. They have urged the alliance’s 29 member nations to quickly decide how to replace the fleet by then; given the roughly 20-year time gap required to develop new surveillance technologies.
A decision on what will come next – probably an integrated network of equipment like, say, a combination of drones, satellites, planes – is expected in 2022. (Irina Ianculescu)

A new policy orders organizations across the Army to embrace advanced manufacturing to “fundamentally change”...

Of 20 commercial startups the Techstars Air Force Accelerator has helped, 19 have gone on...