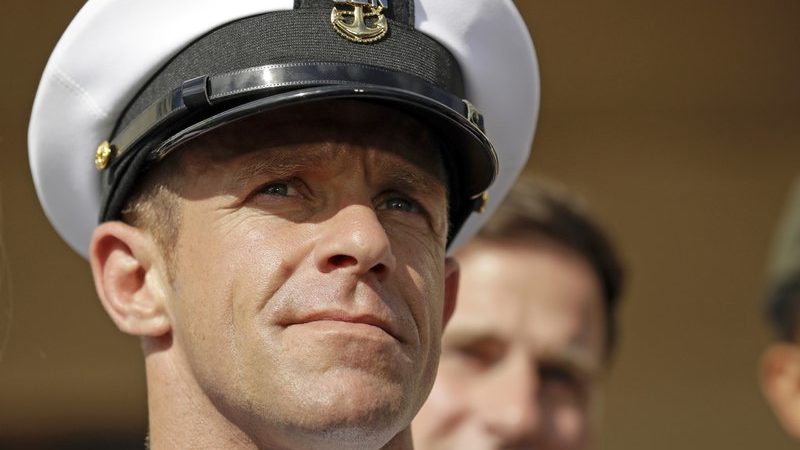 Misunderstandings about the pardon power may also fuel speculation that its exercise is inherently damaging to the long-term interests of the military justice system. Actually, pardons and clemencies are not rogue, extra-legal actions, but rather are integral to the Constitution’s vision of criminal justice writ large.

Edward Gallagher
There’s been an enormous amount of debate about whether President Trump should have intervened in several military justice cases, offering pardons to convicted troops. In May, Trump pardoned Michael Behenna, a lieutenant convicted of murdering an Iraqi believed to be working with al Qaeda. A few weeks ago, the president restored Chief Petty Officer and Navy SEAL Edward Gallagher’s rank and allowed him to remain a member of SEAL community after he was convicted of posing with a corpse after being acquitted of murder charges and threatening fellow SEALs with death if they reported his actions. The president also pardoned Clint Lorance, a former Army lieutenant, who was serving a 19-year sentence for the murder of two civilians, and Maj. Mathew L. Golsteyn, an Army officer who faced murder charges for killing an Afghan he thought was a bomb maker. Charles Dunlap is one of the most experienced military lawyers around and now heads Duke University’s Center on Law, Ethics and National Security and I asked him if the president was right to pardon those men and whether it was likely to have any long-term impact on America’s relations with allies and enemies, as well as on the ranks of those who service. His answers? Read on! The Editor.
President Trump’s recent interventions in military justice cases has drawn howls of protest from some pundits who intone about irreparable harm to the military justice system, damage to relations with allies, and injury to civil-military relations. I personally disagree with most of Trump’s decisions but, from the perspective of someone who served more than three decades as a military lawyer, almost none of those effects are likely.
Why? First, none of the cases invovled servicemembers accused or convicted of “war crimes.” It is not unusual for military prosecutors to avoid charging people with war crimes these days because, if they do, they must prove the existence of a conflict lawfully characterized as a “war.” Avoiding war crimes also can help sidestep complications occasioned by the ‘combatant’s privilege.’ That legal privilege essentially relieves soldiers of criminal responsibility for killing the enemy in wartime under otherwise lawful circumstances.

To seamlessly share data on everything from target coordinates to engine diagnostics, the Army is...