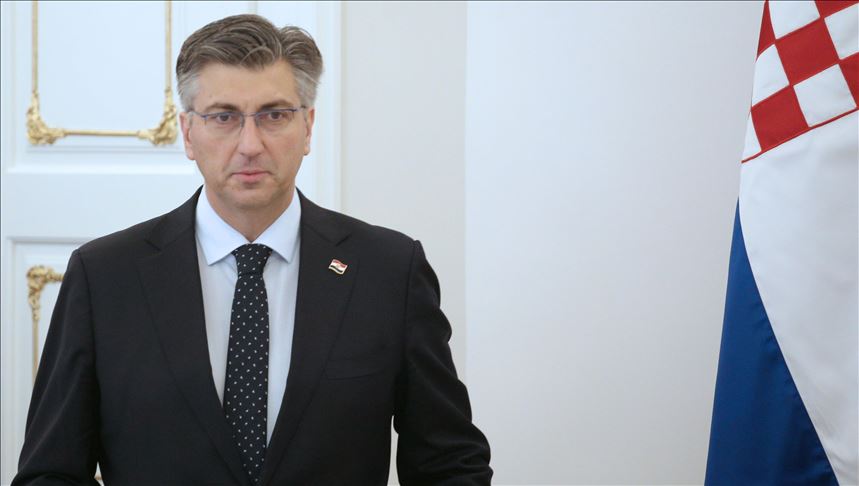 The priorities of Croatia’s presidency are driven by its motto: “A strong Europe in a world of challenges”.
This is Croatia’s first presidency of the Council since it joined the EU in 2013.
From 1 January to 30 June 2020, Croatia will take over the Presidency of the Council of the European Union for the rst time. During this six-month period, Croatia will lead the activities of the Council as an honest broker, building cooperation and agreement among Member States in a spirit of consensus and mutual respect. The Croatian Presidency comes at a time of great changes for the European Union, at the beginning of a new institutional and legislative cycle following the new composition of the European institutions, as well as at a time of challenges resulting from the process of the United Kingdom’s withdrawal from the European Union. Uneven economic development, climate change, increased migration, dissemination of disinformation and growing populism are some of the challenges of today’s world to which citizens are expecting answers, and with good reason. Those answers can be given only by a strong Europe. Here, our unity is our greatest strength. In order to bring the Union and the benets it provides even closer to its citizens, we will aim to enhance dialogue, including through the Conference on the Future of Europe. Based on Croatian national priorities, in line with the guidelines set by the EU Strategic Agenda 2019-2024 and drawing on the Trio programme, Croatia has prepared a detailed six-month Presidency programme built around four pillars:
These four priorities are united in the motto ‘A Strong Europe in a World of Challenges’, which encapsulates the vision of a Europe acting for the benet of its Member States and citizens. In its work, the Croatian Presidency will also take into account the strategic documents that will be agreed between the EU institutions and the work programme of the new European Commission for 2020. An ambitious, balanced and sustainable EU Multiannual Financial Framework for 2021-2027 is a prerequisite for achieving our goals. The Croatian Presidency will work towards achieving a comprehensive agreement in order to enable the timely implementation of all the Union’s policies and programmes, and to further build a Europe that is as strong as possible in an ever-changing and challenging world.

A Europe that develops
In the era of the digital revolution, the European Union, its economy and labour market face new global challenges and demographic changes. In such circumstances, further deepening of the single market, encouraging the digitalisation agenda, investment in research and innovation, greater accessibility of high-quality and lifelong learning and developing new skills adjusted to jobs of the future are guarantees for the Union’s competitiveness. Improving the quality of life of the Union’s citizens requires further development of policies that will create better working and living conditions, and contribute to protection of the environment and the ght against climate change. The Croatian Presidency will therefore support a balanced, sustainable and inclusive development of the Union that takes into consideration the specicities and needs of all Member States, their regions and citizens.
A Europe that connects
In a world that is becoming increasingly connected, the progress of the European Union depends on it having a networked economy and making full use of its infrastructural and human potential. The existing dierences within the European Union in terms of the quality of infrastructure and the availability of transport, energy, telecommunications and digital networks hamper its development and global competitiveness. In order to achieve full social, economic and territorial cohesion, transport, energy and digital infrastructure and interconnection need to be further developed. The Croatian Presidency will encourage policies which strengthen the infrastructural connectivity of the Union and bring together its citizens, primarily through education, culture and sport.
A Europe that protects
The European Union considers the security of its citizens to be an issue of of utmost importance. Hence, the Croatian Presidency will work on strengthening internal security, providing more eective control of external borders, ensuring full interoperability of IT systems, and strengthening resilience to external threats, as well as hybrid and cyber threats. Our common goal remains to nd a comprehensive solution for a sustainable and eective migration and asylum policy. The Croatian Presidency will focus on further establishing the Union as an area of freedom, security and justice, founded on common values, democracy and the rule of law.
An influential Europe
Member States can best overcome the challenges of the 21st century by facing them through the framework and strength of the European Union. Further development of capacities and instruments for common action is the only way to strengthen the Union’s leading role on a global scale. Promoting European values and interests, strengthening multilateralism and European security and defence cooperation, and implementing the United Nations 2030 Agenda for Sustainable Development goals remain the main points of reference for the Union’s external action. Its credibility in international relations is also reected in its responsible approach, especially towards its own neighbourhood, from East to South, including South East Europe (Western Balkans) in its immediate surroundings. The Croatian Presidency will strive for the continuation of a credible and eective enlargement policy, as an investment in stability and security as well as further economic development and connectivity on the European continent.
Priorities of the Croatian Presidency
Multiannual Financial Framework Enlargement policy Conference on the Future of Europe Brexit PRIORITIES BY COUNCIL CONFIGURATIONS European Union Croatian Presidency of the Council of the European Union General Aairs Council (GAC)
Multiannual Financial Framework
The Croatian Presidency is dedicated to achieving an ambitious, balanced and sustainable agreement on the new Multiannual Financial Framework (MFF) in order to contribute to laying the foundations for nancing EU priorities in the 2021-2027 period. In this respect, the Presidency will further build on the achievements of the previous presidencies and cooperate closely with the President of the European Council. To this end, the Croatian Presidency will strive to nd a balance between continuing to nance Treaty-based policies that already provide a clear European added value, such as cohesion and common agricultural policies, and reaching an agreement on nancing policies aimed at new challenges. It will work towards reaching an agreement in a spirit of partnership and for the benet of the European project, as well as all EU Member States. The Croatian Presidency will be guided by the principle that long-term planning should take into account budgetary discipline, improved implementation and stability of investment, and ensure the smooth nancing of EU development priorities, as well as the timely start of the implementation of new programmes as of 1 January 2021.
The Croatian Presidency will direct its efforts towards adopting both general and sectoral legislative proposals covered by the MFF that will contribute to the overall development of the European Union and all its Member States in all areas, improving the quality of life and advancing the interests of all of its citizens.

Cohesion policy
The cohesion policy is crucial for reducing economic, social and territorial dierences, and for strengthening the competitiveness of the EU and all its regions. Cohesion contributes to the creation of new jobs, investment and economic growth and to the smooth and ecient functioning of the single market. At the same time, it directly aects the quality of life of EU citizens and helps them face new challenges, such as demographic changes, industrial transition and climate change. The Croatian Presidency will contribute to nalising the negotiations on the legislative package for the Cohesion Policy 2021-2027. Rules enabling eective implementation of projects will play an important role in further implementation of the cohesion policy. The Presidency will contribute to strengthening the visibility and added value of the cohesion policy by organising a number of formal and informal events. In order to reduce disparities between EU Member States, Croatia will also continue to work on strengthening convergence and connectivity through the Three Seas Initiative. (Dumitru Sorin).

The Russian Nuclear Submarine spotted in the International Mediterranean, and in the Israeli waters, especially