INCISIV National
Acasă Actualitate This is only the second time reporters from non-local... 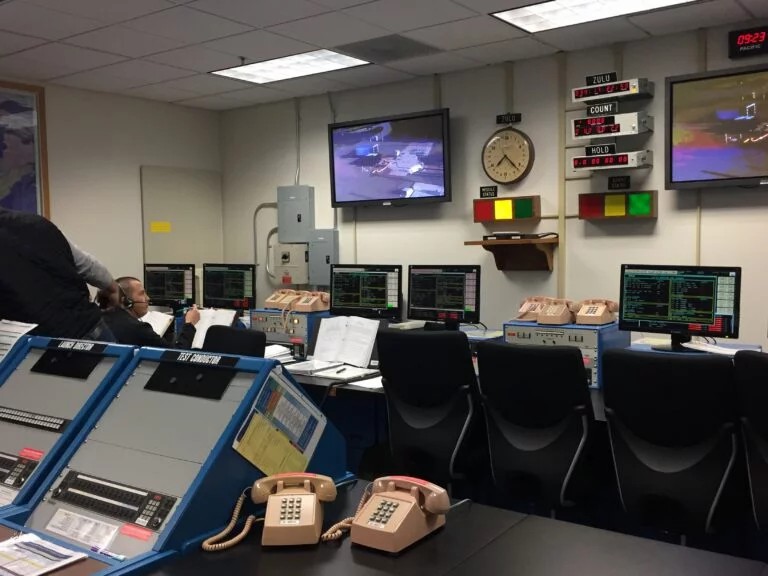 Theresa and a small group of reporters will be allowed to watch tomorrow night’s launch.

The testing operations center for Minuteman III ICBM test launches at Vandenberg AFB in California.
VANDENBERG AFB: The team from the Air Force 576 Flight Test Squadron monitoring tomorrow night’s test launch of a Minuteman III ICBM will be using pale pink ‘touch-tone’ telephone handsets — first introduced in 1963 — to communicate with each other and their counterparts at the launch site itself.
The age of the equipment, especially anything IT related, is one of the first things that strikes you when touring the facilities used in the months-long testing process for the ICBM arsenal. While the command centers for both the test site here and the three operational Minuteman III bases — F.E. Warren AFB, Wyoming; Malmstrom AFB, Montana; and Minot AFB, North Dakota — no longer use the larger-sized black floppy disks (8 inch and 5.25 inch), some systems still rely on the 3.5 inch ones first introduced in 1986, 1st Lt. Mitch Nairn, task force combat crew commander at Malmstrom said.
So, it is no wonder that “sustainment” of the 400 active missiles in the US ICBM arsenal is the key concern for leaders at Air Force Global Strike Command (AFGSC), who run both the land-based and the air-launched legs of the nuclear triad. Those missiles, built by Boeing, date to the late-1970s and early 1980s, though they’ve been upgraded.
“It gets harder as the weapon system ages. We have issues from parts obsolescence, to obtaining replacement parts,” Col. Omar Colbert, commander of the 190-person 576th, told reporters here. “Actually, some of the manufacturers that were around originally are no longer building those parts.”
So, all things considered, it is a bit of a wonder that daily maintenance and testing them four or five times a year to keep them working doesn’t cost more than it does.
“Operating the current weapon system, I think we’re tracking about $1.5 billion annually — to do all that we do with those weapon systems,” Colbert said. “That is for actually operating the weapon systems. For the five different mission sets that we do here, we actually have a very reasonable budget: roughly $11 million.”
Those first three mission sets include pre-launch testing of software and electronics, and operational test launch itself. They “paint a picture of our readiness, our accuracy of our weapon system and the reliability of the weapon system to function as designed,” he said. The fourth mission for the squadron is “future programs” — anything for upgrading/sustaining the current Minuteman fleet, or for its replacement, the Ground-Based Strategic Deterrent (GBSD).
Tomorrow night’s test launch, dubbed FTU-2, is one of those launches primarily aimed at testing development — a new chemically explosive fuze to set off the Minuteman’s W-87 nuclear warhead. The current fuze is already three times older than its originally planned life span, Colbert said.
Tomorrow’s test launch with the new fuze is the second of four planned; the first was held last February, said Jack Yeates, the test manager for the Mk-21 fuze program. The third is planned for 2022, and the final one in 2024 when the Air Force hopes to declare it operational. Then the new fuze will be back-fitted on the Minuteman fleet, he said, as well as on the future GBSD, being built by Northrop Grumman.
According to DoD’s 2019 Selected Acquisition Report for the ICBM fuze modernization program, it is expected to cost $2 billion to complete.
The fifth mission set performed by the test squadron here is tactics development and evaluation, Colbert said.
As Breaking D readers know, the GBSD program has been somewhat troubled — with the July 2019 withdrawal from the $85 billion competition by Boeing throwing the acquisition effort into a bit of a tizzy due to concerns about Northrop Grumman being left as the only player standing. Nonetheless, Congress fully funded the GBSD at $557 million in the 2020 defense spending bill. And Air Force officials say the program is on track for its planned 2029 initial operating capability.
“We’re really excited about where we’re going in regards to GBSD. I think the program is doing extremely well,” Lt. Gen. Anthony Cotton, AFGSC deputy commander, told reporters here today in a conference call. “I think we’re seeing that the timelines for emplacement haven’t changed.” (By THERESA HITCHENS).

CISA, bucking the usual, has started a list of cybersecurity “bad practices” in hopes of...

The Ransomware Task Force report, a comprehensive effort on this topic, includes 48 recommendations to...