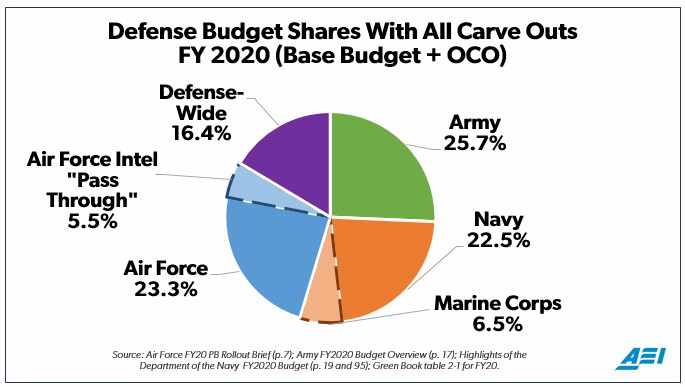 This year’s battle of the budget between the services has been much more public than any in recent memory, as Breaking D readers know. Mackenzie Eaglen, who writes for us regularly on Congress and the budget, does a deep dive and presents the results of which service really wins in the budget — and why — in clear charts so even the simplest budget aficionado can understand her points. We expect the 2021 budget to be unveiled at the Pentagon on Feb. 10 and we’ll see how last year’s budget deal shapes the final decisions. Read on! The Editor.
A myth persists inside the Pentagon that the three military services each receive a third of the defense pie. This is not true. In theory, each service should have an equal voice–but none have “equal” funding.
Unfortunately, fake news has real consequences. An unusual public spat broke out last month between the Navy and the Army about the 2021 budget. The Air Force has remained publicly silent, but its friends have spoken. Emotions are running high; a sign about how tight money actually is at the Pentagon as the three-year “Trump Bump” for defense comes to an end.
Service leaders know the 2021 dollars are high but they’re not quite high enough to fully invest in the National Defense Strategy’s top priority — competition with China. This is so even though the Secretary of Defense’s cut-drill in the defense-wide accounts known as the “fourth estate” found nearly $6 billion to supposedly reinvest elsewhere.
While the infighting has died down, it will continue throughout the coming year as Congress weighs in on the winners and losers in the fiscal 2021 budget. Policymakers should know that senior Pentagon leaders are not working with the same set of numbers.
Here’s an example. A common but flawed assumption persists that the total budget for the Department of Defense is divided roughly equally between the Army, Air Force, and Navy.

In the fiscal 2020 defense budget request, based on the pool of money allocated to the base budgets of the services alone, 35.6 percent goes to the Air Force, 27.9 percent goes to the Army, and 36.4 percent goes to the Navy (including the Marine Corps).
But those numbers are malleable. Whether a service chief uses only base budget numbers in making his case matters. Same with a service secretary including Overseas Contingency Operations (OCO) dollars in his or her arguments—especially now that a significant chunk of “emergency” funds are for entirely knowable and predictable base budget activities.
Therefore when you include OCO spending, 34.6 percent goes to the Air Force, 30.7 percent goes to the Army, and 34.7 percent goes to the Navy. Still, some of the services say this is an unfair analysis depending on their portion of global combatant commander requirements compared to their budget.
But the military departments together do not comprise the entire defense budget. A huge portion of their spending exists outside departmental budgets for health care, allowing further obfuscation of what each military branch actually spends.
Still, comparing the uniformed service spending to an account fast-approaching the size of a standalone branch is helpful, namely defense-wide spending. From the Missile Defense Agency to Special Operations Command to Washington Headquarters Service, the so-called Pentagon “fourth estate” essentially refers to all of the entities within the Defense Department that are considered enterprise-wide. This ranges from administrative and support functions like human resources to combat enablers like the Defense Intelligence Agency (DIA) and DARPA.
Unlike the military services, the fourth estate resembles a loosely affiliated patchwork of semi-autonomous agencies. This spending accounted for nearly one-fifth of the defense budget in the 2020 request.
As House Armed Services Committee Ranking Member Mac Thornberry has noted, these agencies contain up to about a quarter of the Pentagon’s workforce — nearly half of its civilian personnel—and control a contractor army estimated at 600,000 people.

Here again, which organization is considered on top versus not changes depending on whether or not Overseas Contingency Operations funding is incorporated.
For example, if the base budget requests alone are evaluated, then the budget breakdown looks like this: 29.0 percent of the budget goes to the Air Force, 21.9 percent goes to the Army, 39.5 percent goes to the Navy and nearly 20 percent of the total base budget for defense spending is dedicated to the defense-wide accounts. Each service receives a smaller share of the total base budget.

However, if OCO funding is included, then the differences between the services budgets change. Instead, 28.9 percent goes to the Air Force, 25.7 percent goes to Army, 29.0 percent goes to the Navy and 16.4 percent goes to defense-wide spending. Either way, once defense-wide spending is included in the defense budget total, the Army receives the least funding of the three military services.
But what about the Air Force? Its chief could easily argue the service’s budget is artificially inflated thanks to the Intelligence Community “pass through” funds that come under the Air Force budget umbrella. The Air Force gets zero say in how this money is spent, mostly on space assets.
In other words, the black intel budget inside the blue Air Force service share of the pie bloats the Air Force’s topline while undervaluing the Intelligence Community’s sizeable means. It also hinders Congressional oversight and good governance, accountability and transparency.
To complicate matters further, this intel carve out alone fails to convey the full impact of the newest branch of the Armed Forces: the newly-minted Space Force, which is also funded by the Air Force.
Just last week, Vice Chairman of the Joint Chiefs of Staff Gen. John Hyten discussed the challenges of accurately communicating the Space Force budget to Congress. As Mark Cancian of the Center for Strategic and International Studies (CSIS) wrote last year, the Air Force is sacrificing organizations and personnel to build the new service. Soon, the demand for new weapons and sensors in both low-earth orbit and geostationary satellites will follow, along with serious investments.
While the final size of Space Force is still unclear, Todd Harrison (CSIS) has previously demonstrated that the wedge will only grow. This means the Air Force will sacrifice the most budget share of any service to create and enable the Space Force.
If the intelligence funds are excluded from the Air Force’s total, then the Air Force’s share of the budget, including OCO, drops to 23.3 percent, making it the lowest funded service.

This lens, in particular, often leads sea power advocates to cry wolf. After all, the Department of the Navy is also responsible for Marine Corps funding. But equating Air Force “pass-through” money to the Marine Corps is a false dichotomy. The Secretary of the Navy has oversight responsibility for the Navy and the Marines. The two services’ missions are closely aligned and highly complementary. The Marines serve aboard ships, usually fly from ships and their ability to fight, in most circumstances, relies on naval support. The two services are deeply intertwined.

If each of the above arguments is given its due, the Marine Corps and the Intelligence Community funds are carved out of the budgets for the Department of the Navy and the Air Force, while OCO and defense-wide spending are also included. Soon, Space Force should be included but for now the full budgetary impacts remain undetermined.

In this most detailed breakout, defense-wide spending is 16.4 percent of the total defense budget, 25.7 percent of the budget goes to the Army, 23.3 percent goes to the Air Force, and 22.5 percent goes to the Navy.
All of the arguments are hotly contested—both within and between the services and do not account for every consideration that policymakers must weigh against the demands of the wider strategic environment facing the US military in the coming decade. Even so, it’s important to create a shared baseline. For analysis and potentially decision-making to shift these investments in the future based on a forthcoming joint warfighting concept.
Ultimately, each service can have their own set of numbers, but this does little to help make a decision. As the pressure mounts for senior Pentagon leaders to defend their respective priorities during the budget debates of fiscal year 2021, Congress must be presented with accurate information. Carve out everything or carve out nothing. Congress, and the Pentagon, should be working with the same set of facts. (MACKENZIE EAGLEN).

Israeli manufacturer Rafael claims it’s worked with the Army to get the weight of the...