Acasă Actualitate We offer an exclusive interview with the Air Force’s leading civilian and... 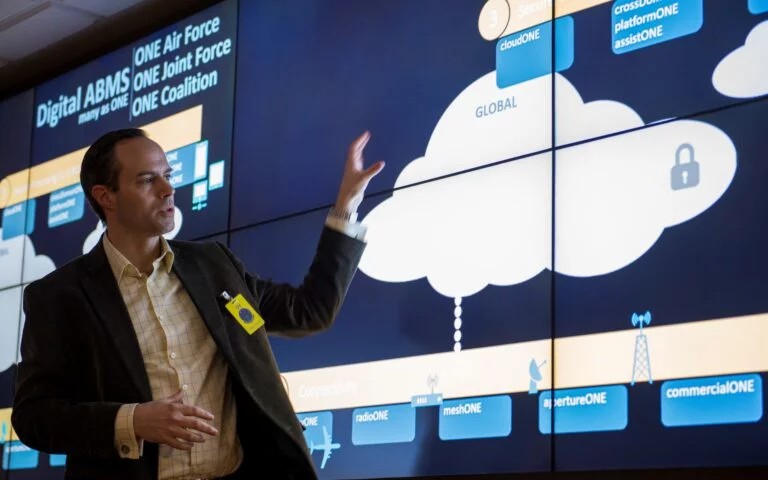 Brig. Gen. David “Kumo” Kumashiro
“I think it’s fair to say that our approach — the Air Force approach to JADC2 via the ABMS family of systems — has caught a lot of interest, because it is in part about how these various kind of product areas kind of fit together,” added Kumashiro.
Dunlap is visibly proud of what the ABMS program has accomplished over the past year. “So, we’ve developed this — the architecture to be able to make JADC2 work within the Air Force and we think collaboratively across the other services in tandem with them and our allies and partners as well,” he said. “We’ve got an architecture. We have identified the product categories and product lines that need to get developed with hardware and software to be able to make the vision work, and the talking points about where all of us want to go in terms of realizing the multi-domain vision.”
“And within the technology piece,” he added, “we’ve got a new approach set up to be able to develop and acquire the system through the four-month cycles that didn’t exist before,” Dunlap added.
Still, both Dunlap and Kumashiro know that Congress is casting a skeptical eye on the effort. The 2020 National Defense Authorization Act requires a raft of reports and documentation from the Air Force about the program, which currently is dispersed throughout the budget. Along with the 2021 budget request, lawmakers want to see a “list that identifies each program, project, and activity that contributes to the architecture of the Advanced Battle Management System.” They also want the Air Force to provide the “requirements for the networked data architecture” to underpin ABMS.
While congressional authorizers cut the main ABMS budget line request of $35.6 million, congressional appropriators boosted the funding to $43.6 million — but the extra funds are tagged for extra work to better define the requirements.
All totaled, a service spokesperson said, the Air Force will be able to spend about $185 million in ABMS-related funding from the 2020 budget. The 2021 budget will be the first request to consolidate all the ABMS activity under one program budget line, Roper told me back in September. And he said at the Center for a New American Security on Nov. 26 that the 2021 request will will include “sizeable dollars” for ABMS.

Navy photo
Rear Adm. William Chase
He stressed that JADC2 is not only about technology. It also involves developing concepts of operations (CONOPS) for how command and control relationships would work across domains.
“When we talk JADC2, we are talking not just about the Advanced Battle Management System and the technology,” he said. “That is a pillar, a leg of JADC2. We are also talking about the accompanying operating concepts. And when we talk operating concepts, we’re talking tactics, techniques, procedures (TTPs). We’re talking the concept of operations, and concepts of employment. We are talking about the doctrine that has been established through tabletop exercises; war games that have then been validated through the assessment process and go through the warfighter analytical process.”
This will include answering messy questions such as that raised by Lt. Gen. Eric Wesley, deputy commander of Army Futures Command, at several recent panel discussions about MDO and JADC2 — who will have the power to decide who can task imaging satellites to surveil or pinpoint a target?
Further, Kumashiro said, there will need to develop training schemes and readiness metrics to implement JADC2.
“The last piece is the readiness of the force … that we can take these operating concepts and these technologies and then actually field them, get them into the warfighter’s hands,” he said. This is being done through the Shadow Ops Center, he said, “and our 13 Oscar career field, which are those multi-domain airmen that can actually conduct those types of operations.” (The 13 Oscar career track was created for C2 operators back in 2018 to support MDO.) THERESA HITCHENS

BUILDING COHESION FOR A SHARED PROSPERITY IN A DANUBE REGION