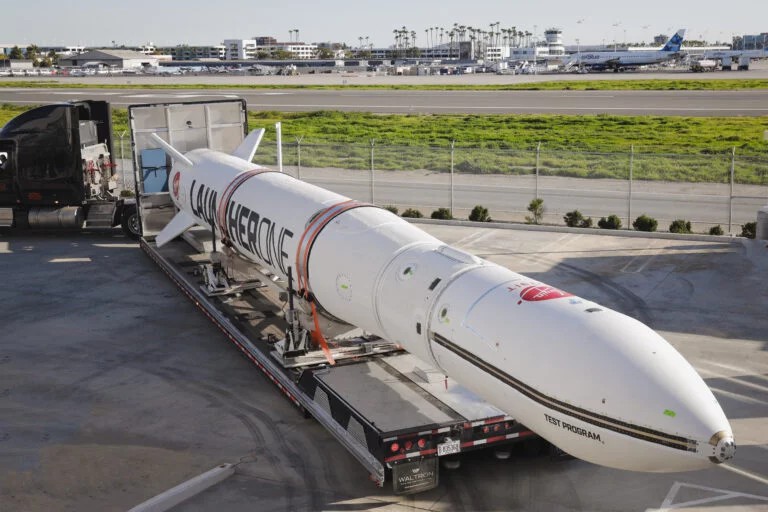 Virgin Orbit’s LauncherOne
LONG BEACH, CALIF: Pieces of six different rockets in various phases of manufacture are spread out over the 180,000 square foot floor at the Virgin Orbit factory here, as the company prepares for the first flight of its air-launched LauncherOne space vehicle. That flight is expected “within weeks, not months,” says Mandy Vaughn, president of the firm’s US unit VOX Space, established in 2017.
Vaughn drove up from her office in El Segundo yesterday to give me a tour of the five-year old facility. It’s a bright and airy space, including a small cafeteria with furniture in Virgin’s signature red and white — fitting for Virgin’s ebullient founder Sir Richard Branson. The facility hosts clean rooms, a specialized 3D printer, typical assembly spaces, and several ginormous racks, including one that Vaughn compared to a set from Cirque de Soleil that is used for testing rocket stage separation.
Propulsion unit at Virgin Orbit Long Beach factory

LauncherOne’s first flight has been longer in coming that Virgin Orbit had hoped — it was originally planned for last year — but Vaughn is clearly pumped about where things are now.
“We’re about to embark on some fun stuff,” she said, with LauncherOne currently undergoing preliminary tests at Virgin’s launch site in the Mojave Desert. (I was invited to go out to watch some of the testing, but unfortunately couldn’t fit it in during this trip to see the Minuteman III’s first 2020 launch on Wednesday.)
While loathe to publicly give hard dates, Vaughn said the goal is for the maiden voyage of LauncherOne to happen early this spring. “I want to see a kickass flight,” she said, “really really soon!”
From then, the plan is to move out rapidly with a launch for NASA of a group of tiny Cubesats mid-year, and Virgin’s first satellite launch for DoD by the end of the year. Vaughn said she is looking to accomplish four to six flights this year. The idea is to establish as of the end of 2020 a regular cadence of routine launches, she said.
As Breaking D readers may remember, Virgin Orbit garnered its first Air Force contract back in 2017 via the Air Forces Defense Innovation Unit (then known as DIUx for Experimental.) The $4.8 million contract, using Other Transaction Authority (OTA) money that allows the Air Force flexibility to work with non-traditional vendors, involves launching what Vaughn called a “mishmash of Cubesats” fora few different DoD organizations.

Virgin Orbit Long Beach factory
The launch manifest is organized by DoD’s Space Test Program (STP), managed by Space and Missile Systems Center (SMC) headquartered in El Segundo. STP has been around for decades, working to orbit Army, Navy and Air Force space experiments that are chosen by the DoD Space Experiments Review Board (SERB) — and up to now, chaired by the head of Air Force acquisition, Will Roper. However, now that SMC is officially a part of the new Space Force, it is likely that the SERB’s chairmanship will shift to the new Air Force assistant secretary for Space Acquisition and Integration once that office has stood up –– sometime before the October 2022 deadline mandated by the 2020 National Defense Acquisition Act.
Virgin’s DoD launch will take place from Anderson AFB in Guam, a location the company chose specifically with US military launches in mind.
LauncherOne stands 70 feet tall, although it looks tiny when fixed underneath its carrier aircraft, the Cosmic Girl, a modified 747-400. It can carry a payload of 300 kilograms to 500 kilometers in a sun synchronous orbit, and 500 kilos to equatorial orbit. It can launch from any commercial or DoD runway sufficient for a 747 launch.

While in its current configuration, Cosmic Girl is essentially a passenger aircraft, Vaughn said she’d like to see a cargo variant in future. Not only could an aircraft with a hardened floor and a wider cargo bay door enable LauncherOne to be self sufficient in that all its support structures could be carried on the same aircraft, she explained, it also would allow the possibility for the plane to carry other types of payloads for the US or allied militaries.
VOX is responsible for US government sales, as well as sales of launch services to the other Five Eyes allies: Australia, Canada, New Zealand and the United Kingdom, Vaughn said. Virgin Orbit deals directly with other US allies such as Japan and Israel.
Indeed, Virgin Orbit on Jan. 28 announced a new agreement with Israeli firm ImageSat International (ISI), which manufactures high-resolution, small imagery sats, “to develop an end-to-end responsive space service offering focused on national security customers.” (THERESA HITCHENS).