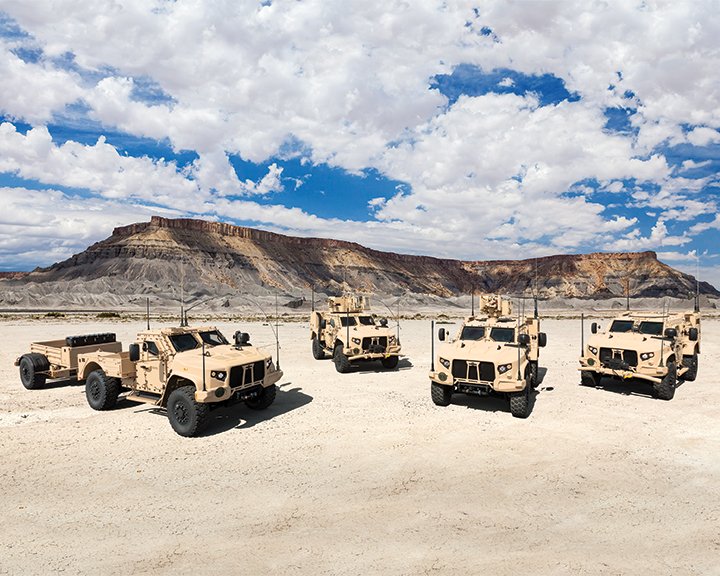 Oshkosh photo
JLTV on the Oshkosh production line.
PENTAGON: As the Army moves billions into new high-tech weapons, truck-maker Oshkosh is feeling the pinch. The 2021 budget request not only decreases spending on three Oshkosh vehicles, the 10-wheel FHTV, the 6-wheel FMTV, and 4×4 JLTV: It also calls for a new competition the following fiscal year for JLTV, the Joint Light Tactical Vehicle originally meant to replace the Humvee.

SOURCE: US Army, “FY 2021 President’s Budget Highlights”That’s especially worrying for the Wisconsin company, because JLTV is the youngest program of the three and the most important for the company’s long-term future. But then-Army Secretary Mark Esper — now Secretary of Defense — has publicly criticized JLTV as overly specialized for the kind of counterinsurgency conflicts the Pentagon is no longer focused on. While the Army insists it will still buy the planned total of 49,099 trucks, eventually, it keeps slowing down the annual rate and extended the deadline to complete production, which now won’t end until 2042. (That leaves the Humvee in service, at least with some units, indefinitely).
Why recompete? “We do that to drive the price down,” said Deputy Assistant Army Secretary John Daniels this morning, when my colleague Jen Judson asked about the proposal. But any new competition would be two fiscal years from now and Daniels declined to give any details.
The only other information about the plan is buried on page 102 of the fifth volume of the Army’s newly released procurement request for 2021, which also includes projections for 2022 and beyond. Under JLTV, the “justification book” says that:
“Current contract options may be exercised through 30 November 2023 assuming contractual quantity headspace is still available. Current funding indicates headspace quantity of 16,901 may be achieved in FY 2021, with competitive follow on contract award anticipated in FY 2022. A split procurement will occur between the existing Oshkosh contract and the new competitively awarded contract based on the approved acquisition strategy. The Program Office continues to gather insight from industry partners to better understand their position to ensure strong competition for the follow on contract.”
In plain English, this means Oshkosh’s current contract to build Joint Light Tactical Vehicles runs though fall 2023. Since production will continue for decades, the Army will have to award a new contract to buy more JLTVs for itself, the other services and allies. But when it comes time to award that follow-on contract, the service doesn’t want Oshkosh to be its only option: It wants at least one competitor to drive down costs.

That sounds like Capitalism 101, but it’s not so simple to do in practice. The Army historically prefers to have large numbers of a single type of vehicle: A homogenous force allows efficiencies of scale. If you have lots of different types of vehicles doing the same job, each one requires a different training course for troops, a stockpile of unique and incompatible spare parts, its own development and testing program, and its own production line. (In fact, Nazi Germany’s fondness for small production runs of many different types of trucks, tanks, and other vehicles was yet one more reason it lost the war).
So there are two ways the Army could create competition for JLTV, each with its own difficulties:
Require each competitor to submit its own design, so the Army could buy a vehicle that isn’t the Oshkosh JLTV, but can do the same job. Besides the logistical headaches of a mixed fleet, the Army would also have to face the decision either to pay competitors or to develop their JLTV alternatives – i.e. at least partially at the taxpayers’ expense – or require would-be bidders to assume all the cost and risk – a barrier to entry that would limit even a big company’s interest in competing.
Require Oshkosh to share its design with potential competitors, so the Army could buy a vehicle that’s identical to the Oshkosh JLTV but built by someone else, potentially at a lower price. Yes, there are competitions that work this way, but they typically require the government to own the rights to the design. Since Oshkosh owns the intellectual property for JLTV, the Army would have to pay them for it – assuming they’re willing to sell.
Neither the Army nor Oshkosh responded to our questions. If they do, we’ll update this story or publish a sequel when we learn more. (SYDNEY J. FREEDBERG JR.).

Chinese companies are offering drones for export that they claim can stage lethal airstrikes autonomously,...

This B-1 left from home base, got a great training mission, and showed its capability...