Acasă Actualitate “There’s a lot of confusion about the budget.” 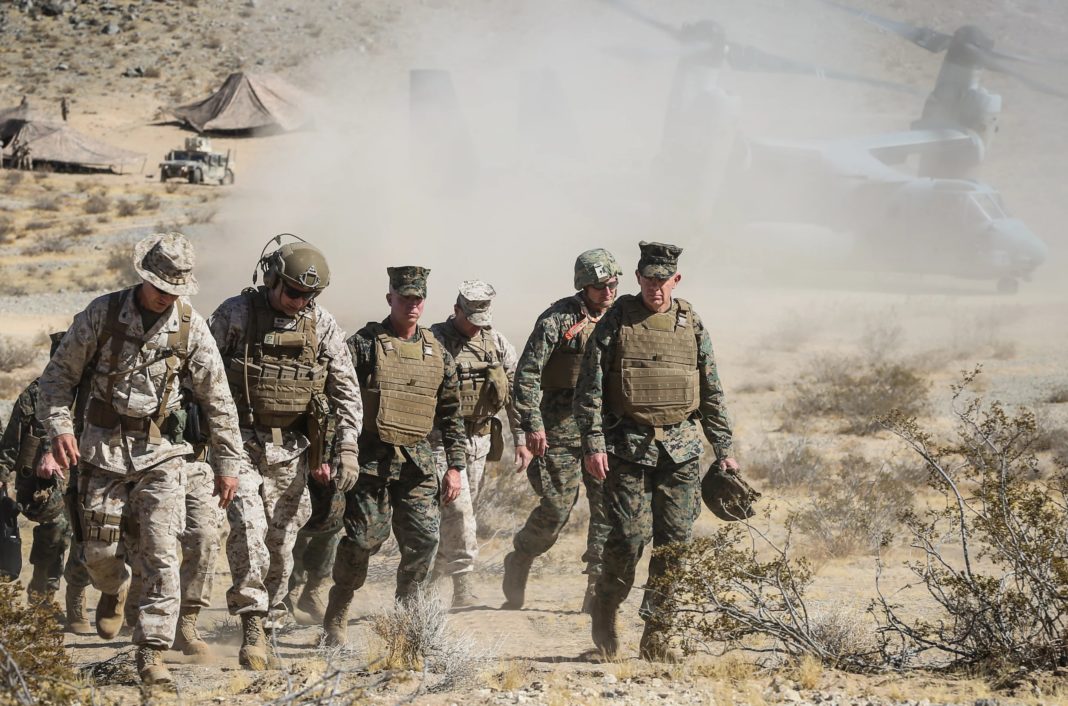 Marine Corps Commandant Gen. David Berger at Twentynine Palms.
CAPITOL HILL: Navy and Marine Corps leaders met with Defense Secretary Mark Esper and his staff Monday to work through the Navy/Marine Corps ambitious new shipbuilding and force structure plan, which is expected to be released in the next few weeks.
The meeting, which included Deputy Secretary David Norquist, Pentagon budget officials, and the top military and civilian leaders, came as Esper weighs the merits of the Navy’s plan to reach 355 ships as soon as next decade, a heavy lift that would add more than 50 ships to the current fleet, some of which would include new classes of ships the Navy hasn’t decided on yet.
“The Navy and Marine Corps’ work is largely done,” Marine Commandant Gen. David Berger said at a forum on amphibious ships on Capitol Hill. Berger said he’s unsure when the secretary’s review will be complete, or when the plan will be formally blessed and released to the public.
Acting Navy Secretary Thomas Modly said late last year he wanted the review to be wrapped up by January 15, but just a few days before that he acknowledged that work was ongoing as the Navy struggles with a flat shipbuilding budget for years to come while finding ways to build new classes of lighter, faster, and cheaper ships, presumably including unmanned platforms.
The January date was always problematic, defense officials have acknowledged, as it would have come just weeks before the Feb. 10 release of the fiscal 2021 defense budget. The plan, formally dubbed the Integrated Naval Force Structure Assessment, isn’t meant to move the needle on that budget, but will make an impact on the 2022 request and beyond, and its release around the same time as the ‘21 ask would likely confuse the issue.
That 2021 budget request has already come under fire from both Democrats and Republicans in Congress, and was labeled “dead on arrival” by Rep. Joe Courtney, chair of the House Armed Services seapower and projection forces subcommittee.
The proposal calls for a $4 billion reduction from last year’s shipbuilding budget, and asks Congress for $3 billion less overall from 2020, part of an overall reduction of 11 ships the Navy had planned to buy by 2025.
“Congress can’t want a bigger and stronger fleet more than the Navy and Marine Corps want a bigger and stronger fleet,” Rep. Mike Gallagher, a member of the House Armed Services Committee, said at the shipbuilding meeting today. “There’s a lot of confusion about the budget,” on the Hill, he said, as the Navy proposes cutting budgets and ships while promising to grow.
Berger and Gallagher spoke a day after the Marine Corps proposed cutting 2,000 troops amid significant cuts that will see the service walk away from older weapons systems in a series of cost-cutting efforts.
“I understand the perspective that mass has a quality all its own,” Berger said today. “But right now we need quality. We will get smaller in order to get better, and we need the resources that when we shrink a little bit in structure, we’re gonna take that money and pour it into the Marine Corps you all need. We’re not getting smaller for smaller’s stake.” Instead, “we’ll start to divest with a plan to reinvest for what we want to be in 5, 10 years out.”
Berger also confirmed that the projection for Pentagon budgets in the coming years isn’t as rosy as it once was. “We think flat,” budgets for the foreseeable future are most likely he told me after the event.
In addition to the Navy and Marine Corps shipbuilding plan, there’s an eagerly anticipated Marine force structure assessment underway which Berger has said will re-envision how the Marine Corps equips, deploys, and fights. He has said he wants smaller amphibious ships to move small groups of Marines around the Pacific, and is looking at ways to fly F-35Bs from ad hoc landing strips while equipping units with standoff precision weapons so they can protect the fleet from shore.
That plan should be released later this month, around the time he heads to Congress to sell an already unpopular budget — as well as his vision of the future — to Congress. (PAUL MCLEARY).

The experiment is expected to eventually lead to the wholesale replacement of the Air Force’s...