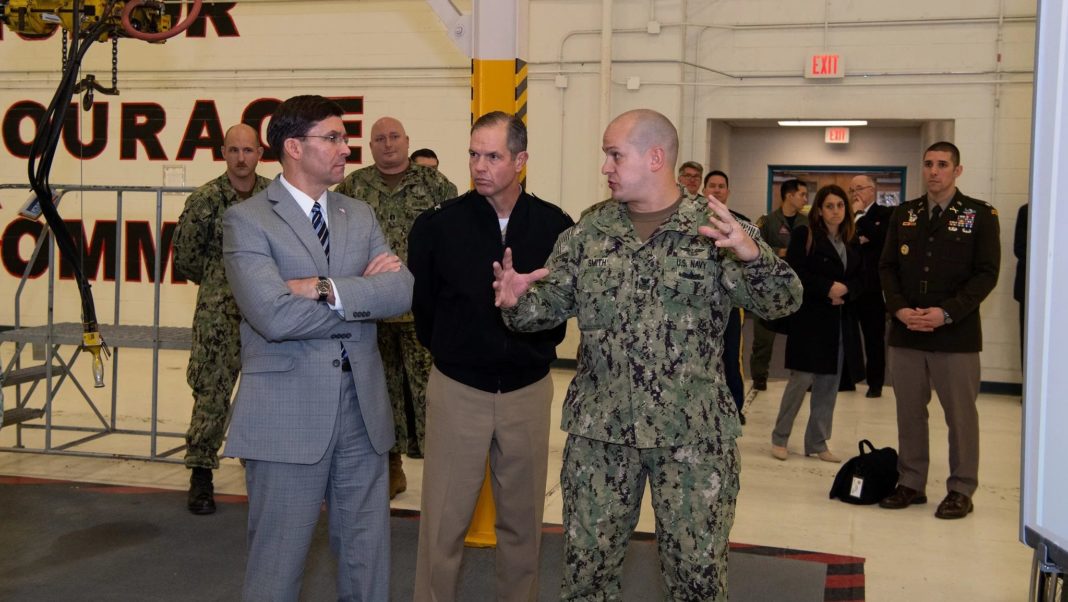 Defense Secretary Mark Esper meets with instructors during a visit to the Naval Air Technical Training Center, in Pensacola.
WASHINGTON: A day after a heated meeting between House lawmakers and the Pentagon’s top leadership on Wednesday, Defense Secretary Mark Esper sent a letter offering an olive branch of sorts, calling the Armed Services Committee “a critical partner” in building the budget and providing details on how the Navy will modernize.
The letter, sent late Thursday to House Armed Services chair Rep. Adam Smith and obtained by Breaking Defense, underscores Esper’s goal of reaching a 355-ship fleet.“I personally believe the force structure we need is even larger,” he wrote. At the same time this new force structure will have to be integrated within a new Joint Warfighting Concept expected to be crafted by the end of the year.
Esper walks through some of the reasons he held up both the Navy’s 30-year shipbuilding plan and the long-awaited Integrated Force Structure Assessment (INFSA), both of which are expected to map a path for building a faster, leaner and less costly Navy.
The law requires the 30-year plan be submitted to Congress, while the INFSA is a new effort to sketch the new capabilities the Navy might need in the future to confront advanced adversaries like China, and how it can integrate more closely with the Marine Corps.
Both plans, as Democratic and Republican lawmakers admonished Esper during Wednesday’s hearing, are late. The secretary saw the INSFA, and concerned with what he was hearing, put both plans on hold while tasking Deputy Defense Secretary David Norquist to run a series of war games to provide the basis for the plan, a move which essentially moves the center of gravity to the secretary’s office.
Pressed Wednesday on why he ordered the relook, Esper said it kept the old deployment and readiness model, which is broken: It “hasn’t worked for years, so why should we assume it will work in the future?”
The letter says the Pentagon “must explore a range of alternative ‘future fleet’ designs that fully meet the demands of the [National Defense Strategy], while being compatible with future warfighting doctrine, threat developments, and budget constraints.”
The results of Norquist’s work will be briefed to Esper over the summer and “will drive future shipbuilding plans,” he writes, providing the first hint of a timeline for wrapping up the work.
Those plans will also have to align with work the Joint Staff is doing to draft the new Joint Warfighting Concept designed to guide how all of the branches of the armed forces will train, equip, and fight against modern adversaries, an effort that will underpin all other decisions in the department about how to continue to modernize. As Vice Chairman of the Joint Chiefs John Hyten told us, this will be the guidepost for developing All Domain Operations throughout the military and building a force that can fight through them all.
Another sticking point Wednesday was the admission to the HASC by Acting Navy Secretary Thomas Modly and Chief of Naval Operations Adm. Michael Gilday that they were never consulted before being stripped of a $650 million America-class amphibious assault ship, a $261 million transport ship, along with F-35s and P-8 surveillance planes in the 2020 defense bill to pay for the administration’s border wall. Congress passed the bill in December and it was signed by President Trump the same month.
Defense officials have said the Department of Homeland Security sent the $3.8 billion request in mid-January, forcing the Pentagon to scramble to come up with the money, which they released publicly on Feb 13.
Esper asked DoD’s comptroller Elaine McCusker to provide recommendations “in consultation with the chairman of the Joint Chiefs of Staff,” Pentagon spokesman Lt. Col Chris Mitchell said in a statement. “Based on the recommendations of the Army Corps of Engineers, the comptroller and the chairman of the Joint Chiefs, Secretary Esper made the decision to fund the construction of 177 miles of border barrier.”
Then the Navy was informed.
The $3.8 billion came from programs added by Congress that were not in the Pentagon’s original budget request, allowing Esper and Milley to say they were beyond what was required.
Rep. Smith told reporters Thursday he was working with lawmakers from both parties to draft legislation that would bar the Pentagon from moving money like this again.
“Time is of the essence, and I’m right now working with leadership and others to try to get a piece of legislation to the floor as quickly as possible,” Smith said. “They robbed the bank and they are now running away with the money. We need to stop them before they get too far.”
While any such bill would likely attract some republican support in the House, it’s likely to face a tougher road in the Senate. (PAUL MCLEARY).

In a first, the USS Portland took down a target drone with a new solid...

Guess which half of Sun Tzu’s ancient maxim is the Pentagon’s problem?

The strict U.S warning to Israel to limit ties with China has its first result...