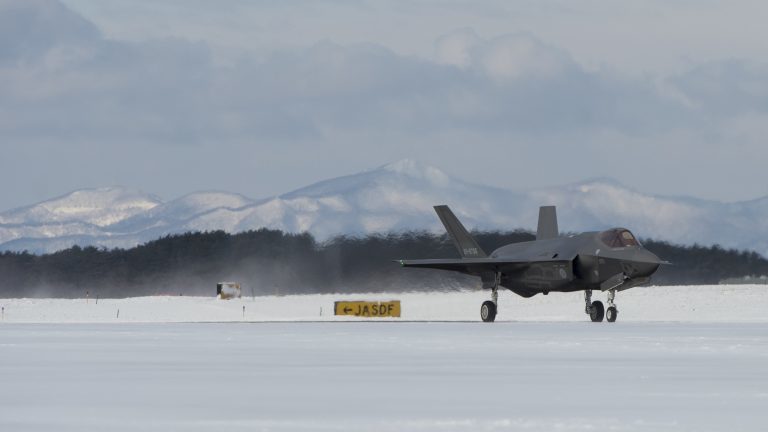 F-35 Wing Assembly in Cameri, Italy
WASHINGTON: The corona virus — COVID-19 — has forced the closure of two F-35-related facilities in Italy and Japan, the Pentagon’s acquisition chief told reporters today.
Lockheed Martin has stopped production of F-35 components at a Mitsubishi Heavy Industries factory in Japan and ordered employees at another F-35 facility in Italy to work from home, Ellen Lord, undersecretary for acquisition and sustainment, told reporters on the sidelines of the McAleese and Associates conference here.
The shutdowns are the first indication that the COVID-19 outbreak may begin to affect the highly integrated global defense industrial base, though Lord said he didn’t know of any other programs that have been affected.

“Right now we have not seen any effects, but I have a team working on that very heavily right now,” Lord said.
“I believe they have decided to shut down for a week,” Lord said of the Japanese facility, but “it doesn’t look like it is affecting deliveries” of the aircraft, she added. Word of the shutterings crossed her desk just this morning.
Assistant Secretary of Defense for Homeland Defense and Global Security Ken Rapuano has been tasked with monitoring the virus’ impact on allies, to include “scenario planning” on potential impacts.
Pentagon spokesman Lt. Col Mike Andrews added in a statement that in Japan, the temporary Mitsubishi closure only affects Japanese aircraft, while Lockheed “is restricting travel” to the Cameri facility citing a US Embassy travel alert.
“Pratt and Whitney Resident Engine Team in Cameri have been directed to telework,” he added. “There have been no impacts to the production line.”
The thee-star chief of the F-35 Joint Program Office, Air Force Lt. Gen. Eric Frick, added some more detail on the Japan problem, although he didn’t mention the issues in Italy.

“i was informed yesterday, for what it’s worth, that in accordance with Japanese governmental instructions, they have paused work at the Nagoya Final assembly and checkpoint or FACO, facility, for a week, and then anticipate the resumption [of work],” Lt. Gen. Frick told the McAleese conference this morning. “I don’t see any other disruption.”
“We are working very closely with DCMA [the Defense Contract Management Agency] to monitor the impact of the coronavirus on the F-35 program,” he said, “[and] we will continue to monitor the situation as it evolves.” (PAUL MCLEARY).

With one icebreaker down, the US has one left in port — with no new...

Three American carrier strike groups are moving in the Philippine Sea while China shuts down...