Acasă Actualitate US and foreign missiles alike are welcome at next year’s missile defense... 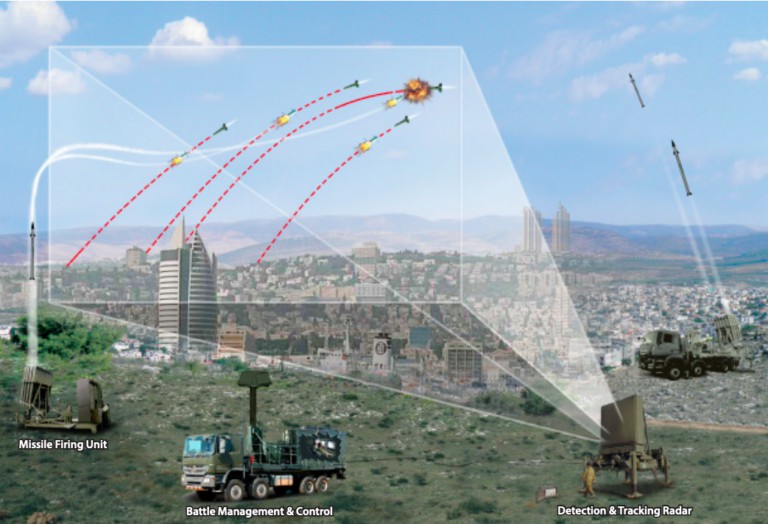 Rafael sells the Iron Dome as an integrated system with radar, command post, and launcher. The US Army wants missiles that work with its command system and radars. (Rafael graphic)
CAPITOL HILL: If the Israeli-made Iron Dome wants to be a part of the US Army’s future missile defense system, Army officials made clear here last week, it has to work with the American IBCS command-and-control network.
Can the current version of Iron Dome actually do that? I asked Bruce Jette, the Army’s civilian acquisition chief, during a recess at a hearing here on Thursday.
“No,” he said.

That doesn’t mean, however, that the Israelis can’t bring the Iron Dome system’s missile, the Tamir, to the “shoot off” next year — as long as they, and any other would-be competitors, make their missiles compatible with IBCS. Rather than each vendor bringing their own bespoke radar and command post, each missile in contention will have to get targeting data and firing commands from the Integrated Air & Missile Defense (IAMD) Battle Command System, which is meant to connect all Army radars, launchers, and command posts in the future.
“We’re going to ask them to at least get a brassboard version of their system to talk to IBCS,” Jette told me, using an engineering term for a rough working prototype that’s functional enough for field testing, but not yet a complete system. “Come show me, in whatever format you can, that it can talk to my system, which I will not change, because we’ve invested a great deal in IBCS and it works.”
The Army has already bought two batteries of Iron Dome, at Congress’s insistence. But the service’s modernization chief, Gen. John “Mike” Murray, made clear to me last week that he has no interest in buying future air and missile defense equipment that can’t connect with IBCS, the Integrated Air & Missile Defense (IAMDS) Battle Command System
Why is IBCS so important? Historically, missile defense batteries are stand-alone, vertically integrated systems. The Iron Dome radar feeds targeting data to an Iron Dome command post, which then fires an Iron Dome Tamir missile. The original Patriot, likewise, had its own radar, command post, and launcher, none of which could share data with other Army systems. If a Patriot radar detected a target that could only be shot down by another system, say THAAD, it couldn’t pass the targeting data to the other battery so they could fire.
Now the Army has picked Raytheon to build a new Lower Tier Air & Missile Defense Sensor (LTAMDS). What began as simply a replacement for the Patriot radar, but will now feed data to any command post on the IBCS network.
Those command posts, in turn, will use IBCS to relay targeting data from LTAMDS, Sentinel radars, and other sensors to whatever missile – or, in future, whatever high-energy laser or microwave beam — is best suited to shoot down particular targets, from drones to helicopters to cruise missiles.
Finally, the main shooter for IBCS will be yet another acronym, IFPC, the Indirect Fire Protection Capability, a truck-mounted multi-purpose launcher capable of physically holding and electronically aiming multiple types of missiles side by side.
Iron Dome’s Tamir can absolutely compete to be one of the missiles that goes on the IFPC launcher, Jette told me. In fact, he said, “we fired a Tamir off the Multi-Mission Launcher.”
But IFPC has had problems of its own, leading the Army to reboot the program last year. In the interview transcript below – edited for length and clarity – Jette explains why that had to happen, how the Army is changing course, and how the service plans to modernize its missile defenses in the future.

Bruce Jette, Assistant Secretary of the Army for Acquisition, Logistics, & Technology: If you go back to the original IFPC [Indirect Fire Protection Capability] program, we had a Multi-Mission Launcher, the MML. The idea behind it was a very good idea, in that it allowed us to load different missiles for different threats. Some missiles were more effective against some threats than others. I can get the really high-end missile to attack a low-end threat, but if I can do it with a less expensive missile, I’d like to have that option too.
The problem was, in many ways, how we modularized the approach, where we over-specified the design. Basically, we designed the MML without the industry’s input, and then the industry put their missiles onto the system.
Sydney Freedberg: And then they didn’t quite fit.
Jette: Well, they fit physically. But there are subtleties when you take an air-launched missile, for example, that’s always hanging under the wing of jet: The cooling and heating issues are different than if I’ve got it in a box in the middle of the desert.
Frankly, it’s difficult to anticipate every possible issue that can come up. That’s why you do prototyping: to check out physical, electronic, cooling, heating, all the characteristics of the system.
In the new effort, we retain the modularity option, and yet we want to put industry into a position where they define their system, where their system has to be able to just simply interface with our baseline system. That way IBCS should be able to work with each of the missiles.
Any defense system that puts up a target has to be able to report that to IBCS. IBCS puts the fires commander in a position to be able to select the right weapon system against the target, so we have a toolbox of different options that we can use.
We’ve actually demonstrated that we can run a number of the missiles to include the Iron Dome missile: We fired a Tamir off the Multi-Mission Launcher. So, the Iron Dome is a very viable candidate and we may pick one or more candidates depending on the mix.
Sydney Freedberg: So what do the companies need to bring to the shoot-off? What parts of their systems should they leave behind?
Jette: It’s going to be their missiles at the shoot-off. We’re still going to use our radars; LTAMDS is going to be the radar of choice.
The shoot off is to see if the performance of the missiles are aligned with what we believe and expect. But a shoot-off isn’t the system. The shoot-off is basically a demonstration.
Then, to build the whole system, we come back and we’ll probably go to the next phase, which can be, “Okay, give me your rough digital design that shows us how we could get this within a particular configuration on a modular multi-purpose launcher that works with IBCS.”
I’m not messing with IBCS itself. I’m not changing it. If I’ve got five different missiles, if I’m going to be flexible, I may load a driver inside of IBCS, just like when you plug your mouse into a USB port, the driver loads that lets you run that specific accessory. IBCS knows to talk to the interface module for each specific missile, which then translates IBCS commands into the language necessary for that missile to work.
The simplest way to think of it is, you’ve got a bunch of USB plugs and cables, and I can plug anything in. The drivers load and IBCS knows the first missile is missile type A, the second missile is missile type B, the third missile is missile type C. Yet IBCS itself has been maintained as a mature, single module.
That way you, the contractor, give me very little code. What code you do give me is specifically the code that I need to be able to communicate with your module. One of the things you always end up with, with things like missile systems, is proprietary data that they just don’t want to share. This way, you put your proprietary data inside of your missile, inside of your interface module, whatever you want, and I can still communicate with it, it still functions — but I’m not asking to get into the details of your inner programming.
We’re going to ask them to at least get a brassboard version of their system to talk to IBCS. Brassboard implies that it doesn’t have to be combat ready: It’s a prototype.
But what we want to know is that in fact IBCS can talk to that missile and do the fire commands and the status requirements. We’re not betting taxpayer dollars on a wish and prayer that somebody thinks someday they may be able to get the two things to talk to each other. Come show me, in whatever format you can, that it can talk to my system, which I will not change, because we’ve invested a great deal in IBCS and it works.
We’re also establishing an integration lab where any vendor that’s going to try and participate in this can come in and work on the interfaces, connect up their systems and try to make it work.
Sydney Freedberg: And that system integration lab will be available before the shoot-off so they can get ready?
Jette: Yes. We’re very supportive of giving our end of the system to any of the vendors. (SYDNEY J. FREEDBERG JR.).

Trump reportedly tells governors to ‘call your own shots’ on reopening