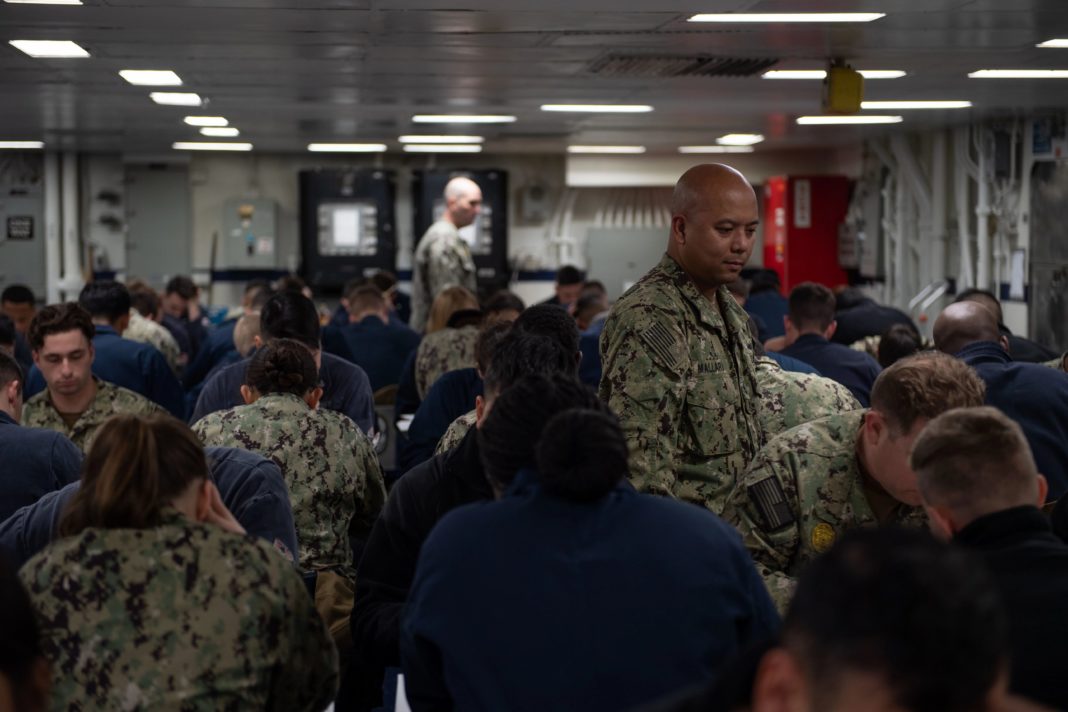 Sailors aboard the USS Boxer take an advancement exam earlier this month.
WASHINGTON: Not one of the Navy’s 82 ships currently underway has received coronavirus test kits for their crews, even as the number grows of sailors ashore testing positive.
“There are currently no FDA approved testing platforms that are suitable for placement on forward operating Naval Ships,” a Navy official told Breaking Defense via email. “So, the ships in the Pacific do not currently have the ability to conduct diagnostic testing for COVID-19. Depending on location, specimens can be sent for testing at shore based labs.”
The coronavirus had caused over 100 deaths in the United States — 8,000 worldwide — by Wednesday, but the federal government’s slow response to the global pandemic has led to testing rates much lower than countries like Italy and South Korea, both of which have been hit hard by the virus.
The Navy official said the fleet has three ships “with preventative medicine teams aboard with portable testing machines. These machines are currently only approved to do surveillance testing for COVID-19.”
That testing can detect signs of different illnesses, but cannot identify COVID-19. Currently, only one aircraft carrier, an amphibious ship, and the USS Blue Ridge command ship have the surveillance test machines.
How is the Navy coping with sailors who’ve had shore leave in countries where the virus has struck? Earlier this month, the Pacific Fleet instituted a rule mandating that ships leaving port observe a 14-day quarantine at sea. The aircraft carrier USS Theodore Roosevelt and cruiser USS Bunker Hill are wrapping up self-quarantine after sailors went ashore in Da Nang, Vietnam earlier this month. There have been no reports of cases on either ship.
Several Navy officials told me the service is in the process of obtaining testing kits to get out to the fleet, but could not offer a timeline for when that might happen, or how many kits might be available.

President Trump announced Wednesday he was invoking the Defense Production Act to meet urgent medical equipment needs. “We have millions of [masks]. We need millions more,” Trump said. “We need respirators. We need ventilators. We have a lot of ventilators, but we need more.”
On March 17, a group of Democratic Senators, led by Sen. Jack Reed, ranking member of the Senate Armed Services Committee, sent a letter to the president calling on him to sign the act.
The Pentagon is handing over 5 million respirator masks and 2,000 ventilators to the Department of Health and Human Services from the military’s strategic reserve, Defense Secretary Mark Esper said at the Pentagon Tuesday. One million masks will be available “immediately” Esper said at the White House today.
The Air Force also flew 500,000 COVID-19 testing kits from Italy to Memphis, Tennessee, on Monday.
Gen. Dave Goldfein, the Air Force chief of staff, told reporters Wednesday the kits will be distributed around the country.
On Tuesday, the Navy reported three coronavirus cases among sailors, two of whom are assigned to ships home-ported in San Diego and Everett, Washington. One sailor is assigned to the Littoral Combat Ship Coronado at Naval Base San Diego and the other to the guided-missile destroyer Ralph Johnson in Washington. Last week, another San Diego-based sailor assigned to the USS Boxer also tested positive, On Tuesday, the Navy also announced that a sailor who works on the staff of the 2nd Fleet in Norfolk, Va., tested positive. All of the ships are in port and not at sea.
But the lack of testing kits on ships underway represents a huge unknown for the thousands of sailors living in tight quarters at sea, where long work hours and shared living and eating facilities offers no opportunity to practice social distancing, which experts say is a key way to limit exposure to the coronavirus.
The Navy’s two hospital ships, the USNS Comfort and USNS Mercy are being activated to aid in the national response. A Navy official confirmed to Breaking Defense that the medical teams for the two ships are currently being notified of their upcoming deployment.
The idea is for the ships, which each have a 1,000 bed capacity, to take patients who are not suffering from COVID-19 from hospitals, making more room for coronavirus patients.
On Tuesday evening, theTrump administration requested an additional $45.8 billion from Congress to boost government agencies amid the coronavirus outbreak, including $8.3 billion for the Defense Department.
The money for the DoD is meant to “facilitate changes in servicemember personnel policy; expedite access to rapid COVID-19 diagnostics; ensure access to medical care, including additional medical countermeasures,” and address impacts the pandemic will likely have on logistics and supply chains, White House acting budget director Russell Vought said in a letter attached to the 118-page request. (PAUL MCLEARY).

Over the southwest desert, drones large and small are autonomously avoiding anti-aircraft threats while feeding...