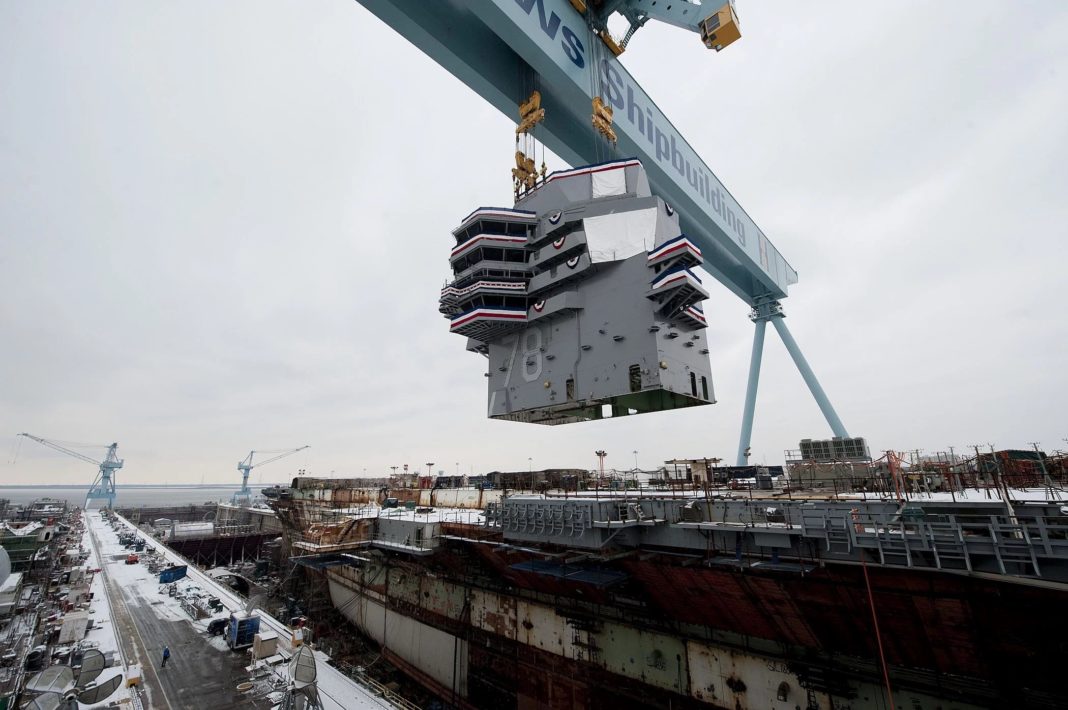 “That helps,” a defense industry source said, “because there’s no partisan stink on it.”

NEWPORT NEWS, Va. (Jan. 26, 2013) Huntington Ingalls Industries celebrated significant progress today as the 555-metric ton island was lowered onto the nuclear-powered aircraft carrier Gerald R. Ford (CVN 78) at the company’s Newport News Shipbuilding (NNS) division. The 60-foot long, 30-foot wide island was the 452nd lift of the nearly 500 total lifts needed to complete the aircraft carrier. (U.S. Navy photo courtesy Huntington Ingalls Industries/Released)
The nuclear carrier USS Ford (CVN-78) under construction at Newport News shipyard.
WASHINGTON: Major defense contractors and their suppliers, representing some 100,000 companies, should stay on the job during the COVID-19 pandemic, Ellen Lord, the DoD acquisition chief said in a memo sent to industry today.
Defense companies “are expected to maintain their normal work schedules,” Lord wrote in the memo obtained by Breaking Defense, even as state and local municipalities tell private companies to shift to telework options in an attempt to stem the spread of the virus.
Lord’s memo referred to a March 19 White House statement which identified the defense industry as part of the nation’s critical infrastructure. President Trump has also invoked the Defense Production Act, which allows the government to direct materials produced by manufacturers, this week. The act has not yet been invoked. Also, the DPA mainly applies to surge production or production of emergency capabilities.
“We need your support and dedication in these trying times to ensure the security of this Nation. I understand that this national emergency presents a challenge and we are dedicated to working closely with you to ensure the safety of the workforce and accomplishments of the national security mission.”
The list of jobs DoD says are critical to the country is long and varied, including engineers, manufacturing workers, IT and intelligence support, mechanics and maintainers, medical and pharmaceutical suppliers, and transportation services.
Lord has been holding daily calls with the heads of the major defense industry groups to share information and address concerns, but industry has asked for more guidance from the department, making today;’s memo some welcome news.
One industry source said the companies had been waiting days for this kind of direct guidance. “We felt a little bit like we were sticking our neck out on our own because we didn’t have word on what needs to remain open as local municipalities ordered people to stay home.”
Labor unions have reportedly wanted to follow local rules to keep workers home.
The critical infrastructure rules come from a presidential policy directive signed by President Obama in 2013, and was kept in place by the Trump administration. “That helps,” the defense industry source said, “because there’s no partisan stink on it.” However, it’s important to note that the directive is not law.
Bill Greenwalt, longtime Senate Armed Services Committee acquisition policy staffer and a top expert on the DPA and related issues, said Lord’s memo “seems more of a plea to industry to come together for patriotic means and keep the country running during a crisis.” After combing through the memo, which we shared with him, Greenwalt said he does “not see any link to a legal requirement to compel anyone to stay at their posts with this designation of being an essential critical infrastructure workforce.” Instead, “All I see here,” he said, “is a ‘special responsibility to continue operations’.”
The Lord memo comes a day after the Navy’s acquisition chief James Geurts sent letters to shipyards and shipbuilding companies, pointing out the White House rules. “I cannot stress enough the importance of accomplishing the mission, and notifying the government of any impediments that are considered likely to interfere with timely accomplishment of this mission,” he wrote, because “delivering or redelivering our ships to the fleet is a national need that is unwavering and crucial to our national security.” The memo was also obtained by BD.
Both Lord and Geurts stressed that companies also need to consider the health and safety of their workforce a top priority.
A spokesperson for Lord did not respond to a request for comment by publication, but Capt. Danny Hernandez, Geurts’s spokesperson, said: “Mr. Geurts has an open dialog with industry leadership to discuss best practices for delivering ships and aircraft to the Fleet, while also discussing CDC measures to protect the workforce. The team is working together and applying resources to the highest priority efforts to ensure we are maximizing readiness for the Navy.”
One of the critical sites for the Navy and DoD is Newport News Shipbuilding, the largest private ship builder in the US with 40,000 employees. The Norfolk Va.-based yard, which builds and repairs both Nimitz and Ford-class aircraft carriers, is currently extending liberal leave policies for employees.
“Our work is considered mission essential at the national level and we will continue to execute this critical work while continuing to safeguard our workforce,” spokesperson for parent company Huntington Ingalls, Beci Brenton said, adding the company is also using teleworking where possible while trying to come up with alternate work schedules in order to reduce crowding.
There have been no reports of COVID-19 infections among the major defense manufacturers yet, and companies are staggering shifts in factories and yards to lessen the chances of infection. While huge industrial projects and locations remain a major concern, there’s also worry that local conditions could affect the operations of some of the tens of thousands of small companies who supply the spare parts for tanks, submarines, and vehicles. So far there have been no discernible disruptions, but the supply chain, hit by years of cutbacks and cancellations, remains in many cases the weak link in the chain. (PAUL MCLEARY).

„Right now we’re on track to have a major collision in Low Earth Orbit roughly...