Acasă Actualitate “Our continued inability to build and sustain an adequate inventory of F-35... 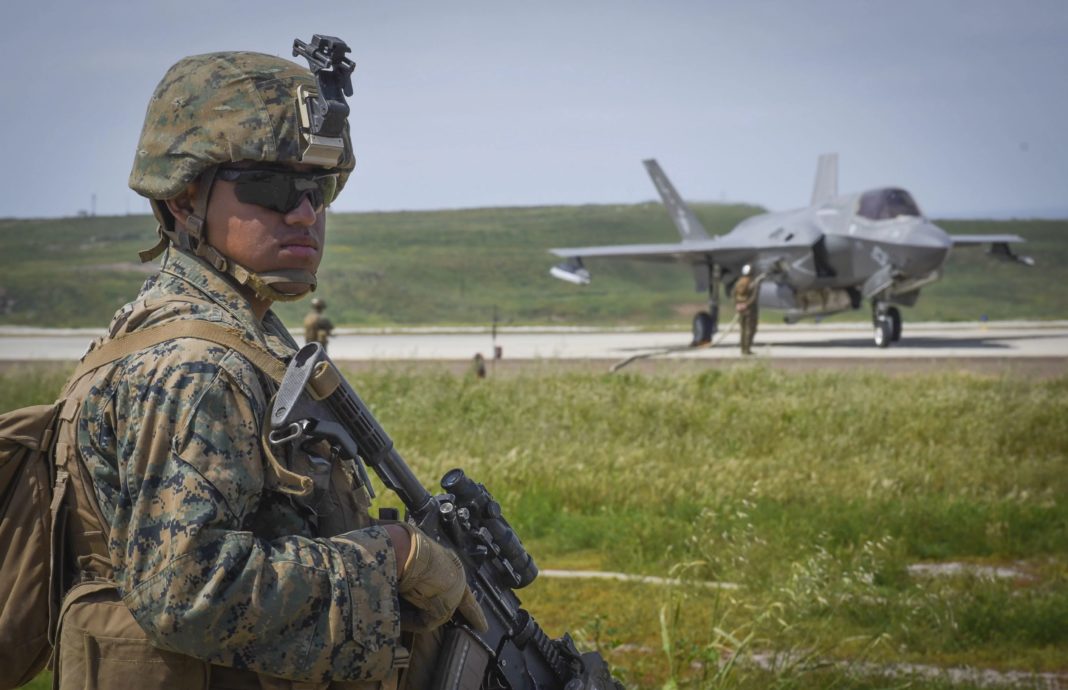 A Marine secures a perimeter near an expeditionary advanced base during Pacific Blitz 2019.
WASHINGTON: The Marine Corps’ inability to recruit enough pilots has led the commandant to question the F-35’s place in the already budget-constrained Corps’ future plans, a potentially huge shift for the service that first fielded the Joint Strike Fighter and fought harder than any other service to build it and buy it.
“Our continued inability to build and sustain an adequate inventory of F-35 pilots leads me to conclude that we must be pragmatic regarding our ability to support” the program,” Gen. David Berger says in a blunt new 10-year force design plan. He calls for an external assessment of the aircraft’s place within the service relative to what he’s being asked to do in the National Defense Strategy and the forthcoming Joint Warfighting Concept, a document the Joint Staff is expected to wrap up later this year.
Berger not only singles out pilot shortfalls, but also notes high costs of maintaining and flying the F-35B as factors he’s weighing “in reconciling the growing disparity between numbers of platforms and numbers of aircrew.”
The general has been very clear he does not expect his annual budgets to grow at any point in the near future, suggesting the best case scenario is that they remain flat as he wrestles with fleets of aging planes, helicopters and vehicles which grow increasingly costly to maintain.
The new document also makes it clear Berger has had enough of the service’s Abrams tanks, which were so effective in Iraq’s Anbar province, but offer little utility on small islands in the Pacific. A series of wargames conducted between 2018 and 2019 led the Corps to the conclusion that the tanks are “operationally unsuitable for our highest-priority challenges in the future,” the document states.
While questioning time-tested and iconic weapons like Abrams tanks, and the massive capabilities that the F-35 can bring, “they’re looking at the totality of the force” said Dakota Wood, senior research fellow for defense programs at The Heritage Foundation. “Berger has been very bold in saying we just can’t afford to have small batches of everything,” so he has set out on a path to bear down on what is most critical to fighting a war in the Pacific against a modern Chinese military.
The new force design is slated to phase in over the next decade, but the changes will be seen as early as the fiscal year 2022 budget, slated to drop next February.
That gives the Marines months to build their case for reimagining the force, which includes buying new capabilities like mobile rocket artillery and long-range fires while scrapping legacy platforms like heavy- and medium-helicopter squadrons and towed artillery. The plan also calls for eliminating law enforcement units, bridging companies, three infantry battalions, and anti-aircraft units.
General Dynamics, which makes the Abrams, and Lockheed Martin, which produces the F-35, will certainly have opinions on these moves, as will the other major prime contractors who build the helicopters and ground vehicles and artillery systems to be tossed over the side and the lawmakers who have plants in their states and districts.
“Resistance to change is likely to be strongest for programs that already exist and have stakeholders that support them,” RAND analyst Jonathan Wong wrote in a short essay, but the jury is out on how Congress and Defense Secretary Mark Esper will eventually weigh in on these issues.
It’s not just industry who will want in on these discussions, but policymakers in the Pentagon and lawmakers on the Hill, as well.
“There’s going to be a lot of pushback by people who aren’t up to speed on these current issues who are reaching back to their own previous references of 10, 20, 30, years ago,” Wood said. “Tanks are awesome in urban warfare environments, but if you haven’t thought about the operating environment the Marine Corps will encounter in the near future, these ideas might be difficult to understand.”
Berger appears to be keenly aware he needs to bring the rest of Washington along with him: “A certain degree of institutional change is inevitable when confronting modernization on this scale, and that type of change is hard.”
How hard will become clearer as Berger and his deputies get out there to evangelize for their vision of the future. (PAUL MCLEARY).

As it confronts the ravages of the virus, Italy’s less developed south also faces economic...

The high street will experience a staggered return from coronavirus lockdown – and your shopping...

The Air Force has set Feb. 12-13 at Hanscom AFB in Massachusetts as the first...