Acasă Actualitate “I have mobilized the Department of the Air Force into a wartime... 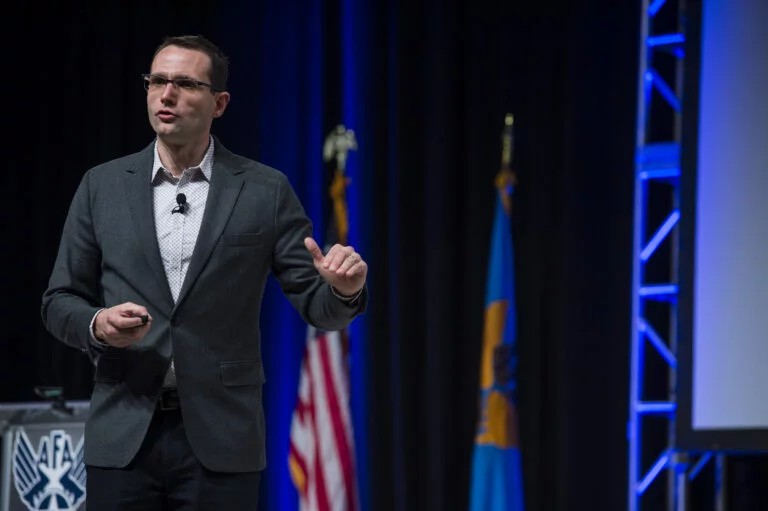 Will Roper, Assistant Secretary of the Air Force for Acquisition, Technology and Logistics
WASHINGTON: The Air Force has stood up a special acquisition task force to help keep its industrial base humming during, and after, the COVID-19 pandemic, says service acquisition czar Will Roper.
“I have mobilized the Department of the Air Force into a wartime acquisition posture, and that is the purpose of our acquisition COVID-19 task force,” Roper told reporters in a teleconference today. “We are at war with this virus.”
The move follows in the footsteps of DoD Undersecretary for Acquisition and Sustainment Ellen Lord, who has set up a number of task forces as the Pentagon puts into place the $2 trillion coronavirus relief package passed by the Senate last night, the House this morning and on its way to President Donald Trump for signature. The package includes $10-plus billion for Pentagon response efforts, including $1.5 billion that could go directly to industry.
“Cash flow and liquidity are everything right now,” Roper explained.
One of key focuses is on small businesses and the startup ecosystem, he stressed, given that the Air Force over the past two years significantly ramping up its efforts to reap technology innovations from the commercial sector.
“All of you know that small businesses are the most vulnerable right now,” Roper said. “We’re going to have to do things differently with our small companies than with our primes.”
As an example, Roper mentioned the move by the service’s new AFVentures arm for startup investment to switch within 72 hours its planned ‘Pitch Bowl’ at the March 13-20 South By Southwest festival in Austin to a virtual event. The event involved some 5,000 participants, he said and resulted in 599 contracts worth a total of almost $1 billion — “the single largest small business transaction in government history.”

“That was one of our first big virtualizing activities within acquisition,” he said. “We flowed critical cash to companies who can burn it against that in their contracts now.”

Further, he said, the Air Force already has put out another solicitation asking small businesses who might be able to help with COVID-19 response “to put their hands up so that we can get additional cash to them or put them on contract if their not already working with us.”

“Relief.” Roper said “these teams are thinking through external assistance requests that may potentially come in,” and how best to apply contracting to move out “billions of dollars if needed.”
“Resilience.” This is focusing on “defense industrial base health issues,” he said. For example, if there are “suppliers under duress, or small businesses that are not getting enough cash flow fast enough,” are there ways the service can help?
“Recovery.” This team will look at what is needed after the crisis lifts. While Roper cautioned industry that “COVID-19 is not a blanket excuse for programs slipping to the right,” he said the service will be mindful that some will do so — thus the “recovery” team will try to figure out what funding those programs might need to get back on track after a schedule slip.
“Being rapid for small businesses.” This effort, Roper said, is led by AFVentures, and is meeting daily to ensure the Air Force spends all of its small business funds. “They have been in training for this for two years,” he said of AFVentures personnel. “They have demonstrated the ability to do more small business contracts that anyone in the government at speeds never seen.”
Roper said that so far there have been “no major delays” in critical acquisition programs, such as the top priority Ground-Based Strategic Deterrent (GBSD) to replace the aging Minuteman III intercontinental ballistic missiles. Indeed, he said he talked with the GBSD team this morning who are “doing business as usual,” only virtually.
Similarly, testing under the Skyborg program not only is moving ahead, but Roper has given that acquisition team the go-head to “accelerate solicitations as soon as they are ready.”
Under the program, the Skyborg “brain” would use artificial intelligence to pilot low-cost “attritable” drones that would provide data (such as telemetry, flight plans and weather) to a manned fighter leading a formation — a job that a wingman’s aircraft normally would do. While so far the only drone body to have flown the Skyborg computing package is the the Valkyrie, built by Kratos, the service isn’t ruling out using others.
One of the key reasons that Air Force acquisition programs can keep moving, Roper said, is because of the service’s past efforts to innovate in the area of information technology. Asked about the some $300 million in the coronavirus relief package slated for DoD to spend on IT to support teleworking, Roper wouldn’t provide the exact Air Force share. But, he stressed that IT is key to DoD’s success not just during this crisis but for the future.
“Information technology in the government has never been an exceptionally high priority, and it’s been one of the most disappointing things to me about joining the government is having to have antiquated 1990s-era technologies to exchange information,” he said.
The Air Force’s “pivot” to begin using commercial cloud technology — now embodied in the cloudONE — has “really benefited” the service as the COVID-19 crisis has unfolded, he said. However, he added, a key barrier to taking full advantage of this tech are out-dated security measures — particularly around classified information — that have been in place for decades.
Therefore, he said, his office is working with DoD CIO Dana Deasy and his Air Force counterpart Bill Marion “to try to smartly look at removing security restrictions and using new technology.” If this effort is successful, he explained, “then we’ll be able to work remotely as long as needed.”
The effort in part is bouncing off of Air Force’s project — under its high-priority Advanced Battle Management System designed to underpin Joint All-Domain Command and Control (JADC2) — to develop the “deviceONE” that can securely allow classified information to be relayed to tablets and handhelds for operators in the field, he said.
The bottom line, Roper said, is that the changes in how the Air Force and DoD as a whole are working in driven by the pandemic are likely to have lasting effects.
“I’m excited to see what the Department of the Air Force will be like post-COVID-19, because with this much disruptive change happening in the government all at once, and rethinking about how we do our business, we won’t go back to being the same department again.” (THERESA HITCHENS).

“Once a chip is designed, adding security after the fact or making changes to address...