Acasă Actualitate The Bell 360 Invictus and the Sikorsky Raider-X will vie for the... 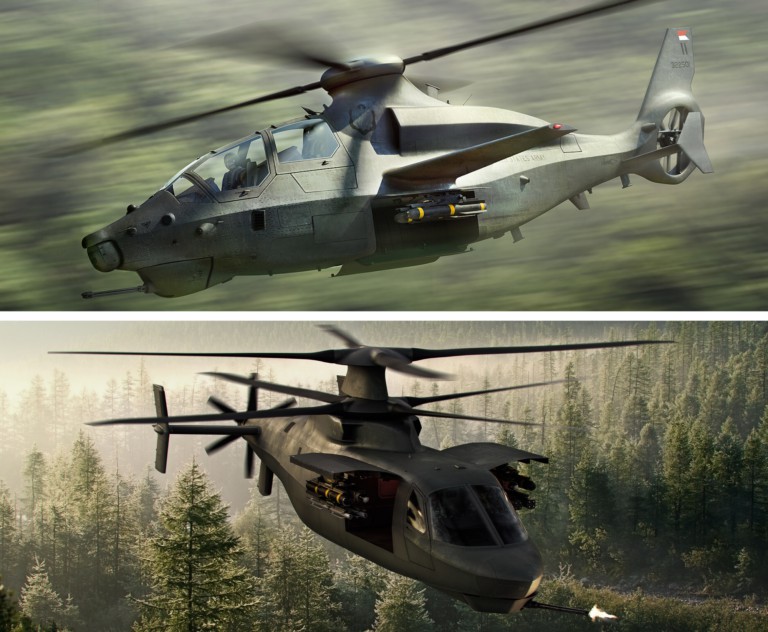 Bell and Sikorsky (with Boeing) are also facing off for the FLRAA transport.

The Army has now narrowed its future aircraft choices to Sikorsky vs. Bell.
This afternoon, the service announced that it had picked Sikorsky and Bell to build competing prototypes for Future Attack Reconnaissance Aircraft (FARA), a high-speed optionally manned scout to replace the retired Bell OH-58 Kiowa. Just eight days ago, it picked the same two firms – plus aerospace giant Boeing, acting as Sikorsky’s de facto junior partner – to compete for the Future Long-Range Assault Aircraft (FLRAA), which will replace the Sikorsky’s UH-60 Black Hawk as the military’s aerial workhorse for everything from Ranger raids to medevac.
There was more uncertainty over the FARA scout, because the service had given five companies Other Transaction Authority contracts to develop designs. Of those five, only Sikorsky had built and flight-tested an actual aircraft, the S-97 Raider, of which its Raider-X design is basically a super-sized version. Sikorsky and Bell now get to build FARA prototypes, while AVX, Boeing, and Karem have been cut.
While AVX and Karem are design houses that have never built an actual aircraft, Boeing is a major aerospace player for which this is just the latest in a series of blows.
Sikorsky and Bell have taken starkly different approaches to Future Vertical Lift. For both the FARA scout and the FLRAA transport, Sikorsky is offering its signature compound helicopters, descended from its record-breaking X2, that use a combination of ultra-rigid coaxial rotors and a pusher propeller to overcome the aerodynamic limits that cap the speed and range of traditional helicopters. No compound helicopter has ever entered mass production, but Sikorsky has built and flown two S-97 prototypes and, with Boeing, the much larger SB>1 Defiant: Raider-X will fall between the S-97 and SB>1 in size.
Bell’s marquee technology is the tiltrotor, most famously the widely used V-22 Osprey, using two massive rotors that tilt forward like a propeller for level flight and upwards like a helicopter for vertical takeoff and landing. It’s a next-gen tiltrotor, the V-280 Valor, that Bell is flying for FLRAA.
But Bell couldn’t scale down their tiltrotor design – whose side-by-side rotors inevitably make for a wide aircraft – enough for the Army’s FARA scout, which is meant to fly down city streets in urban warzones. So instead, their Bell 360 Invictus is, in essence, a streamlined conventional helicopter with wings: It has a single main rotor and a tail rotor, just like the old Kiowa, but it adds winglets to help with lift for high-speed fleet.
Sikorsky argues their compound helicopter configuration is inherently much more efficient, pointing out that Bell’s design requires more horsepower to achieve the Army’s required speeds. Bell argues their time-tested single-main-rotor configuration will be less risky to develop, cheaper to buy, and easier to maintain.
They each have three years to prove their case to the Army. (SYDNEY J. FREEDBERG JR).

DoD officials are extremely aware, almost to the point of paranoia, that even discussing the...

FMS has become arguably the nation’s preeminent tool for building and solidifying relationships with foreign...