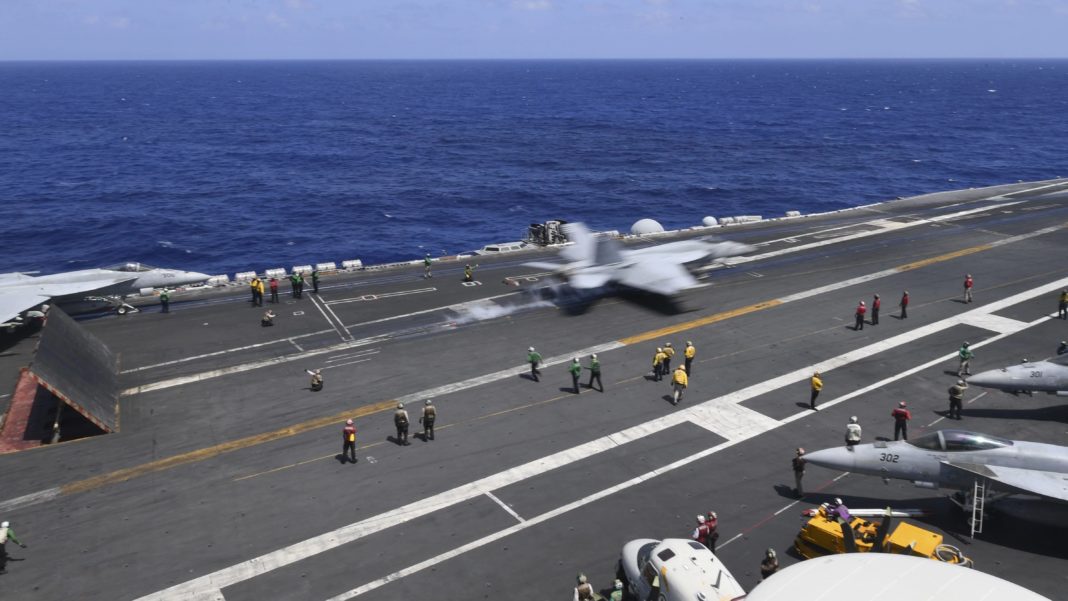 Despite fears the three sailors could have infected dozens of others, “we are not in a position right now to have to pull that ship in or to take that ship off the front lines,” Chief of Naval Operations Adm. Michael Gilday told reporters at the Pentagon.

An F/A-18E Super Hornet launches from the flight deck of the aircraft carrier USS Theodore Roosevelt March 19, 2020.
The infections aboard the ship, currently underway in the Pacific, presents the Navy with by far its most serious test in fighting the virus. The Nimitz-class ship is home to over 5,000 sailors who live, work and sleep in tight quarters, The small workspaces, narrow passageways, and cramped dining facilities aboard a ship make social distancing all but impossible, and the seeming ease with which the coronavirus spreads could present the ship’s crew with major problems.
Despite fears that the three sailors could have infected dozens of other sailors, “we are not in a position right now to have to pull that ship in or to take that ship off the front lines,” Chief of Naval Operations Adm. Michael Gilday told reporters at the Pentagon today.
To help cope with the fact that no Navy ship at sea has any COVID-19 tests, the Navy has canceled port visits across the fleet for everything other than maintenance and supply runs.
The cases were discovered when the sailors complained of high fevers and body aches. Since after which they were given a swab test. Given the lack of tests on the ship, the samples had to be flown to a DoD laboratory ashore, which conducted the tests and then contacted the ship at sea.
Navy officials say those who came in contact with the trio are in isolation aboard the ship, as best they can do that while at sea.
While Gilday and Navy Secretary Thomas Modly ‘Months’ Of Virus told reporters today they’re leaving decisions about how to handle the pandemic to local commanders, Gilday said ships leaving port are entering into a two-week self-quarantine where they will not pull into another port, as Breaking D readers already knew.
Sailors from the Roosevelt and cruiser USS Bunker Hill were being monitored for coronavirus since they left the port of Da Nang, Vietnam this month after a shore visit, Navy officials said recently.
Earlier Tuesday, Defense Secretary Mark Esper and Chairman of the Joint Chiefs Gen. Mark Milley offered their starkest assessment of the COVID-19 situation to date.
To get some idea of the scale of what the military faces now that the virus has spread across the world, note what Esper said: “It looks like it has an eight- to 10-week period. We need to plan for this to be a few months long, at least, and we are taking all precautionary measures to do that, to be in it for the long haul.”
Chairman of the Joint Chiefs of Staff Army Gen. Mark Milley said that timeline, “depends on what we do as a nation to mitigate it, to flatten that curve so to speak. But we, the United States military, we’re going to do this as long as the mission takes.”
Like Adm. Gilday, Esper told reporters that he’s leaving it to commanders to decide what measures to take to lessen the danger to troops contracting coronavirus and how to treat them, but it is unclear how guidelines from the Centers for Disease Control and Prevention are being implemented and enforced across the military.
Esper and Milley’s focus on dealing with the virus for months to come differs considerably from the line coming from the White House. President Trump said on Monday that, “I’m not looking at months…This is going away. We’re going to win the battle.” On Tuesday, he said he wants the country’s businesses “opened up and just raring to go by Easter,” which is just two weeks away. (PAUL MCLEARY).