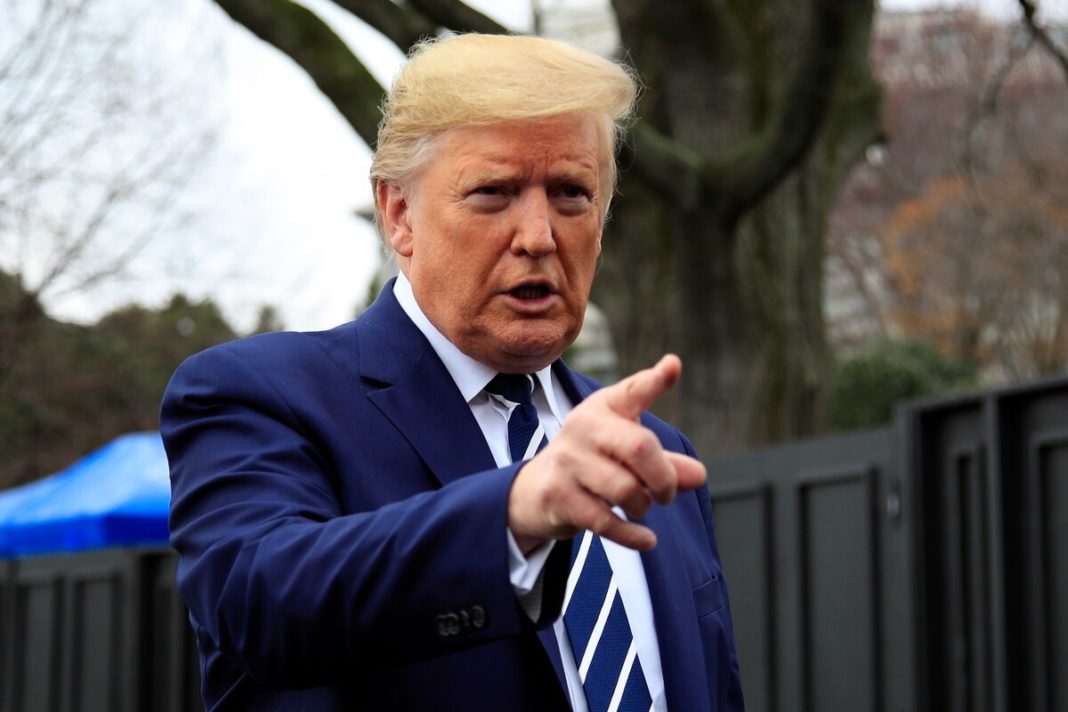 President Donald Trump, in a navy suit and red tie, listens to officials at a press briefing, the American flag behind him.
President Trump’s administration didn’t order life-saving medical equipment until mid-March, new reports show. Win McNamee/Getty Images
In recent weeks, President Donald Trump has moved from dismissing the threat posed to Americans by the coronavirus to styling himself as a “wartime president.” But until mid-March, new reports reveal, he was planning to send the army into battle with only a fraction of the weapons and armor they’d need.
On Sunday, the Associated Press reported that the government largely failed to place bulk orders of N95 respirator masks, ventilators, and other medical equipment vital to those treating coronavirus patients until mid-March, according to federal purchasing contracts. The Washington Post reported that the Trump administration received its first briefing about the outbreak in China on January 3.
On March 12, the day before Trump finally declared a national emergency due to the pandemic, the Department of Health and Human Services placed its first bulk order with 3M for $4.8 million worth of N95 masks. Nine days later, when there were over 30,000 confirmed cases in the country, it placed a larger second order for $173 million. Those masks would be added to the national stockpile, which was created in 1999 in anticipation of potential effects from the Y2K computer bug and expanded following 9/11.
But, the AP reported, the mid-March contracts signed by the federal government and 3M don’t require the company to begin delivering the masks until the end of April — after the White House’s forecasts predict the pandemic will have peaked:
“We basically wasted two months,” Kathleen Sebelius, health and human services secretary during the Obama administration, told AP.
By March 31, according to the Trump administration, more than 11.6 million masks from the stockpile had been distributed to state and local governments. That represents about 90 percent of the stockpile at the start of 2020. According to HHS official Dr. Robert Kadlec’s congressional testimony in March, the US would need about 3.5 billion masks to get through the pandemic.
The Vox guide to navigating the coronavirus crisis
The stockpile also contains ventilators, machines that helps patients in serious condition breathe. At the beginning of March, the stockpile had 16,660 ventilators, some of which were nearly 20 years old, with 2,425 out for maintenance. On March 31, the White House said it had already distributed half of them.
The federal failure to order equipment until it was far too late to mitigate much of the damage is consistent with the denial and dysfunction that has plagued the administration’s response. And it has left other leaders scrambling to fill gaps, rather than coordinating to get aid to the parts of the country that need it the most.
States are scrambling to pick up the Trump administration’s slack
To understand the holes the federal government’s response has left for states to attempt to fill, look at what’s happening with ventilators.
On March 27, Trump pledged to ensure 100,000 ventilators would be available “within 100 days,” saying he’d use the Defense Production Act to order companies to step up production. That means they’d be available in late June, when experts project the virus will be past its peak in the US. And it’s unclear that it will happen; on April 2, FEMA officials said in a House Oversight and Reform Committee briefing that 100,000 ventilators would be available in late June “at the earliest.”
That delay has created dire situations in places like the state of New York, which has become an early epicenter of the outbreak, with more than 4,100 deaths and 122,000 confirmed coronavirus cases as of April 5.
New York Gov. Andrew Cuomo said on April 3 that he anticipated his state alone needing up to 40,000 ventilators for coronavirus patients. FEMA has sent about 4,000 to the state, according to the New York Times. But Cuomo has said he’s essentially stopped assuming that the federal government will be able to help by distributing ventilators to New York from the stockpile. “I know that the ventilator ability is just a problem for everyone — you have 50 states competing for it, you have the federal government trying to buy it,” he said on April 2. “Our attitude here is we’re on our own.”
Because the White House’s strategy for distributing medical equipment and personal protective equipment, such as masks, gowns, and gloves, has been so varied, states have been pitted against one another as they bid for equipment on the open market — or they’ve been forced to take extraordinary measures to obtain equipment for hospitals in their states.
On April 4, Cuomo announced that the Chinese government was sending 1,000 ventilators to New York. Shortly after, he tweeted that Oregon Gov. Kate Brown was sending 140 more.
And Massachusetts Gov. Charlie Baker worked with Patriots owner Robert Kraft, the Chinese UN ambassador, and Chinese officials to ship 1.2 million masks to the state on the Patriots’ team plane. Baker said in a press conference on April 2 that Massachusetts had previously ordered 3 million masks that were seized by the federal government, so in order to “keep the Feds from finding out” about the masks and seizing them, he had to classify the trip as a “private humanitarian mission.”
Gregory F. Treverton, former chair of the National Intelligence Council, said in an April 4 Washington Post article detailing the extent of the federal dysfunction that “this has been a real blow to the sense that America was competent. That was part of our global role. Traditional friends and allies looked to us because they thought we could be competently called upon to work with them in a crisis. This has been the opposite of that.” (Alissa Wilkinson).