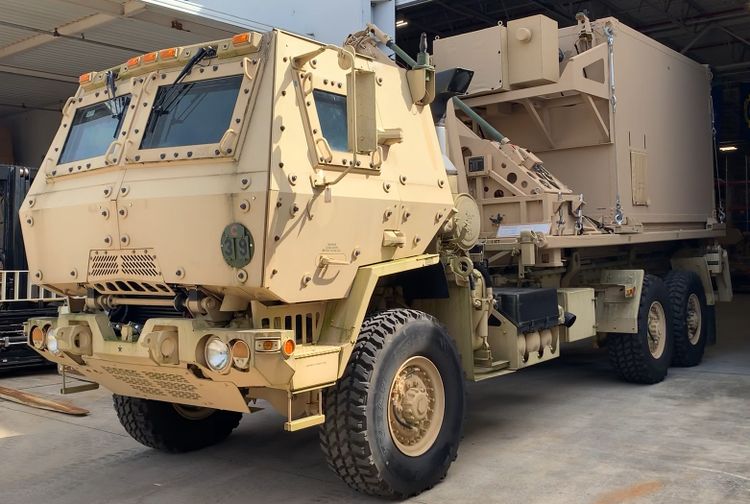 The mobile command post for the Army’s new IBCS air and missile defense network.
WASHINGTON: The Army has indefinitely postponed a major test of its IBCS air and missile defense network to protect the soldiers and civilians involved from the COVID-19 coronavirus, Breaking Defense has learned.
A battalion of air defense troops who’d been training for weeks at White Sands Missile Range have been sent back to home base. Even more important for public health, technical experts from multiple Army agencies and contractors will no longer have to travel to the test.
Known formally as a Limited User Test, the event requires participation from across the country, the head of the Army’s air & missile defense modernization task force, Bring Gen. Brian Gibson, told me in late March.
The LUT would involve both soldiers and civilians from Fort Sill, the Army’s artillery & air defense center; Huntsville, headquarters for the service’s missile procurement; and extensive support from the host facility, White Sands Missile Range, as well as neighboring El Paso, Tex., Gibson said. Other participants would come from even further afield, such as Army Test & Evalucation Command (ATEC) at Aberdeen Proving Grounds.
“There are testers from afar that come in to oversee that test,” Gibson told me. “Those are all variables that are part of this daily assessment on should we, can we, do we continue?”
Ironically, the soldiers training for the test were probably safer than the general public – as long as they were isolated in the desert at the vast White Sands Missile Range. But if one of them were somehow exposed to the coronavirus, Gibson warned, the patient would be in close quarters with lots of other soldiers and a long way away from a hospital.
“Certainly, being away from large population centers is a different dynamic, [and] most of the time that is positive,” Gibson told me in March, “but, also, we’re very cognizant that’s still a pretty large number of individuals we have together in tight quarters that are further away from population centers where most of the health care infrastructure and support is.”
There have been no reports that any soldiers involved have fallen ill.
The test had been scheduled to begin May 15, after weeks of intensive training and preparation. No new date has been set, but if the Army can start the LUT up in July – far from a foregone conclusion – it can keep the high-priority program on schedule.
Why IBCS Matters
What is IBCS? The name is an awkward nested acronym for Integrated Air & Missile Defense (IAMD) Battle Command System. The network is intended to share data and commands seamlessly among a wide range of historically incompatible systems across the Army and, potentially, the other services. As such, it’s the No. 1 priority in the Army’s air & missile defense portfolio, which is in turn one of the service’s Big Six priority areas for modernize.
The program’s been in the works for over a decade with many ups, downs and delays, but the Army and lead contractor Northrop Grumman are confident they have turned IBCS around.
Four years ago, an earlier — disastrous — Limited User Test revealed software problems that led the Army to delay the program four years and overhaul the entire program. Since that 2016 LUT, the Army and Northrup have been bringing soldiers and engineers together frequently to try out the latest software upgrades and make fixes, rather than waiting for feedback from a major test event. The Army even brought in the Air Force for an experiment in which an F-35A Joint Strike Fighter successfully transmitted targeting data on a missile to IBCS.
Compatibility with IBCS is now mandatory for all future Army air & missile defense systems, which has been a stumbling block for the Israeli-made Iron Dome. Top brass have even begun touting IBCS as a key building block of the future Joint All-Domain Command & Control (JADC2) mega-network meant to coordinate all the armed services in a future war with Russia or China.
So the Army and Northrop were understandably eager to show off how well the latest version of IBCS performs. When they’ll have a chance to do so depends less on what they do themselves than on the progress the entire nation makes against an insidious and invisible enemy. (SYDNEY J. FREEDBERG JR.).

“Historically the Arctic, like space, was characterized as a predominantly peaceful domain,” the Air Force...

“If we do come to blows with China, it’s gonna be very confused for the...