INCISIV National
Acasă Actualitate WATCH: Cui Tiankai called for a “serious rethinking” of relations between the... 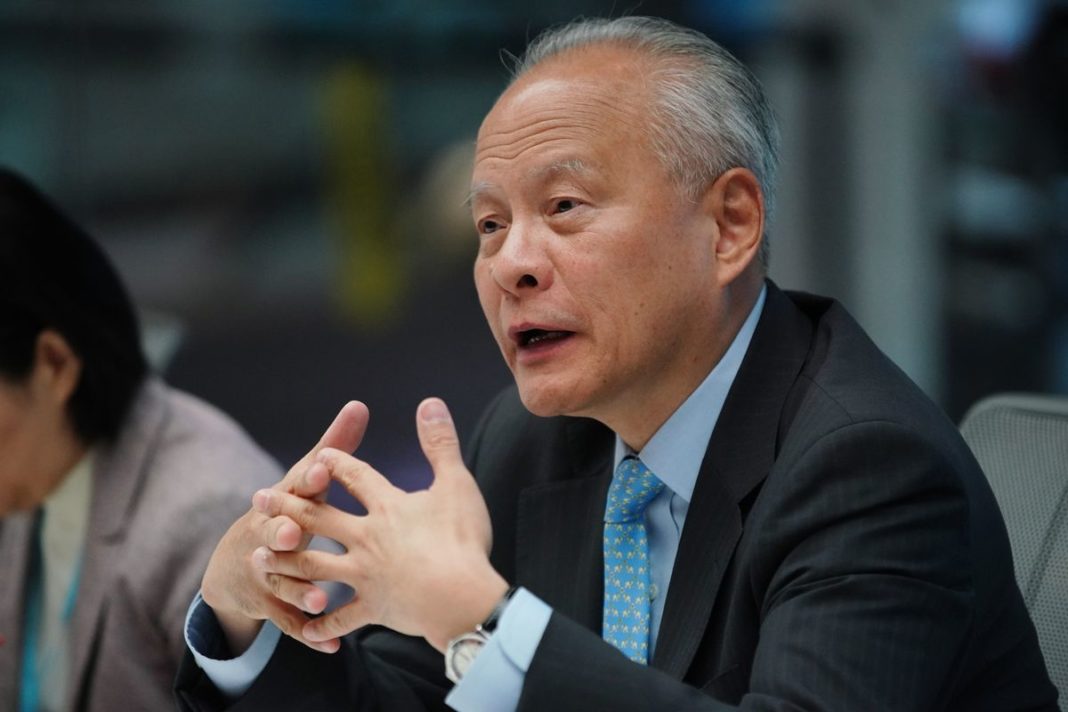 The Chinese ambassador to the U.S. called for a “serious rethinking” of relations between the world’s biggest economies in the face of the global coronavirus pandemic.
“I think I should be hoping for more than just a pause in tensions, but really a serious rethinking of the very foundations of this important relationship,” Cui Tiankai said in response to a question on U.S.-China ties during a Bloomberg New Economy webcast on Tuesday.
Relations between the countries have continued to deteriorate even after President Donald Trump and his Chinese counterpart Xi Jinping agreed last month in a phone call to dial down hostilities.
The U.S. leader, who is facing re-election this year, again fanned speculation about the origins of the virus last weekend when he said China should face consequences if it was “knowingly responsible” for the outbreak. Missouri this week sued the Chinese government for what it alleged was covering up the extent of the coronavirus epidemic. China has denied those claims, saying it has been transparent about the virus all along.
Tracking COVID-19 – 74,​120
New cases reported worldwide, April 22 -183,​287
Total deaths reported worldwide 27,639 in U.S.
Most new cases today -18%
Change in MSCI World Index of global stocks since Wuhan lockdown, Jan. 23 -1.​124
Change in U.S. treasury bond yield since Wuhan lockdown, Jan. 23 -0.​5%
Global GDP Tracker (annualized), March
Cui defended China’s record on transparency, saying the country has shared all information it has with the World Health Organization. He went on to criticize some U.S. politicians for not paying enough attention to views from scientists, instead being “preoccupied in their efforts for stigmatization and groundless accusation.” He added that he’s concerned with the “anything but China” mindset, in response to criticism that Beijing has used medical donations for geopolitical purposes.
‘Shared Vulnerability’
Cui also rejected the idea that U.S.-China ties should be defined as a strategic rivalry, particularly as the countries are now faced with “shared vulnerability” amid the virus. “Hopefully this pandemic will teach all of us a good lesson,” he said, adding that the relationship should “be based on a more realistic, forward-looking foundation.”
Cui said that China has done its best to achieve trust with the U.S., and stands for dialogue as more discussion is needed. “Fortunately at the top level, there has been a good working relationship between the two presidents,” Cui said. “But of course we have to do more at lower levels.”
Cui has emerged as a voice of caution on U.S.-China relations. In March, he distanced himself from tweets by foreign ministry spokesman Zhao Lijian, who speculated that the U.S. Army may have brought the virus to Wuhan. Cui described such speculation as “very harmful” and said investigations of the virus’s origin were best left to scientists. Zhao has since stopped promoting such claims.
Rare Spat Between Chinese Diplomats Signals Split Over Trump
Cui added that China’s development has not come at the expense of the U.S., saying China wants “nothing to do with U.S. domestic politics, we can’t even make sense of it,” in response to a question on who China would prefer to win the presidential election in November.
“American people are most concerned about their own daily lives, and don’t want to make China the centerpiece of their domestic political debate,” he said.

A committee aide said the Navy is “playing a dangerous game” when it includes major...