Acasă Actualitate “Prior to this virus, the deficit was coming down under my administration” 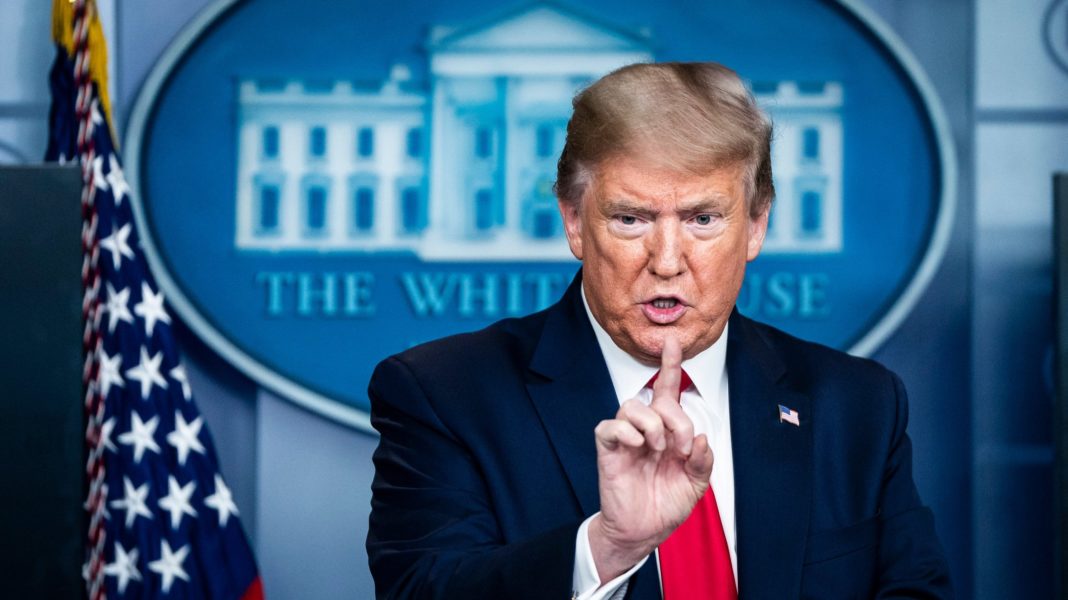 Though the proceedings were ostensibly about the coronavirus, President Donald Trump used Monday’s press briefing to push an odd claim about his stewardship of the budget.
As part of his argument that he oversaw the development of the greatest economy in world history prior to the coronavirus reaching US shores and wrecking things, Trump claimed that “if you look, prior to this virus, the deficit was coming down under my administration.” He said this was due to him putting “massive tariffs on China” — tariffs that resulted in America “taking in tens of billions of dollars” from the country he’s now trying to blame for the pandemic.
A reader pointed out that when Trump’s reference to “the deficit” is read in context of the question he was responding to about China, he may have been referring to the trade deficit specifically with China and not the national deficit. While the trade deficit with China did shrink last year to $345.6 billion from a record of $419.5 billion it hit under Trump’s leadership in 2018, data shows that instead of buying things domestically, Americans just turned to other foreign countries to buy things.

Not only was the national deficit not going down pre-coronavirus, but the Congressional Budget Office announced about a week after the first coronavirus case was reported in the country that the deficit would top $1 trillion this year — a feat that has only been previously accomplished in the darkest throes of the Great Recession.

Furthermore, as this graph from a US government website indicates, the deficit has gone up each year under Trump’s presidency — in no small part because of the budget-busting tax cuts for the wealthy that he championed and signed into law in December 2017.
Beyond the year-to-year deficits, Trump — who promised on the campaign trail to eliminate the national debt — has overseen new records in the accumulation of debt, which is currently approaching $25 trillion.
It’s also not the case that the US has taken in “tens of billions of dollars” because of tariffs on China. Tariffs are taxes on American importers, not foreign governments. They represent a tax increase. While Trump has told this particular lie about how tariffs work dozens of times, what he doesn’t mention is that the ensuing trade war with China resulted in the federal government forking over more than $22 billion to negatively impacted American farmers last year, creating yet another strain on the budget.
There was really no reason to have a coronavirus briefing on Monday in the first place
Following Trump’s widely mocked remarks last Thursday about disinfectants as a possible coronavirus miracle cure, the White House initially announced there would be no briefing on Monday. That changed sometime during the day on Monday.
Press secretary Kayleigh McEnany tweeted that Monday’s briefing would be about “additional testing guidance and other announcements about safely opening up America again,” but in reality it was more about fulfilling Trump’s need for attention.
The early part of the event was a parade of CEOs eerily similar to a scene that unfolded at another of Trump’s briefings last month. The Q&A part featured the White House’s familiar misleading spin about the progress of coronavirus testing, as well as efforts by Trump to reframe the likelihood that as many as 70,000 Americans will die of Covid-19 as actually being a reflection of the great job he did handling things.
Never mind his comments in late February that the virus would go away on its own in miraculous fashion. (Daniel Niculae).