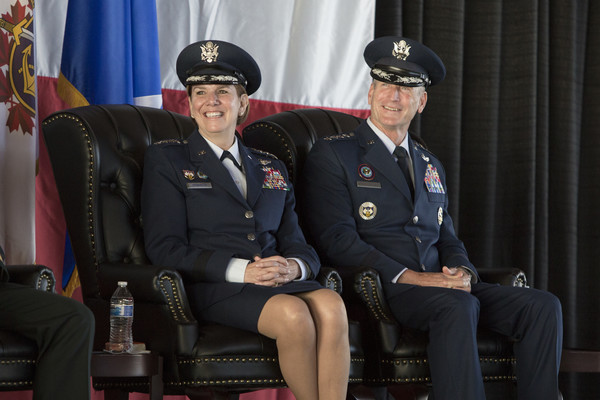 WASHINGTON: Northern Command head Gen. Terrence O’Shaughnessy says the key to winning tomorrow’s all-domain wars is predicting an adversary’s actions — as well as the impacts of US military responses — hours and even days in advance.
The capability to perform such “predictive analysis” will be enabled by the US military’s Joint All-Domain Command and Control (JADC2) initiative for managing high-speed battle across the air, land, sea, space and cyber domains,” he told the Mitchell Institute yesterday evening in a webinar.
“We see JADC2 is absolutely core to the way we’re gonna defend the homeland,” O’Shaughnessy enthused. “And the part that I think is going to be so incredibly game-changing is the ability for us to really use predictive analysis and inform our decisions going into the future.”
“That’s, to me, what JADC2 is going to do: it’s going to inform our decision-makers, it’s going to help them make decisions that, like playing chess, are thinking about two or three moves downstream,” he added. “It’s going to give the decision-makers, at the speed of relevance, the ability to make really complex decisions.”
NORTHCOM was a key player in the Air Force’s first “On Ramp” demonstration in December of technologies being developed under its Advanced Battle Management System effort, which the service sees as a foundation for JADC2. O’Shaughnessy said he is excited that NORTHCOM will be expanding its participation in the next demonstration, now slated for late August or early September having been pushed back from its original April data due to the COVID-19 coronavirus pandemic.
O’Shaughnessy said JADC2 also will be critical for providing much-needed improvements to domain awareness in the Arctic. The US military has to “put together a bigger ecosystem for sensing” rather than relying on “traditional stovepiped systems” in the High North, he explained. That ecosystem needs to fuse information from as many systems as possible — from submarines patrolling beneath the icy waters to ground-based radar to long-endurance unmanned drones to future sensors based on large constellations of Low Earth Orbit satellites — which is exactly the goal of JADC2.
“We have to continue to work on our ability to see the approaches to our homeland and understand what what is there and be able to react to it,” said O’Shaughnessy, who also is the commander of NORAD.
As Breaking D readers know, the US military is turning an increasingly worried eye toward the Arctic where Russia and China both have begun to covet as a future zone of economic wealth as the Earth’s climate opens shipping routes and expands access to undersea oil.
O’Shaughnessy said he sees three areas where more investment is required to up the US military’s game in the Arctic: communications, training, and infrastructure.
Communications at northern latitudes is a particular struggle due to the difficulties of laying fiber optic cable in the harsh terrain, and the paucity of satellite coverage in the region. This, he said, is why NORTHCOM is extremely interested in the potential for so-called proliferated LEO satellite constellations. — both those currently being built by commercial firms and any future military networks.
As Breaking D readers are well aware, DoD’s Space Development Agency is planning a multi-tiered network of satellites in LEO that includes “data transport” satellites to allow faster communications between satellites and air-, land- and sea-based receivers that Director Derek Tournear sees as integral to JADC2.
DARPA also is experimenting with proliferated LEO architectures under its Blackjack program, which plans 20 satellites using various buses and payloads to test their capabilities by the end of third-quarter 2022. DARPA late last month selected Lockheed Martin to undertake Phase 1 satellite integration of satellite buses with payloads and the central Pit Boss C2 system under a $5.8 million contract. SEAKR Engineering announced on April 28 that it had been granted a sole source Phase I, Option 2 contract (under a three-phased program plan) to develop a Pit Boss demonstrator, beating out two other teams led, respectively, by BAE and Scientific Systems.
“One of the things we find is after you get above about 65 degrees or so north, some of our traditional means of communications really start breaking down,” he said, “and once you get closer to 70, almost all except for our most exquisite communications capability really starts to break down. And so we see a need to relook our ability to communicate in the Arctic” — with proliferated LEO “one of the best approaches.”
“If you look at some of the companies out there doing incredible things, we see that as a solution set to allow us to communicate in the Arctic in the relatively near future, and that will be critical,” he added. (THERESA HITCHENS).

Amidst the usual calls for government reform and corporate responsibility, the Cyberspace Solarium Commission makes...