Acasă Anchete Work on the missile tubes for the Navy’s part of the nation’s... 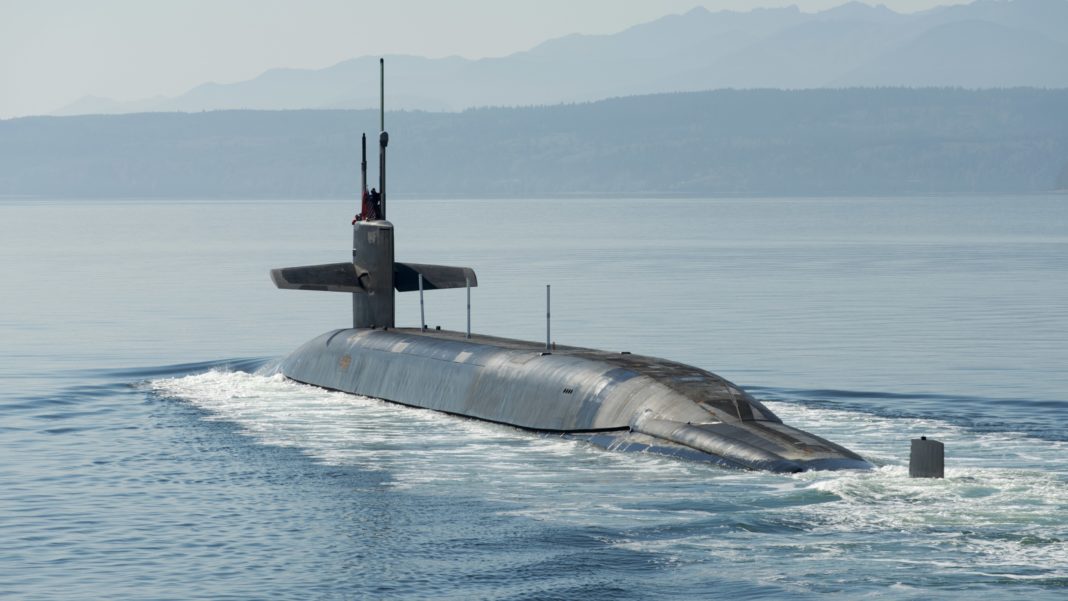 The Navy’s top priority — its new nuclear-powered Columbia-class submarine — has been struck by the COVID-19 virus. Workers’ absences at a critical supplier have delayed construction and welding of the boat’s missile tubes by several months a senior Navy official said today, and the service is scrambling to make that time up.
While the service and its contractors are looking for ways to reclaim that time, the situation is something that Navy and Pentagon officials have most feared. Large-scale work on the first of the twelve planned Columbia submarines is slated to kick off in 2021, with deliveries starting in 2030 — just in time to begin replacing the Cold War-era Ohio-class subs as the Navy’s leg of the nation’s nuclear triad. The subs will carry 70 percent of the warheads allowed by the New Start treaty with Russia.
Head of the Columbia program, Rear Adm. Scott Pappano, said during a video conference sponsored by the Advanced Nuclear Weapons Alliance today that the work experienced “a hiccup” earlier this year when less than 30 percent of workers at UK-based Babcock Marine showed up for work during the height of the COVID outbreak, leading to setbacks in the work schedule.
“There was an interruption in our ability to do work,” Pappano said, calling the delay of several months a “worst case” scenario that would stick if no actions were taken to speed up work going forward.
“We’re analyzing the plan right now,” he added. “Prioritizing what tubes go where and then coming up with mid-term and long-term recovery plans to go deal with that.” Pappano said the Navy and industry may hire more workers and bring in more vendors to buy that time back.
The missile tubes have already caused the service some pain. In 2018, contractor BWX, contracted to deliver three tubes to Electric Boat, discovered problems before the tubes were delivered, eventually paying $27 million to fix the problems. The company later said it is considering getting out of the missile tube business with the Navy, leaving BAE Systems as the only US-based company capable of doing the work.
The Navy is walking a tightrope on its Virginia and Columbia programs, and any slip on one program will affect the other. The two share the same missile tube design, which will also be fitted onto the UK’s forthcoming Dreadnaught class of submarines.
“One of the biggest risks to Columbia is if Virginia gets out of its cadence,” James Geurts, the Navy’s acquisition chief, told reporters late last year.
Once the Columbia subs begin rolling out of Electric Boat’s shipyard, the Navy will have to produce one Columbia and two Virginias per year, a pace of submarine building the service has not seen in decades.
But Columbia will remain the Navy’s top focus. Geurts said he’s structured both programs in a way that the shared supplier base is aware of what’s needed well in advance, but “if not, we can back off a little to make sure Columbia is successful.”
Despite the setback, Babcock’s workforce has recovered in recent weeks, “and essentially they’re above 90% capacity” on the production line, Pappano said. “So my assessment is they’re essentially back up — or close to it — not where they were before” the virus struck. (Daniel Niculae).

“The Guard and Reserves have existing space capabilities and talents that fit within the mission...

Future commanders will need to know how to use artificial intelligence to make decisions—including when...