INCISIV National
Acasă Actualitate Despite COVID-19, the SB>1 Defiant team is testing furiously to catch up... 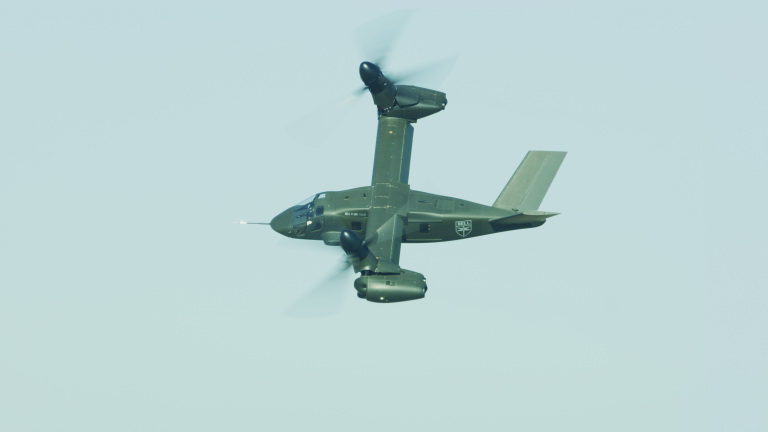 Defiant compound helicopter reached 205 knots (235.9 mph) in a flight test last week, and it did so while running its engine at less than half power, Sikorsky test pilot Bill Fell said this morning. Once ground testing this summer confirms all systems are ready – and one such test was audibly whirring in the background as Fell spoke with reporters this morning – the aircraft will ramp up to full power over time, reaching a projected 250 knots (287.7 mph) “within a few months.”

By comparison, the UH-60 Black Hawk that Defiant is vying to replace maxes out at 193 knots (222 mph). So Defiant, a joint Sikorsky-Boeing product, is already faster than the Army’s current helicopters. But it’s not faster than Bell’s competing proposal for a Black Hawk replacement, the V-280 Valor, which has already exceeded the 280 knot (322 mph) goal for which it’s named.

Why does this matter? Army tacticians believe the Future Long-Range Assault Aircraft will have to rapidly cover long distances at low altitude to evade Russian and Chinese-style anti-aircraft defenses. At those low altitudes, agility and keen sensors are equally important: You don’t want to fly under enemy radar only to fly into a power line.

Sikorsky argues their award-winning X2 compound helicopter technology is inherently more agile than Bell’s broad-winged tiltrotor design. The Defiant’s ultra-rigid coaxial rotors make it much more responsive to controls than traditional rotors, which have a lot of wobble, Fell and his fellow co-pilots say. Defiant’s pusher propeller can switch from providing high-speed thrust to acting as a giant brake, letting the aircraft dash past anti-aircraft batteries and then stop suddenly to land troops or hide behind a building. In fact, Fell is so happy with how Defiant handles, he said today, that on coming into land after the 205-knot flight, he banked the aircraft at a 45-degree angle — 50 percent steeper than the 30-degree maximum that had been set for this stage of flight test.

Now, the Sikorsky-Boeing team is still playing catch-up to Bell on multiple fronts. The V-280 has banked at angles steeper than 50 degrees, for instance. V-280 has reached an altitude of 11,500 feet, while Defiant is still around 10,000.

Bell has also flight-tested software to fly Valor autonomously, without a human on the controls (although a test pilot remained aboard as a safety backup). The Sikorsky-Boeing team says they have tested similar software in simulations, but not yet in the actual Defiant aircraft. While Fell says the current controls let him maneuver the aircraft just fine during test flights, which take place in clear skies, additional computer assistance to spot and avoid obstacles will be a life-saver during high-speed, low-altitude flights at night or in bad weather.

(Both aircraft are also coping with COVID. Bill Fell and his co-pilot now wear masks in the cockpit, while the engineers monitoring test telemetry have split into two teams using two different rooms).

Overall, since the Bell prototype first took to the air in December 2017, it’s racked up more than 170 flight hours, including some with Army pilots aboard. The SB>1 Defiant didn’t have its first take-off until March 2019, in part due to manufacturing issues with the ultra-rigid rotors that are key to its agility; that, combined with subsequent mechanical troubles, mean it’s just recently reached 18 hours of flight time.

The Defiant prototype has also done another 20 hours of ground runs, the companies said today. Its Propulsion Systems Test Bed – basically, a complete Defiant powertrain from engine to rotors – has done over 113 hours. (It’s the PSTB that was revving up outside Fell’s office during his call this morning). Sikorsky and Boeing have also done extensive computer modeling and simulation.

Sikorsky and Boeing will get the Army all the test data it needs before the fall, the Army’s aviation modernization director, Brig. Gen. Walter Rugen, said in March. Indeed, the 18-month contracts the Army awarded in March for what’s called Competitive Demonstration & Risk Reduction don’t require any flight testing at all.

Instead, the CDRR phase is all about refining the designs. In fact, to speak with reporters this morning, Fell and two other key Boeing-Sikorsky executives had to log out of an ongoing design review their teams were holding online with the Army.

“It’s going on right now,” said Jay Macklin, Sikorsky’s director of business development for Future Vertical Lift aircraft. “Literally. We all just stepped out of it.”

“There are probably 50 different configurations” being looked at for the final design, added Randy Rotte, who’s Boeing’s marketing director for FVL. All the different variations would probably look identical to the layperson, but in one iteration, the design team may try to squeeze out every possible knot of speed, in another they may prioritize fuel efficiency and long range, and in yet another they may aim for minimum cost, working through hundreds of highly technical tradeoffs trade-offs. The Army decides which permutations are most promising, and the companies focus their efforts on refining those chosen designs – which they then bring back to the Army for another round of feedback, repeatedly, until you’re left with a single optimized design.

That way, by the time the Army makes its final decision between Defiant and Valor – currently scheduled for 2022 – “you’re not starting cold,” Rotte said. “You already pretty much have a design, and then that supports the Army’s schedule …to bring this capability into the force by 2030.”

Rotte, Macklin, Fell, and the Sikorsky-Boeing team all fervently hope, of course, that the aircraft entering service circa 2030 – defense budgets permitting — will be their Defiant. It’ll be a tight race with Bell’s V-280 Valor. (Sydney J. Freedberg Jr.).

Ivan Lokere (Alinso Group): There is a promising future at the other side of the...